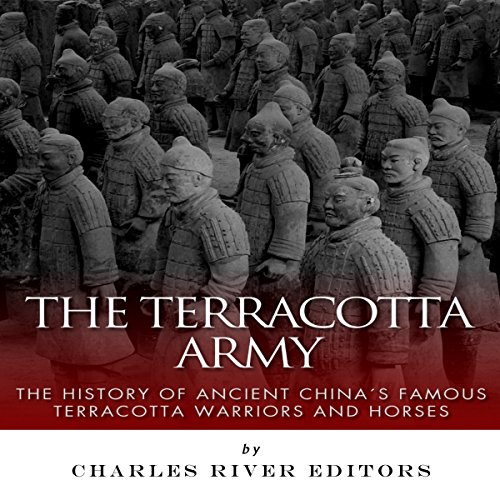 By: Charles River Editors
Narrated by: Curt Simmons
Try for $0.00

"The terracotta army was a one-off creation, original in both concept and execution, unmentioned in any source, no sooner buried than destroyed and forgotten. ...Why so realistic? Why this many? Why full-size? Why clay? ...The initial inspiration was the need to duplicate a new force, of which the main element was infantry, conscripted from the emperor's newly acquired masses of peasants, and protected not with custom-made armor but with scales of leather and simple, standardized weapons. It was the combination of archers, infantry and charioteers, this particular balance between officers and men, that had enabled the First Emperor to unify the nation." - John Man, The Terracotta Army: China's First Emperor and the Birth of a Nation

China has always fascinated outsiders, much in the same way that distant light fascinates someone looking down a dark road. It is both familiar and mysterious, ancient and new, and fully understanding it seems to always remain just out of reach. From the Great Wall to the ancient teachings of Confucius, China's natural and man-made wonders have been topics of interest among Westerners since the Middle Ages and the pursuit of trade routes both by land and sea, amazing Marco Polo and 19th century British expeditions in similar ways despite the passage of several centuries between them.

For these reasons, it comes as little surprise that people across the world were excited when it was revealed in 1974 that archaeologists had uncovered a new and amazing find: an underground army consisting of thousands of clay soldiers, still standing at their posts despite being over 2,000 years old.

What listeners say about The Terracotta Army

Short and to the point.

This is an excellent primer for anyone studying or visiting Xi'an, China. The book explains who the main players were, what their motivations were and the historical outcome of those acts of power. Happily, the author stays focused. The narrator is in good voice. Recommended.

This is a informative introduction to the Terracotta warriors. It is very good for travelers.