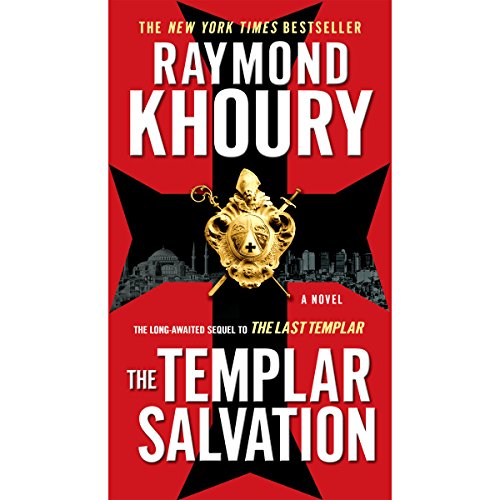 By: Raymond Khoury
Narrated by: Richard Ferrone
Try for $0.00

At last, the book more than a million fans are waiting for: the sequel to The Last Templar.

With its iconic title and unmistakable cover, Raymond Khoury's million-copy- selling The Last Templar remains one of the most memorable thriller publications of the last decade. Finally, after four long years, Khoury returns to the world of the Templars with The Templar Salvation, a sequel that's every bit as eye-popping and as gripping as its predecessor.

Constantinople, 1203: As the rapacious armies of the Fourth Crusade lay siege to the city, a secretive band of Templars infiltrate the imperial library. Their target: a cache of documents that must not be allowed to fall into the hands of the Doge of Venice. They escape with three heavy chests, filled with explosive secrets that these men will not live long enough to learn.

Vatican City, present day: FBI agent Sean Reilly infiltrates the Pope's massive Vatican Secret Archives of the Inquisition. No one but the Pope's trusted secondi get in - but Reilly has earned the Vatican's trust, a trust he has no choice but to violate. His love, Tess Chaykin, has been kidnapped; the key to her freedom lays in this underground tomb, in the form of a document known as the Fondo Templari, a secret history of the infamous Templars.

With his trademark blend of incendiary history and edge-of-your-seat suspense, Raymond Khoury's The Templar Salvation marks a triumphant return to the rich territory that launched his best-selling career.

“[A] sublime narrative. The result is a full-throttle action-adventure thriller wrapped in a political cautionary tale with a gratifyingly eloquent center.” (Library Journal)

“[A] very well-constructed blend of historical mystery and present-day thriller....There’s no denying he’s got the storytelling chops.” (Booklist)

What listeners say about The Templar Salvation

A book that "jumped the shark"

I am well-read in this "Da Vinci Code"; "Angels and Demons"; Templar mystery type books.

I enjoyed this book, generally, except for two important things:

1. The narrator's voice did not fit the role of "Tess". He cannot do female.

2. Once the "things" (don't want to put spoilers here) are discovered and Tess gives her diatribe about why they are so important...well..that was the "jump the shark" moment for me.

Yes, it's fiction. I get it. However, it would be nice if Khoury knew more about worldviews, the tenets of the religions his writing likes to bash, the way science does not coordinate with "Tessa's" diatribe.

Until this, which is at the end, I did not feel the author had a hidden agenda. Just a good (not gripping but good) book ... until the diatribe and then Khoury showed his hand.

To bad about that, I think. His book would have been more enjoyable and closed with less "soapboxing" if he had been able to separate some of his, apparently, ill will towards organized religion and just, simple, basic good and enthralling writing.

This was impossible to listen to. After the first half the bad guy has guns and bombs that are inexhaustible. While on the run stealing cars he has supplies that would require heavy supply trucks. Suddenly I thought, this reminds me of "Christmas Story" when Ralphy is shooting the bad guys in stripes with his bb gun. Save your money and time , pick something else.

more of the same

This is the sequel to the Last Templar. Again, agent Sean Reilly is in a race against a terrorist to unravel another Templar secret that will reveal the location of unpublished gospels. The premise is that the contents of these gospel will contradict current Christian teachings and send the Christian world into chaos.

Reilly, and his girl friend, Tess chase the terrorist and clues to this lost Templar treasure. Much of the cleverness in following clues to solve the 700 year old puzzle are abandoned as modern day keepers of the secret simply blurt out what they know to Reilly for no apparent reason...

For my tastes, there was much, too much detail in the fight scenes..especially the final fight scene which I thought would never end. If you like these Templar Knight stories, you will likely enjoy this one but it does not really stand out in anyway over the Last Templar or similar stories by other authors (eg Steve Berry)

Not one of Khoury's best...

I've read and enjoyed just about all of Raymond Khoury's books...except Templar Salvation, this is definitely not one of his best audiobooks. The storyline seems to drag and it's too much of an effort to keep engaged in the story.
The readers voice is very distracting, I found myself keeping a running tally of the mis-pronounced words.

I'd pass on this book.

I listen to audible whilst driving my truck. During the final fight, I was fully rooting for Reilly. I even honked my horn and fist pumped the air when he was done. great job!! 🤘🤘🤘🤘🍻

This is a great sequel.

I throughly enjoyed the Last Templar, so I was sceptical of this sequel. But it was terrific!!! I couldn't have enjoyed it more!!!

I love the characters and think that the author gives you enough about them and their history to feel as though you understand them. Raymond does this without taking time away from the story where others chose to take a bit too much time on that subject.

The book is an amazing fictional work of art I absolutely love that it is filled with History, facts, real places you may have never heard of and so much more.

Finding a book that can thrill you and become so addicting while in fact you are learning about our planet, our history and possibilities that may some day prove to be fact blows my mind.

The Author does need to watch repetition of a word or expression that "makes me let out a small chortle" is my only complaint & Its so little I hate to call it a complaint.

Love you Ray, Tess & Sean too!

If you are looking for an alternative to Dan Brown's books, skip this one. Frankly, it was just plain silly. And, the narrator becomes most annoying after a while - his voice comes from his nose. Being used to John Lee and Simon Preeble's performances, I found this narrator's reading more of a distraction than attraction. I think even the Templars would be disappointed in this one!

I love these books. They are exciting to read and I enjoy the remote locations. I find myself googling the places and find them exactly like they were described.