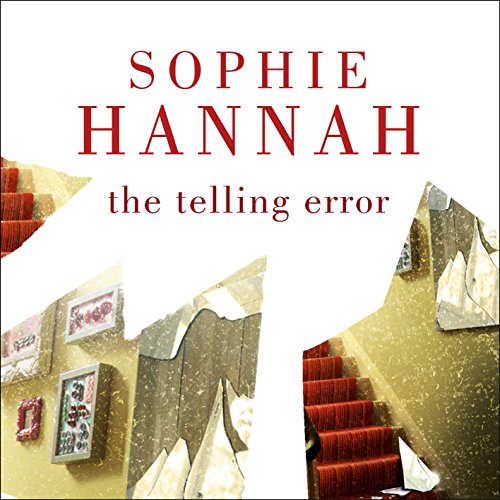 By: Sophie Hannah
Narrated by: David Thorpe,Julia Barrie
Try for $0.00

Stuck in a traffic jam, Nicki Clements sees a face she hoped never to see again. It's definitely him, the same police officer, stopping each car on Elmhirst Road. Keen to avoid him, Nicki does a U-turn and makes a panicky escape. Or so she thinks.

The next day, Nicki is pulled in for questioning in connection with the murder of Damon Blundy, controversial newspaper columnist and resident of Elmhirst Road. Nicki can't answer any of the questions detectives fire at her. She has no idea why the killer used a knife in such a peculiar way, or why 'he is no less dead' was painted on Blundy's study wall.

And she can't explain why she avoided Elmhirst Road that day without revealing the secret that could ruin her life.

Because although Nicki is not guilty of murder, she is far from innocent...

What listeners say about The Telling Error

Best yet, can't wait for the next one

I love this series and author. She's not for everyone but if you like the long meandering twists and turns plot wise and psychological wise of Gillian Flynn you'll love these. This was definitely the best yet and after blowing through all of this series in the last few months I'm sad to have to wait. I also liked having multiple narrators, since the books have the division I think the audio should too. My only complaint is all the rest of the books and the facts of the character make the name Proust rhyme with boost, not like proud with an st. It's supposed to be the same as the author. Otherwise I liked the performance.

I have already suggested it to two friends. It was such an incredible read. Also, the wry British humour was exactly what I wanted, along with the mystery, of course.`

What was one of the most memorable moments of The Telling Error?

There were quite a few. if pressed, I would say the scene with the school mistress when Nicky takes in her son's gym kit. Also, the encounter of Simon with the two ex-wives. Many.

Have you listened to any of David Thorpe and Julia Barrie ’s other performances before? How does this one compare?

Probably. The readers were brilliant. GREAT.

When Nicky reads the letter about her secret. About her family home life as a child. Poignnt and very realistic.

I have read every mystery in this series (some I had to get from the UK as not all are available on US Audible. While all are really good, this one just sent me over the top. I loved everything about it. The grasp of the complexities and hilarities of social media had me gasping at times. So very, very spot on.

Takes awhile but worth it

This story is different but interesting in the way it is told. It is told as a series of disconnected and yet cohesive vignettes so that the telling jumps between characters and situations, and then on to another character and situation. The heroine is both pitiable and likable as her story unfolds within the larger story. The situations, behaviors, and turns have the feeling of being new and this keeps the reader's interest.

The performance is well done. The characters are distinguishable and yet, there isn't much difference between the voices. There are no extreme voices used to separate a character. They are all middle of the road and yet not confusing or muddled. Well done.

This is the same book as Woman with a Secret! Yet they are both offered for purchase!

What a terrible boring audio book

The endless reafdng of e-mail messages with full url, time and date takes too much space and is slowing the flow of the story down

This thing drags on and on and on....

What was most disappointing about Sophie Hannah’s story?

Took too long to get to the point, and all that reading of the email and text headers was excruciating.

What does David Thorpe and Julia Barrie bring to the story that you wouldn’t experience if you just read the book?

Was The Telling Error worth the listening time?

Not all of it.

I am just writing this review to remind myself that I can't stand to hear Julia Barrie speak, and I never want to buy another book that she narrates.
Apart from that, the story is really good, and I recommend it to anyone who doesn't mind the way this female narrator pronounces words.

Would you consider the audio edition of The Telling Error to be better than the print version?

Apples and Oranges - both tasty fruit

Smooth out some of the tangles of same character - different name.

Have you listened to any of David Thorpe and Julia Barrie ’s other performances before? How does this one compare?

Not that I recall. But I do prefer one narrator to two or more. Just read me a story, not a radio drama.

I always enjoy Sophie Hannah. But the relationship between the two detectives is wearing thin for me. More mystery, less marriage, please.

Good as ever but irritating Male narration

Having enjoyed the whole Culver Valley series, I felt somewhat let down when Giles Proust not only changed the pronunciation of his name but his accent and whole personality. You wouldn’t think that was possible when just narrating what is written but so much is in the tone of voice. Why are new narrators for a series not asked to listen to previous books? Or told how to pronounce.names? Seems very lax to me. Luckily he didn’t have a big part in this story as it would have ruined it.

I used to be a passionate fan of Sophie Hannah. "Little Face" was nothing short of brilliant, and the next 2/3 in the "Culver Valley" series were (almost) equally as good. If you're a lover of the "puzzle unravelled" type of mystery I'd recommend any of these.
However from there I'm afraid things have gone downhill fast.
Ponderous prose, weak characterisation and plodding tempo seem to have become the order of the day.
I'm afraid that this one is quite possibly the worst of the lot.
To call the plot contrived and convoluted would be the nicest thing I could say about it.
Compared with her earlier work I'm afraid this is starting to feel like "ok I suppose I'd better knock out another one". I'm reading dialogue I really don't care about from characters I used to love but who have become...... monotonous I'm afraid.

It's sad, but I think it's time for me

The accent used for Damon Blundy was the most aggravating narration ever experienced in a Sophie Hannah audio book. It made me want to fast forward every time. Would have much rather had Julia Barrie narrating the male parts in the book as usual.