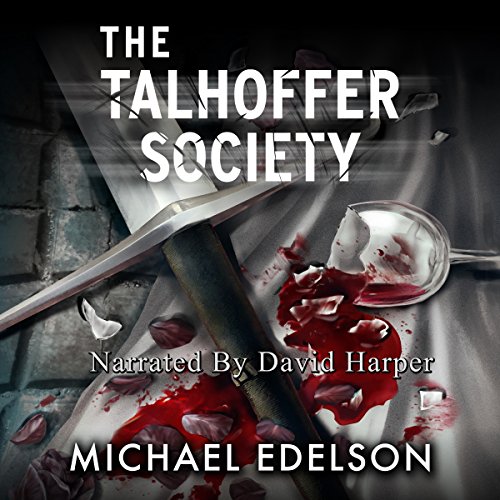 By: Michael Edelson
Narrated by: David Harper
Try for $0.00

He came to stop it, she came to win it. The tournament will change their lives forever. If they survive.

If you readily frighten, you should never learn fencing.

As a champion longsword fencer, Jack Fischer receives many invitations to tournaments, but none like this: few details, no return address and thousands of dollars in cash that is his to keep whether he accepts or not. He wants nothing to do with it until a multi-national task force recruits him to help bring down the organizers, a society of modern duelists who fight to the death for the gratification of wealthy patrons.

Surrounded by opulence, glamour, and the respect of powerful benefactors, Jack finds himself fighting the desire to prove himself in combat and vindicate his life's work. His loyalties are further strained when he meets Frederica, a woman whose skill with a sword rivals his own. Struggling with a disease that is ravaging her body, she has come to the tournament to win the means to pay for her treatment or to die trying.

But underneath the pomp, the lofty ideals, and promised wealth, neither the tournament nor its organizers are what they seem, and Jack is forced to face an impossible choice between love, self-preservation, and honor in a place where the only truth worth finding may lie in a pool of his own blood.

What listeners say about The Talhoffer Society

Where does The Talhoffer Society rank among all the audiobooks you’ve listened to so far?

If you are a fan of the first Die Hard movie you will really like this book.

Solid quality and great performance by the narrator. His voice was steady and had some life and expression but not too much to get on your nerves.

The Talhoffer Society boasts a very unique topic - it pits european martial arts and culture vs asian martial arts and culture. It is very intriguing to listen to because it provides an insight into a mind of a modern day martial artist. He seeks validation of his fighting techniques and abilities, an unusual concept in modern day and age where people are not as involved in martial arts. Naturally, the main character becomes an unwanted participant in a hurricane of events. He is forced into making choices that would have unforeseen permanent consequences on his life. The book both educates the reader and guides him on an action adventure. The author has rich knowledge of the subject as is shown by excerpts from historical fencing manuals, combat and training description.

My favourite character is Boris. He gets the most character development in the course of the story. He gets to deal with difficult moral issues and resolve them on his own through a lot of inner struggle.

Fight scene of Jack and Marone. It is very psychologically intense part of the book for many reasons. Also it is main character's first encounter with mortality.

This book is brutally honest towards european martial arts. Since the whole branch of it is so young and so much has been lost in ages compared to kendo and other martial arts, the practitioners are faced with ridicule or misunderstanding. What really moved me was the fact how difficult it is to get a recognition and be taken seriously in a growing art like that.

Also, very graphic description of MS symptoms. The author makes a lot of philosophical points along the way of showing the progression of the disease in an afflicted person. It certainly raises awareness to the issue.

I specifically made an audible account to listen to this book. great "read" almost listened to it in one go.

If you could sum up The Talhoffer Society in three words, what would they be?

I was instantly immersed in the story, and it just kept getting better. The characters are believable and easy to identify with. There is nothing cliche here. The male protagonist is fleshed out just enough to be a sympathetic character but not so much that you can't put yourself into his shoes and see the story through his eyes. The female lead was startlingly real. I feel like I know her in real life after listening to the book. And the sword fights...amazing. I don't know anything about fighting with swords, or I didn't before reading this book, but that was no hindrance. The action is tightly woven into the story, so that every fight advances the plot. A fantastic listen from start to finish.

Have you listened to any of David Harper’s other performances before? How does this one compare?

No, first one. I thought he did a very good job. Not perfect, but then few are, but he is great with dialog and his accents are first rate. For reference, my favorite narrators are Jefferson Mays, Jay Snyder and Luke Daniels. They are, in my mind, the cream of the crop of audible narrators, and while this guy wasn't as good as those three, he is far better than most of the others. I'd listen to his work again without hesitation. The most important thing about him is that he doesn't take away from the story, and even enhances it. That's rare in a narrator.

Buy this book! Just do it! You won't be sorry. You may even get a new hobby out of it. I'm actually considering joining a local sword fighting school.

This was a decent story with a number of twists, some obvious and some clever. The writing is well crafted, though for a book about sword fights, it was surprisingly sparse in their description.

My main complaint is with the narrator, who was so stiff and robotic that I almost gave up early. His characters are fine, but his descriptive voice is very off-putting. However, either I got used to him or he got better.

Overall, absolutely worth checking out.

All a round good story.

I enjoyed every part of it. Especially the pacing. A good story with likeable characters that doesn't get mired down.

great book if you love hema

really fun to listen to, and the action is engaging. i really liked the introduction to each chapter and the author seems to have good knowledge of hema and kenjutsu. I just wish there would have been a little less love story and a bit more Talhoffering.

Michael Edelson writes great action stories, and there certainly are plenty of action scenes in this story. Great plot flow and characters you'll love to either really like or really hate. I loved the relationship between Jack and Francesca and the fact that I now know something about fencing and how to save a limp. LOL. There's a little bit of language and a bit of gore, so I you find that offensive, you might want to choose one of his other books. I was wavering between a four and five-star rating for David Harper at first, but by the end of the book, he had me convinced he was a five. He has a pleasant voice, and his accents for the various character is terrific. His recording quality is perfect. I'd listen to his books again. If you haven't read a Michael Edelson book, you're missing out.

An amazing story that hit me where I live

I'll preface this by saying I do study HEMA. The story of this book is amazing. It feels like something every martial artist would enjoy. I didn't ever find myself bored or drifting. The action is tight and well paced. Nothing is drawn out and the fighting is about as realistic as it can be. I was engrossed in this book and nearly had it all in one sitting. I can see myself going back to it over and over again. The only not so great part is the voice narration. I wish they had gotten someone a bit better. The guy gets better as the book goes along, but for a while at the beginning I was pretty sure that it was a voice program he was so choppy. But this did not remove my enjoyment of the book at all. I would recommend this to any martial artist or anyone who loves a good story.

A Novel Variation on a Clichéd Plot

The martial arts are well done in this book, but the plot is more contrived than it needed to be. The narration is okay, but the characters make moral choices that not every reader may agree with. The plot is full of clichés that are done better in other martial arts stories. What charm this book does have is in its well researched discussion of historical sword arts from Germany, Japan, and Italy. The fights are well written and you root for the protagonists during them. Try this if you like action and don't care about a believable plot, or if you're interested in historical swordsmanship, but if you like complex narratives with good twists or historical conspiracy stories, look elsewhere.

The narrator sounds very robotic when narrating and acting as the main character. Though that's not true for all characters and it either ends up growing on you, or you get used to it.

Everything just comes off as too convenient in the story, though there are fun moments like when the pips are explained.

Action was well described and was probably some of the better parts of this book. I'd like to see the author to take another stab with something involving similar fighting and have a chance to polish out a more interesting story line.

I'd say this is still worth a listen to, especially for those into HEMA.