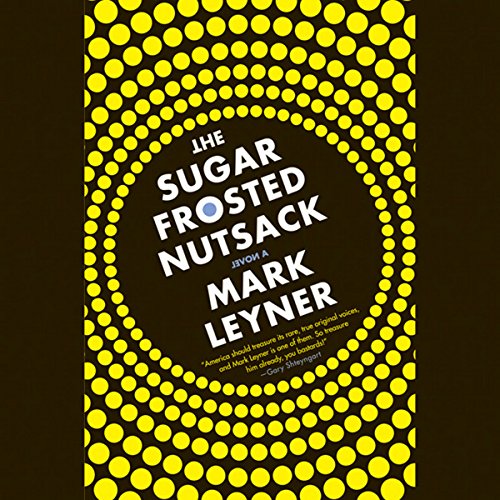 High above the bustling streets of Dubai, in the world's tallest and most luxurious skyscraper, reside the gods and goddesses of the modern world. Since they emerged 14 billion years ago from a bus blaring a tune remarkably similar to the Mister Softee jingle, they've wreaked mischief and havoc on mankind. Unable to control their jealousies, the gods have splintered into several factions, led by the immortal enemies XOXO, Shanice, La Felina, Fast-Cooking Ali, and Mogul Magoo. Ike Karton, an unemployed butcher from New Jersey, is their current obsession.

Ritualistically recited by a cast of drug-addled bards, The Sugar Frosted Nustack is Ike's epic story. A raucous tale of gods and men confronting lust, ambition, death, and the eternal verities, it is a wildly fun, wickedly fast gambol through the unmapped corridors of the imagination.

What listeners say about The Sugar Frosted Nutsack

If you could sum up The Sugar Frosted Nutsack in three words, what would they be?

My favorite character is Ike Karton because he is the "Warlord of his Stoop", attuned to the gods, hurtling toward his fate with so much more than grim resolve. He's a doomed, compulsively hermeneutic, unemployed, anarcho-primitivist gym-rat, and that's just straight sexy.

What does Mark Leyner bring to the story that you wouldn’t experience if you just read the book?

The Sugar Frosted Nutsack is an epic, endlessly recited by blind, drug-addled, vagrant bards. Hearing Mark Leyner recite it is the next best thing to attending an actual live performance.

This is not a normal book. It's a staggeringly recursive construction of text, sub-text and meta-text. It may seem random or overly whimsical on the surface, but it contains deep structure and integrity. It's the funniest book I've read (or heard) in years.

Leyner is HILARIOUS! The people driving next to me at 6AM must have thought I was crazy as I laughed out loud at this book.

His narration was very very good and the book was his best since Et Tu Babe.

Would you listen to The Sugar Frosted Nutsack again? Why?

Yes, I probably will listen to this work again. This piece ranks with Vonnegut's or Tom Robbin's best works as a stunning piece of absurdist fiction.

For me, my favorite character is a toss up between Ike, the protagonist, and XOXO the God of head injury and forgetfulness. Ike throws himself relentlessly to his fate as XOXO tries to sabotage the story. (No kidding.)

Which character – as performed by Mark Leyner – was your favorite?

I really doubt that anyone but the author could have done this justice.

If you could rename The Sugar Frosted Nutsack, what would you call it?

I really appreciate this works way of creating a story and at the same time creating a commentary on the story. It's a bit like having a novel interleaved with a dry academic article about the novel. Very clever.
I get the impression that Leyner really hates critics.

I first heard about the story on NPR interview about 9 years ago. Since then, the title is kicked around my brain, and I’ve always meant to revisit it.

Incredibly glad that I remember the story. It’s freaking fantastic.

Where does The Sugar Frosted Nutsack rank among all the audiobooks you’ve listened to so far?

Up at the top!

The story wasn't that great

Have you listened to any of Mark Leyner’s other performances before? How does this one compare?

I never like when authors do their own books, but Leyner did an amazing job! I think this is the best writer's performance I've ever tasted.

Audible NEEDS more Leyner! I would love to have audiobooks of his old classics.

I wouldn't think of it. The author is the only one who knows how this thing works.

If you’ve listened to books by Mark Leyner before, how does this one compare?

I have not, but it would surprise me if it compares to anything.

What does Mark Leyner bring to the story that you wouldn’t experience if you just read the book?

He may be the only person who understands it well enough to read it with the appropriate inflections and energy level.

If this book were a movie, I would have to go see it just to find out how anyone could possibly turn this book into a movie.

I must applaud the author for inventing such an absurd and colorful dreamworld, and describing it with such obvious enthusiasm. I can't say that I was able to fully engage in it myself. I watched from a distance and got some good laughs. Punishing repetition may play better on the written page than on audio, where the oft-repeated phrases repeatedly trigger an "oh no!, my ipod jumped the tracks" reaction.

What a bitter disappointment!

What disappointed you about The Sugar Frosted Nutsack?

I guess there will never be another Et Tu, Babe.

Has The Sugar Frosted Nutsack turned you off from other books in this genre?

No, but it makes me realize what a rare gem a truly funny books is. So far, Bossypants is the high water mark.

Would you listen to another book narrated by Mark Leyner?

If you could play editor, what scene or scenes would you have cut from The Sugar Frosted Nutsack?

I wouldn't know where to start. The whole book would be in pieces. Which is where Leyner probably started, gathering up random thoughts and piecing them together with the literary duck tape of wacky gods.