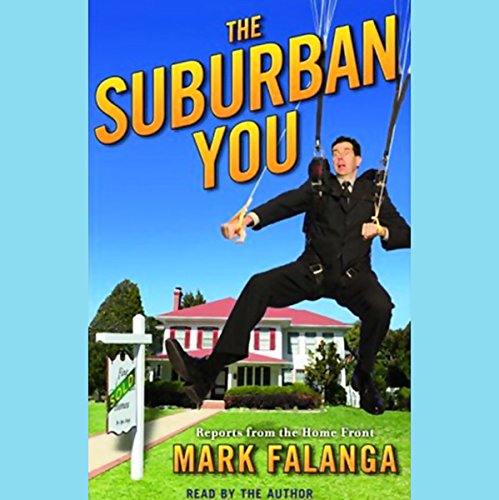 Reports from the Home Front
By: Mark Falanga
Narrated by: Mark Falanga
Length: 4 hrs and 38 mins
Categories: Comedy, Memoirs
4 out of 5 stars 4.0 (2 ratings)

Mark Falanga is a slick urban dweller, at the top of his game professionally, with a gorgeous corporate executive wife and a hip coterie in the coolest neighborhood in the city. But when baby makes three, Mark and his family enter the twilight zone called the suburbs, where public schools are good, many wives stay home, and children ride their tricycles in the driveway.

Nothing is the same ever again.

With the dry wit of David Sedaris, and Dave Barry's love of the absurd, Falanga details his new, suburban landscape from the point of view of a bewildered but gung-ho everyman. From the complex political pecking order in the neighborhood, with its ultracompetitive block parties and its consuming holiday-card rivalry, to the surprises lurking on every corner, such as the 12-year-old pyromaniac next door and the suspiciously broad-shouldered "lady" on the commuter train, The Suburban You describes in slyly understated prose the vicissitudes of life in the 'burbs.

"The Suburban You is droll enough to put a smile on the most cynical urban puss. Falanga's voice is winning and companionable and funny and manages to make such chores as painting his children's bathroom ceiling into a prospect more daunting and heroic than painting the Sistine Chapel. It made me very happy to live in a city, but I certainly enjoyed the outing." (Christopher Buckley)