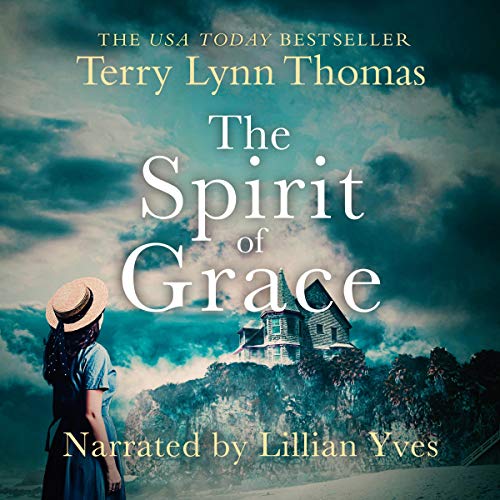 The Spirit of Grace

By: Terry Lynn Thomas
Narrated by: Lillian Yves
Try for $0.00

Sarah Bennett doesn't remember the night her mother tumbled down the stairs at Bennett House, despite allegedly witnessing the fatal fall. There was talk of foul play, dark whispers, and sidelong glances, all aimed at Sarah, prompting her family to send her to The Laurels, an exclusive asylum in San Francisco, under a cloud of suspicion. Now, on the one-year anniversary of her mother's murder, Sarah has been summoned home. Convinced of her innocence, she returns to Bennett House, hoping to put the broken pieces of her life back together. But when another murder occurs shortly after her arrival, Sarah once again finds herself a suspect, as she is drawn into a web of suspicion and lies.

In order to clear her name, Sarah must remember what happened the fateful night her mother died. But as she works to regain her memory, the real murderer watches, ready to kill again to protect a dark family secret.

What listeners say about The Spirit of Grace

Wonderful start to a series

Sarah Bennett doesn’t remember anything about the night her mother took a fatal fall down the stairs in their home. Several people believed Sarah was behind her mother’s death. She was sent to live in an exclusive asylum. Sarah still was not able to remember anything about her mother’s death a year later. Her father has her to come home for the anniversary of her mother’s death in hopes this will help Sarah remember what really happened. Upon arriving at home Sarah finds that her father has remarried a much younger lady. Sarah is determined to remember what happened and clear her name but during her investigations, she discovered a dark family secret.

This is a well-written mystery with a lot of suspense. I really enjoyed Sarah’s characters and I really felt for her and wanted her to remember what happened to her mother. The setting in the book really adds to the story and enhances the storyline. This is a great start to a new to me series. I will be checking out more of this series.

I listened to the audio version of this book. The narrator Lillian Yves as a pleasant voice and is easily understood. Her storytelling ability is definitely an enhancement to the story.

I received this audiobook as a prize, all opinions expressed in this review are entirely my own.

give this a try

The mystery kept me guessing and second guessing myself through the whole book. Loved the narrator that gave each character a unique voice. I really enjoyed this audible.

Found the narration not as compelling as I'd have liked. Chose not to finish. May go get the ebook.

Tense with a twist at the end.

Lillian Yves does a great job bringing the characters to life.

The Spirit of Grace

Oftentimes when I read a mystery I can figure out whodunnit before the end of the book but this book totally took me by surprise!

A circle of nightmares for Sarah Jane. The trauma of losing her mother and taken from her home to asylum. The turmoil in 1942 of the war also. No wonder she doesn’t want to remember. Now to return to those nightmare, only to have murder happen again. A chilling gothic story that was well done, and to figure out who was doing the killing. .given audio for my voluntary review and my voluntary review

I've had it for a few years, but haven't listened to it until now. It's not the typical paranormal book I'm used to. This is more like a historical/mystery with a little paranormal thrown in.

Sarah Bennett returns home after being sent to a mental asylum, following the death of her mother, who fell down the stairs. Sarah discovers her father newly married to someone that is close to her age. The new wife shows animosity towards her. Sarah's father inquires about her memory of that day her mother died, which she has no memory of.

Sarah has had to deal with rumors about people who think she is responsible for her mother's death. Sarah tries to recover her memory to prove her innocence. One night, Sarah dreams, only to wake with her hands injured and once again, is confronted with why she was in a mental asylum.

Sarah develops feelings for the man, who is working with her father, Zeke, but there is a cloud of suspicion around him. In the dead of night, when she sees a figure slip out of the house and rumors of a spy amongst them; Sarah isn't sure who to trust. In her quest to find out more, she learns about a hidden secret.

The story was interesting, although there weren't quite as much paranormal events as I would've liked or used to. It comes across more like a cozy mystery.

I received a free audiobook, and I have voluntarily reviewed this book.

The spirit of Grace

I really liked this book!There was a ghost,murder,spies,war,etc. It was well written,with likable characters.I look forward to more in this series. Liian Yves was a fine narrator. I was given this book by the narrator,author or publisher free for an honest review.

Took Me Back In Time

The story takes place in 1942, experiencing the war and turmoil through the eyes of Sarah Jane, a young woman who has no memory of the night her mother died. A year has passed and Sarah has been summoned home, after spending the last year in an asylum, trying to remember the horrible events of her mother's death. Things have changed in the Bennett house and Sarah hopes that her memory will return and she can finally put the past to rest.
Sarah meets a few people that she doesn't know if she can trust them and works things out to get to the truth. .

What a lovely book

from start to end had my attention
Sarah was a strong character.
thank you Lillian for sharing this book with me and free honest review.
I would recommend this book.

If you could sum up The Spirit of Grace in three words, what would they be?

Sadly i think the performance didn't do the story justice. It was read with an uninterested and monotoned voice. She could have been reading the phone book.

Couldn't say without a spoiler

I liked the setting, and the story. Fell short of 5 stars due to the fact i felt it could have been expanded. It all happened very fast without much fill in detail about the characters or the time set. Enjoyed it overall though

Would you consider the audio edition of The Spirit of Grace to be better than the print version?

The mystery aspect to the story and the plot twists

Have you listened to any of Lillian Yves’s other performances? How does this one compare?

No, this is the first

I became very caught up in the story, and therefore eager to know what more was to come.

An enjoyable murder mystery set in the time of WWII, and so therefore full of spies and intrigue, and there's a bit of romance thrown in for good measure.
I liked the plot twists, and although I thought I had worked out the mystery it turned out that I hadn't fully.
The story is very good as a stand-alone novel, though there is scope for the characters and story to be continued which indeed it does as this is the first book in the series.
The narrator was also very good and very listenable!
Can highly recommend.