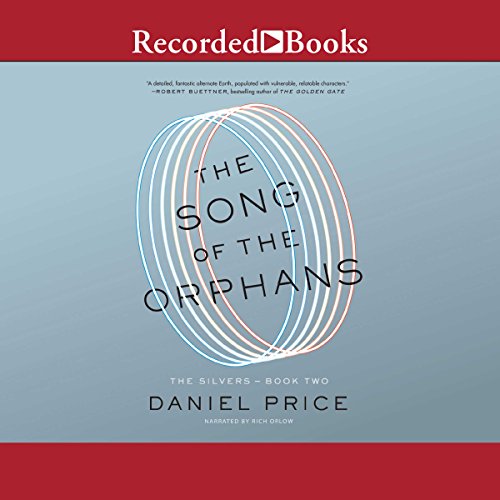 The Song of the Orphans

By: Daniel Price
Narrated by: Rich Orlow
Try for $0.00

The second book in the genre-bending Silvers series - an io9 "can't miss" science fiction pick - about six extraordinary people whose fates become intertwined on an Earth far different from our own.

After their world collapsed in a sheet of white light, everything and everyone was gone - except for Hannah and Amanda Given. Saved from destruction by three fearsome and powerful beings, the Given sisters found themselves on a strange new Earth where restaurants move through the air like flying saucers and the fabric of time is manipulated by common household appliances. There, they were joined by four other survivors - a sarcastic cartoonist, a shy teenage girl, a brilliant young Australian, and a troubled ex-prodigy. Hunted by enemies they never knew they had, and afflicted with temporal abilities they never wanted, the sisters and their companions began a cross-country journey to find the one man who could save them.

Now, only months after being pursued across the country by government forces and the Gothams - a renegade group with similar powers - the Silvers discover that their purpose on this unfamiliar Earth may be to prevent its complete annihilation. With continually shifting alliances and the future in jeopardy, the Silvers realize that their only hope for survival is to locate the other refugees - and determine whether they can be trusted or not.

What listeners say about The Song of the Orphans

I hope we don't have to wait 3 years for the next!

I stumbled on The Flight of the Silvers (first book in what appears to be a trilogy). It was one of the few books I gave 5 stars to that year—I listen to/read a couple hundred a year. In fact, I listened to it twice! So after a 3 year wait, I got The Song of the Orphans right away. I knew it wouldn’t be a 5 star (the second book never is) but I was hoping for 4. Alas, it’s 3 stars for me—I liked it.

It escaped 4 stars because unlike book 1, the balance between character development, battles, and time spent with the characters as they try to figure out what’s going on, trying to figure out their new powers, world building, etc. was too unbalanced.

In this book, there were plenty of new characters that Price could have developed, but he only does with one—and it still wasn’t enough. There were two characters in particular I really wanted more development of but it just wasn't there.

This book was way too heavy on the epic battle scenes. Sigh. I think one of them went on for over two hours, probably the longest action scene I’ve ever listened to. So I asked why, after the thousands of books I’ve read over the years does this book have such egregiously long action scenes? The fact that it took me some thought to figure it out lets me know that Price does it well, but I got bored during those scenes—even on 1.25 speed. So how does he do such long action scenes? Instead of a third person POV that’s in one person’s head (or just a few heads) he’s in more heads than I’ve ever read (except for other epic sci-fi like The Stand or Justin Cronin’s The Passage trilogy). So if he’s in fifteen different heads, it can be 15 times as long as if we just saw if from one person’s POV.

Still, I liked the book and look forward to the next!

As for the audio narrator: 4 stars for Orlow.

book one was somewhat difficult to get into, couldn't feel a base for quite a while. having said that, by the end of #1 i was definitely wanting more, so, onto book 2, Song of the Orphans. this was a super book, slowly began to see characters as real people, came to be able tho see into their hearts, even though they are fictitious.much better job bringing you into the story, rounding out the characters,as well as keeping me pretty surprised. i found myself getting anxious as danger would draw near...holy cow! this is definite worth the listsen, as many purchase was audible book.

Been waiting for this!!

I loved the first book. I love how different the "magic" system is, considering it's not really magic...

This book had a few sophomore slump sections, but overall, it moved the story along very well. The character development that engaged me in the first book, continued.

The biggest twist actually caught me off guard--because the author had me second guessing myself throughout.

I love these books, and I believe this one was well worth the wait.

I absolutely loved this series, I finished this book faster than any other books I've listened to. and the narrator was amazing

I didn’t want it to end. Now I’ll have to wait until the 3rd book comes out. I’m looking forward to it.
Also, the narrator is fantastic. He makes me forget that a male I’d doing the female voices.

I’ve read and listened to the first two books in this series multiple times. Can’t wait for the third.
These books would make the greatest tv miniseries!
Looking forward to finding out who they cast.

This storyline is one of the most interesting I've ever encountered...very different from most of what's out there in science fiction. This book was even better than the first one of the series!

The group of 'heroes' accomplish nothing. They concoct plans that fail, get saved by magic psychopaths, react moronically to challenges, get rescued from certain death by vicious, self-centered creeps, constantly misunderstand each other because they never explain what they mean and frustrate any desire one has to solve the mystery. I quit midway through book two.

I didn't want this book to end. Having read the first one, I was skeptical about listening to part two. But the narration was excellent, he brought all of the characters to life and I loved them even more. Gripping story brought to life by great narration.

Too much conflict for me. The story was a good idea, but I'm not into the chase and the fight.