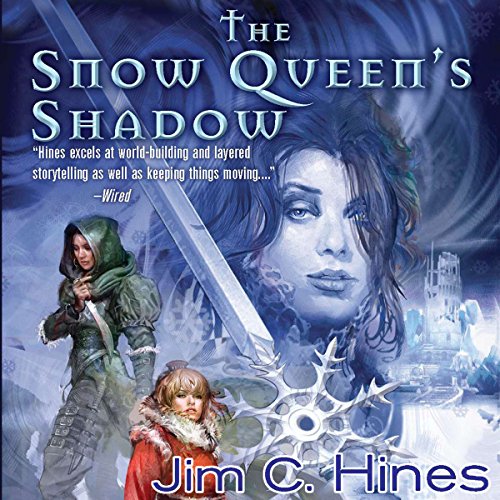 When a spell gone wrong shatters Snow White's enchanted mirror, a demon escapes into the world. The demon's magic distorts the vision of all it touches, showing them only ugliness and hate. It is a power that turns even friends and lovers into mortal foes; one that will threaten humans and fairies alike.

What listeners say about The Snow Queen’s Shadow

Jim Hines's Princess series is enjoyable light fantasy, the sort of thing that will appeal to fans of the early Xanth series (before Piers Anthony got really skeevy), but with more self-awareness. The first book was novel mostly for the premise: Cinderella, Snow White, and Sleeping Beauty turned into real, flesh-and-blood characters, not fairy tales but actual princesses with plausible backstories with just enough connection to the "fairy tale" version to make it understandable how the legends started.

The next two books were basically continuations of the adventure, adding the Little Mermaid and Red Riding Hood to the mythos.

In the fourth and last book in the series, there's little adaptation or subversion going on; it's just the final adventure of our three heroines, with some revelations about little details that have been running throughout the series (like just why is Danielle/Cinderella able to talk to animals?), and a resolution, of sorts, to the unfortunate Talia's crush on Snow.

Snow White, the flirty sorceress who's been the "fun" third of the trio for the past three books, becomes the Big Bad in this one, corrupted by a demon through the power of her mother's magic mirror. All of a sudden she's turning everyone evil, destroying armies, and toppling kingdoms. Danielle and Talia have to go after her, with the question hanging throughout the book being whether they'll be able to save Snow without killing her.

I won't say anything about the ending, other than that it was not unexpected, and I felt it was satisfying without being a cop-out.

There are a lot of magical battles, including battles of wits with faeries. While, as with previous books, it was rather AD&Dish at times, I think Hines made the action and the magic consistent enough for his setting without making me hear dice rolling in the background.

While this is the last book in the series (for now), there is certainly potential for Hines to continue the series in the future if he chooses to do so, and I would probably read them.

The Princess books wouldn't make my Best Fantasy list, but they're fine, enjoyable adventures with a surprisingly detailed amount of worldbuilding and character development. The Snow Queen's Shadow brings it to a bittersweet conclusion; I would definitely recommend reading the previous books first.

Imaginative twist on happy ever after

Mr. Hines has a wonderful sense of slightly twisted humor that gives us a what if look at the fairy tales. The story is captivating and the characters are very real. I love stories with a twist, and the author does not disappoint!