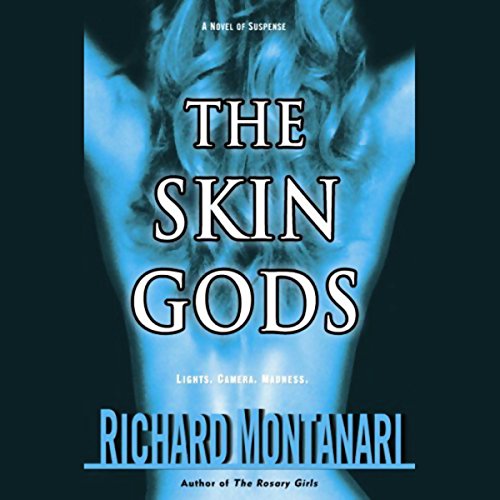 By: Richard Montanari
Narrated by: Scott Brick
Try for $0.00

It is the steaming heart of summer in the City of Brotherly Love. Back on the force after taking a bullet during the arrest of a sadistic murderer, Detective Kevin Byrne warily returns to police headquarters. He cannot shake the memory of the Rosary Killer's innocent victims or his growing sense that the evil has not been vanquished. And when he and his partner, Detective Jessica Balzano, are called in on a bizarre case, Byrne's gravest suspicions are confirmed.

A madman, dubbed The Actor by the homicide unit, is meticulously recreating Hollywood's most famous, and most gruesome, death scenes. The first murder is caught on film, spliced into a rented VHS edition of the Hitchcock black-and-white masterpiece Psycho. But in place of Janet Leigh is a real-life woman, and this time, the blood is red and the knife is real. Soon, more thrilling classics are turned into terrifying snuff films and placed on video store shelves for an unsuspecting public to find.

The key to this horrific puzzle could lie with any of The Skin Gods' supporting cast: the A-list Hollywood director; the ruthless executive assistant; the convicted mass murderer; or perhaps someone else who has made a sinister art of gruesome violence.

"A grisly, atmospheric thriller." (Publishers Weekly)
"The Skin Gods is perfect for anyone who enjoys a well-crafted thriller." (Booklist)

What listeners say about The Skin Gods

I really liked the story and Scott Brick is a stellar storyteller, but the editing seemed a bit off. The chapters were randomly repeated and even several sentences were repeated twice in a row. I thought maybe I had accidentally tapped on something and went back a few chapters but no, I double checked, everything is scrambled. Is there such a thing as a bad download?
I had a bit of trouble keeping track of the characters, there seemed to be too many. In spite of all that, I really enjoyed it.

Not produced right, skipping between chapters

Although a good story, it skips between chapters repeats several times. The book ends with two hours left. Starts over somewhere halfway..... Impossible to truly understand the storyline

In reading the reviews, I was hesitant to buy this book as I was afraid I would be disappointed, but I decided to buy this book for three reasons.
1.) I liked the characters from the first book and I just wanted to spend some time with them again.
2.) Living in and around the Philly area for my whole life, I love this city, and I really like how the author makes the city another character in this book.
3.) Most important! It is read by Scott Brick and his interpretation (at least for me)could turn the phone book into a thriller! :)

Anyway, the point of all this, is that I did enjoy it. The outcome is somewhat predictable if you listen to a lot of thrillers, but not totally.
I hate to admit this to all my fellow audible readers, because my "Sherlock Skills" are generally accurate, but I think, because I wasn't expecting too much, I fell right into the trap he laid! I couldn't believe he got me!

A serial killer and a disillusioned cop. This could have dropped into a predictable formula, but the author injects some complexity with a liberal sprinkling of red herrings. Perhaps the author tries a little too hard, as the storyline got a little confusing at times, and a few loose ends remained unresolved. Scott Brick does his usual first-class narrative. Not only would he turn a phone book into a thriller, but he'd make you rush out to buy the next edition!

This is the second book that I have listened to by this author and it will keep you guessing until the very end. The narrator is wonderful and the story draws you in. You will never want to turn it off.

This is much better

We reported this recording as needing some editing due to repeating sections of the book. We then received an email stating it had been corrected. This was mostly true. It still contains a couple of repeated sections but not entire chapters. This is great service.

As far as the story goes it is another masterpiece narrated by Scott Brick. Man can this guy perform or what?

This was really good, but the recording needs to be edited....severl chapters repeat and the several chapters are repeated after the epilogue.

While the story is compelling and enthralling the production of this audiobook has resulted in chapters that repeat and break the continuity of the story. Disappointed!

Where does The Skin Gods rank among all the audiobooks you’ve listened to so far?

I know he's a favorite among listeners, but Scott Brick is really NOT a favorite of mine. He tends (to me) to be a bit sing-song-ish and melodramatic, but within tolerance, as I keep listening to him. Dick Hill is one to whom I will not listen at all, so there's that. I also have a problem with producers/directors/readers who do not bother to find out the pronunciation of place names in the novels. Some copy clerk somewhere should be required to actually READ the book and write down all the names, then check with folks local to that area as to how they pronounce them. In this series, there is the Schuylkill River, pronounced Skoo-kul, emphasis on the first syllable. The river is referenced frequently, each time causing me to shout aloud the correction.

Again, this series and Mr. Brick are not the only offenders by a long shot, but given the frequency of occurrence and the minimal effort required to avoid it, it does seem unnecessary. Every time I edit a manuscript, I make sure to tell my authors to do their homework, make sure their facts about everything from construction to cattle ranching are correct. It seems to me, those producing audio books should do the same with regard to proper pronouncing of place names.

Read by Scott Brick, The Skin Gods is just over thirteen hours of listening. A crime drama, the evil doer re-creates murder scenes from dark movies, the first of several being the shower scene from Psycho - the old Alfred Hitchcock classic with a young Janet Leigh. He replaces the original scene with his snuff work and returns the VHS to the local video rental store (remember those?). Thus begins The Skin Gods.

Frankly, I had a bit of trouble with this novel, maybe it’s the horrific murder recreation. It’s pretty gruesome, ergo, I would squirm, then fast-forward a few times. The cops are desperate, the killer relentless. No character is the type-a macho dude or dude-ette to root for, neither a cop nor the bad guy. Just one frustrating situation after another. Not a bad story, by any means, but not my “cup ‘o tea”.

Scott Brick, as usual , is terrific. So, there’s that.