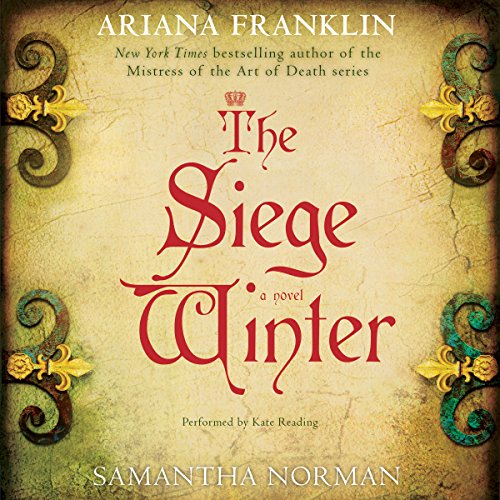 By: Ariana Franklin,Samantha Norman
Narrated by: Kate Reading
Try for $0.00

A powerful historical novel by the late Ariana Franklin and her daughter Samantha Norman, The Siege Winter is a tour de force mystery and murder, adventure and intrigue, a battle for a crown, told by two courageous young women whose fates are intertwined in 12th century England's devastating civil war.

1141. England is engulfed in war as King Stephen and his cousin, the Empress Matilda, vie for the crown. In this dangerous world, not even Emma, an 11-year-old peasant, is safe. A depraved monk obsessed with redheads kidnaps the ginger-haired girl from her village and leaves her for dead. When an archer for hire named Gwyl finds her, she has no memory of her previous life. Unable to abandon her, Gwyl takes the girl with him, dressing her as a boy, giving her a new name - Penda - and teaching her to use a bow. But Gwyn knows that the man who hurt Penda roams free, and that a scrap of evidence she possesses could be very valuable.

Gwyl and Penda make their way to Kenilworth, a small but strategically important fortress that belongs to 15-year-old Maud. Newly wedded to a boorish and much older husband after her father's death, the fierce and determined young chatelaine tempts fate and Stephen's murderous wrath when she gives shelter to the empress.

Aided by a garrison of mercenaries, including Gwyl and his odd red-headed apprentice, Maud will stave off Stephen's siege for a long, brutal winter that will bring a host of visitors to Kenilworth - kings, soldiers... and a sinister monk with deadly business to finish.

What listeners say about The Siege Winter

Above average writing especially considering Norman finished Franklin's work after Franklin died. Historical relevance, character development, and plot are nicely balanced. Kate Reading delivers the story and characters with a clear, strong voice. The subject might not appeal to everyone, but the book should be on the list of any reader who enjoys historical fiction set in the Middle Ages.

I thought I'd read all of A F books & grieved to have lost such talent. I don't know how much her daughter contributed to this book, but as soon as I finish writing this review, I'm going to do a search to find out if she has written any other books!

Please give us more books!

If you could sum up The Siege Winter in three words, what would they be?

I didn't want it to end. It was an emotional roller coaster. I loved the female characters - strong, but vulnerable. I loved the humor of the book. The book brought the period of 12th century history to life, the complete and total chaos of a country ruled by anarchy - absence of law. Please give us more books!

Gwill was my favorite character. He was solid, competent and loyal, a real old-fashioned hero. But I loved the humor of Maude. Pender's character created the emotional distress of the book, a little girl, who had endured a horror, that tied the entire book together. As a real-life mother of a girl, it was the worst nightmare of a parent. Her character created the strong physical reaction to the book.

What does Kate Reading bring to the story that you wouldn’t experience if you just read the book?

The reader was fabulous. Excellent accents. Excellent oral interpretation. Will search for more books read by this author.

I had a physical reaction to the book. It upset my stomach, tightened my chest and interfered with my sleep - an emotional roller coaster.

Damn her for dying! Ariana Franklin has become not just my favorite historical fiction author but my favorite author ever.

The book? Wonderful historical fiction that makes you feel like you are there. Brilliant characters, all complex and compelling. Her villains are always very disturbing and vile. The first person narrative moves around so you get both outside and inside perspectives, s technique I loved. This brilliant book is matched by the perfect narration by Kate Reading - simply amazing.

Enjoy! And then go listen to all her other books - they are all equally great.

Fits perfectly with Mistress in the Art of Death

This book is written by the daughter of Ariana Franklin, one of my very favorite authors. Samantha Norman captured her mother's voice perfectly, and I didn't want to stop listening to this book. (I was also very happy to find out that Norman is going to continue writing her mother's series, "Mistress in the Art of Death." I very much want to know how that storyline turns out!) As a stand-alone book, "The Siege Winter" doesn't require any familiarity with the "Mistress in the Art of Death" series, but it confronts some of the same societal issues—in particular class and gender equality—in the context of a richly constructed historical narrative.

This is a very absorbing story and well written.

i hope we see more historical novels from this talented author.. I really love the character's and the back story is gripping. not to mention the. interesting historical. period backdrop.

Great story though slow going. If you followed her other books, Grave Goods among them, you know she favors strong women, and this is no exception. But the writing is vastly different. I recommend this book to anyone who loves historical novels with strong female characters.

Fine historical mystery, so so narration.

I enjoyed the story tremendously despite a narrator who constantly ended sentences on an upturned intonation. I found that consistently annoying throughout the story. However the well developed and complex cast of 11th century characters and intriguing fast paced mystery overcame the sometimes monotonous narration. A good overview of the war between Matilda and Stephen emerges as the story progresses. It all feels well researched historically and culturally. Very satisfying in that regard as well.

I read a lot of "historical" fiction. Most in Britain or Scotland, and often in the same time period, 12th Century. The wars between Kung Steven and Empress Matilda are frequently aback drop of Hesse books. This is different because the story is being recorded as it is told by a dying Abbott. He doesn't tell the story from his view but from that if a young girl he had known.

I enjoyed learning more about the ole of cross bows and archers.I also enjoyed the inside look at a feudal castle and a siege. Very enjoyable. I wish it were a series.

Escape fiction at its best

Really enjoyed everything about this, nice story line, good and unusual setting, and great performance by the reader.