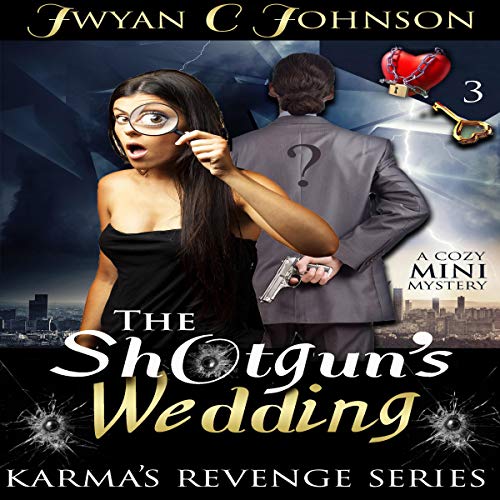 The Shotgun's Wedding: A Cozy Mini-Mystery

The Shotgun's Wedding: A Cozy Mini-Mystery

It's a very different shotgun wedding as a future in-law is murdered the night before the wedding. And son-in-law is arrested before flying away to the honeymoon destination. The town suspects his bachelor party, which he never attended, was a planned alibi.

Gun smoke fills the air with a runaway bride, a clever psychologist, dangerous shenanigans, and another in-law...in law. It's a cozy mini-mystery rematch with Detective Dedra Kare. But will she still Remember to Forget, after being Punished By Silence? And can the Clue Queen both chase down the truth and win an extra bet before the smoke clears from The Shotgun's Wedding?

This audiobook functions both within the series and as a stand-alone mystery.

"Stress changes the truth for itself. Peace changes itself for the truth" (Jwyan C. Johnson)

I give this book a solid 3.5 stars. It’s kinda difficult for me to rate it. I did enjoy it but I didn’t enjoy the narration that much and the ending wasn’t that shocking. Interesting story still.

Unique plot, the characters were funny, and with the good narration it brought this story to life. A good mystery in that it was at the end to figure out who. Given ARC for my voluntary review and my honest opinion

OMG is there a twist!

The thing I like best about mysteries is trying to figure out who did it as the story goes along. After thinking I knew the answer and just humoring myself by finishing the book, boy was I wrong. The end blew me away on a scale of 1 to 10 and10 being the biggesttwist I would give it a 12. They had some very humorous parts in the book that I really enjoyed. I and although I thought the narrator’s talents would’ve been better served on a different book I must say she got the job done. The male voices were not that great but after a while you get used to it. She has a lovely voice I just think she would do better on a female-based book or cartoon shows. All in all I do like the book and that is why I gave it five stars out of fiveenjoyed the writing the story line

Love the characters and storyline. Lots of action, my favorite. Enjoyed this audiobook from beginning to end. Looking forward to more stories from Johnson.

This was so entertaining I could not put it down until I was done. The characters were great, funny and unique, as was the story. It was the right length and well-edited. I've always really enjoyed these writers stories, but I wish I could give this one more star. It was sooo nice to read a truly strong female lead character. Can't wait to listen to his next audiobook.

Different storyline. Great and fast listen. Jwyan has done it again. The heroine with a bad boy sidekick. Wonderful choice.

Wonderful, well-rounded story. Characters almost seem alive and people you would like to hang out with for a night of fun. Have listen other stories by author and this audiobook is as enjoyable as the others. Cannot wait for the next story by this author.

Absolutely great listen. I know i'll listen to this audiobook over and over again. Keep them coming Jwyan C. Johnson. Much the action and suspense. Would definitely recommend😊