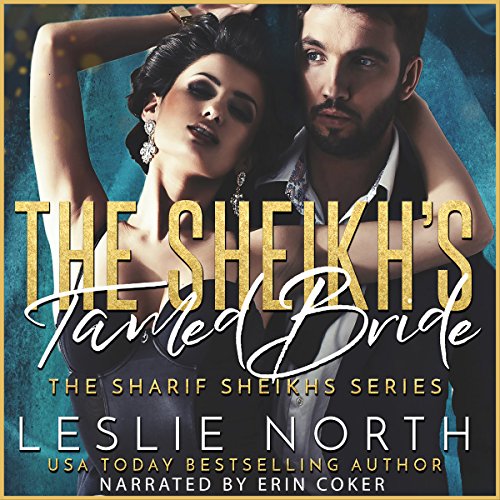 By: Leslie North
Narrated by: Erin Coker
Try for $0.00

Rashid Sharif has never apologized for his wild lifestyle, but after one scandal too many, his family is fed up with his playboy ways. He’ll agree to his brother’s outrageous demand that he marry, but it won’t be to some wallflower as his conservative family would prefer. If he’s going through with this farce, there’s only one woman he’ll take as his wife - his sister-in-law’s American friend Mila. She’s a rebellious little thing, with fiery passion simmering beneath her icy exterior. Although Mila’s never been more than coldly polite to him, Rashid will do what it takes to win her over.

Mila’s always been a wild child, but when she chose to follow her dreams to Dubai, it wasn’t to work as a glorified waitress. She needs a chance to get ahead, but when that opportunity comes, it’s not a job she’s offered - it’s a marriage. Rashid Sharif is ridiculously handsome, richer than sin…and a complete player. Mila wants nothing to do with the womanizer, even when he offers her more money than she could make in a lifetime. But when the notorious bad boy begins to play nice, Mila finds it hard to resist temptation.

As Rashid works to woo Mila, a simple seduction suddenly seems like something more. But can she ever trust the sinful sheikh, or will Mila always worry that Rashid is only playing games with her heart?

What listeners say about The Sheikh’s Tamed Bride

I love Sheikh's stories by Leslie North. This is the second book in the Sharif Sheikhs Series. Rashid has to get married and he offers Mila, Liyah's American best friend, a marriage of convenience. I love the two main characters and also the secondary characters. This is a sweet love story with some steamy scenes and, after a little twist, they got their beautiful HEA. The narration is well done and easy to listen. I can't wait for the next book in this series. I received this free review copy audiobook at my request and I have voluntarily left this review.

...a powder keg of grit, lust and heart.

When fighting for something important, rules don't apply. Mila and Rashid are in for the fight of their lives. After a lifetime of struggle Mila needs a chance to get ahead. Rashid wants a chance at earning his family's respect. Born to be wild, it's that rebellious spirit that can make or break any chance they have to be happy. From fighters to lovers and survivors, the battle is on for an exotic and intoxicating showdown. The Sheikh's Tamed Bride is a powder keg of grit, lust and heart.

A wonderful second book in this series. Leslie North knows how to write a hot book with an engaging storyline.

Erin Coker has a soft smooth sexy voice. A major plus for this series.

I received a copy of this audible free at my request and am happy to provide my review.

Rasheed working to prove he is responsible as second brother. Mila has come to Dubai to change her life. A marriage of convenience becomes more..one knows only money and things and one wants emotion and expressions of romance.
The challenge of a different culture, responsibility and personalities becomes more than can be expected.
Love changes an hardened personality and one learns their own worth.
Suspense, sexy scenes and emotions explored in a story that draws the reader/listener in.
The narrator did a wonderful job with the male and female voices..fantastic middle eastern accent. Great job!

Can he tame her?

Each story Leslie North writes has it's own personality, and I love that about her books. I know going in, it will be a pleasure to listen to. Sheikh Rashid is a rebel, and when he is told he has to get married, he chooses a woman that he knows will make everyone angry, his sister-in-law's best friend Mila. Mila is a force to be reckoned with, and she won't stand down to anyone. Will he be able to tame he spirit? Will he want to? What each does not expect is the attraction that is between them. With beautiful visuals of Dubai, a snooty family and a lot of spunk, this story is full of fun and surprises. Give a few cameos from Liyah and Asad, this book weaves together with book one, but can be listened to as a stand alone and will give you the warm feeling of how love can grow.

Performing accents is not an easy task, and Erin Coker nails each one, both with male and female voices. She also gives Mila spunkiness with a touch of vulnerability. She gives a wonderful performance.

I loved how this was the "Marry Me, I need you to make me look good and I'll pay you" kind of story...I know that might sound insulting but I love these kinds of stories... I love the fact that Mila is one of those girl's who doesn't take any hock from anybody and then comes along Rashid and it's the exact same. Of course he is not used to this type of woman so I guess this is a complete change for him...I love the fact that he is this playboy who thinks he is just hot fudge to everyone and can use his good looks to get what he wants but he really does find himself falling for Mila and I love it....The one thing that does get on my nerves with these kind of books is that when something happens that affects their relationship, the main leading lady of the story tells the truth when a lie is told (or sometimes leading man) and the Leading male (or female) doesn't want to believe because of so many bad experiences. And OMG...Way to quick to forgive...make them sweat a little...Other then that a definite good read.

Wonderful romance novel about shiekh's and regular woman loving their men with all the love in their heart.

This story is perfect for its characters or is it the other way around. I could see something like this happening. from the illegal betting to the family dinner. I hope Amera also gets a story.

Not what they were expecting

Mila isn't what Rashid is expecting and Rashid isn't what Mila expects, but that is what makes this story so sweet. I love how they both are so different than what they appear to be and that they are happy with themselves as they are for the most part. This is a great sweet story and I loved the sparks that fly. Erin did a great job narrating and reproducing these two with her voice.

Short, sweet and sexy romance that is well-written and perfect narration! Highly recommend!