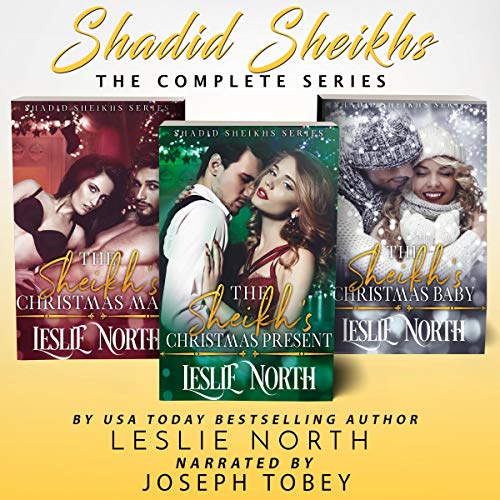 The Shadid Sheikhs: The Complete Series

By: Leslie North
Narrated by: Joseph Tobey
Try for $0.00

Three books in one volume!

The snow is falling, the fires are blazing, and Poppy Milenne is hard at work. While the housemaid preps for a wealthy guest, she’s hardly expecting someone young and handsome. Imagine her surprise when the man who comes to spend the Christmas holiday is the charismatic Sheikh Shadid. The playboy prince arouses Poppy’s thirst for adventure, but giving in to temptation would mean risking her job...and her heart....

Sheikh Samir Shadid can’t stand spending the holidays alone. Christmas reminds him of a time he’d like to forget, and what better way to do so than with a willing woman. His father may have sent him away for safety, but that doesn’t mean he can’t enjoy himself while he’s here. When the beautiful American maid catches his eye, Samir is determined to seduce her in time for Christmas.

Samir is looking for a holiday fling, but Poppy soon gets under his skin. And the more time she spends with him, the harder he is to resist. While the weather may be cold outside, inside ‘tis the season for love.

The Christmas season is a time for giving, and pilot Maria Walken has a planeload of gifts she’s gathering for Syrian refugees. Her charity has gotten a bad rap, and this time she’s determined to get her cargo delivered in time for the holiday. When a businessman shows up in need of a lift, she can’t stand his display of wealth…or the way he takes her breath away. But when he offers a large donation to her charity, Maria can hardly refuse.

Sheikh Jarik Shadid is trying to make it to Lebanon to testify against a former friend. With his need for discretion and few options to choose from, he’s more than willing to contribute to Maria’s charity in exchange for a seat on her cargo plane. But as a freak snowstorm blows in extending their travel plans, Jarik’s sensible exterior is starting to crack under the beautiful weight of the principled pilot.

Maria always promised herself she’d never fall for a rich man, but as they work to spread holiday cheer, she’s beginning to wonder if Jarik is everything she’s ever wanted for Christmas.

Their passionate affair ended in heartbreak when he left without warning. When he returns unexpectedly, can their heat melt away the hurt of the past?

Kashif Shadid has always craved adventure. With one last chance to win the Iditarod dog sled race before assuming his role as Sheikh, he’s returned to the Alaskan wilderness to train at a legendary sled dog farm. But returning means coming face to face with Kristy Cohen, the woman who captured his attention years ago. He’s thrilled once again by her icy beauty, but her farm is facing financial ruin. Kashif’s eager to take control. However, getting her to agree with his plans may be a challenge.

What listeners say about The Shadid Sheikhs: The Complete Series