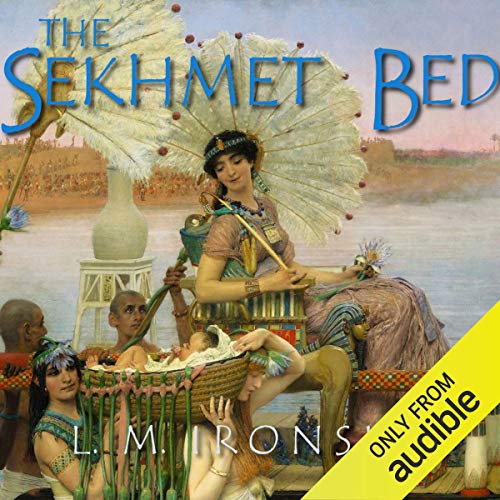 Is Ahmose's divine gift a blessing or a curse?

The second daughter of the Pharaoh, Ahmose has always dreamed of a quiet life as a priestess, serving Egypt's gods, ministering to the people of the Two Lands. But when the Pharaoh dies without an heir, she is given instead as Great Royal Wife to the new king - a soldier of common birth. For Ahmose is god-chosen, gifted with the ability to read dreams, and it is her connection to the gods which ensures the new Pharaoh his right to rule.

Ahmose's elder sister Mutnofret has been raised to expect the privileged station of Great Royal Wife; her rage at being displaced cannot be soothed. As Ahmose fights the currents of Egypt's politics and Mutnofret's vengeful anger, her youth and inexperience carry her beyond her depth and into the realm of sacrilege.

To right her wrongs and save Egypt from the gods' wrath, Ahmose must face her most visceral fear: bearing an heir. But the gods of Egypt are exacting, and even her sacrifice may not be enough to restore the Two Lands to safety.

What listeners say about The Sekhmet Bed

Never listened to a story about Egypt before...

What made the experience of listening to The Sekhmet Bed the most enjoyable?

The narration was really enjoyable. I have never listened or read a story about ancient Egypt before and the way the story was told pulled me in and I didn't want to stop listening!

I really loved the all the small details and descriptions of the characters day to day lives but it was the dramatic twists in the book that made it a "page-turner". All of the Characters were very well developed and it had me on edge wondering what was going to happen next. I loved the whole thing from start to finish!

Have you listened to any of Amanda C. Miller’s other performances before? How does this one compare?

I haven't before, but will in the future!

If you could rename The Sekhmet Bed, what would you call it?

I think the name suits the book well, I wouldn't change it.

I am really hoping that the other books in this series comes to audiobook soon!

Entertaining book. Writing somewhat juvenile. Would not have chosen this narrator. Didn't fit the story.

What made the experience of listening to The Sekhmet Bed the most enjoyable?

The narration and the storytelling were both so beautiful

What other book might you compare The Sekhmet Bed to and why?

I haven't read much about Ancient Egypt in historical fiction, so I don't know.

Which character – as performed by Amanda C. Miller – was your favorite?

The narration was the best. I wasn't a huge fan of the character voices.

Yes, and I almost did. I finished it less than 24 hours after purchasing.

I found the traditions of the ancient Egyptians in this story extremely fascinating. Did take me a while to really get in to the scheme of things, but once I did I was happy I'd discovered Libbie Hawker's series. The narration was not very imaginative, at least in the beginning, but once I played with the speed settings, I adjusted to Miller's narrative. She did amp up the excitement towards latter portions of audio and it helped me visualize an empire ruled by Pharaohs, sisters fighting for control of a kingdom, gods and godesses appearing in visions, heirs born to rule. I will be continuing on to the second book in the series, THE CROOK AND FLAIL. Haven't decided which format to choose. I have the Kindle version. Maybe I'll read it instead and use the imaginative voices in my head to create the characters.

An intelligent, well written , informed historical fiction piece. I enjoyed being a part of this characters life and feeling the richness of detail in this epic land. Weaving history, myth, religion and culture together inextricably was done with great skill.

Great book - really get a feel for ancient egypt

Would you consider the audio edition of The Sekhmet Bed to be better than the print version?

I didn't read the printer version so I can't be sure.

It really makes you feel like you're in ancient Egypt.

Have you listened to any of Amanda C. Miller’s other performances before? How does this one compare?

No, this is my first, but the narrator did a great job.

Who was the most memorable character of The Sekhmet Bed and why?

Ahmose, she had the most 'screen-time'.

My only complaint was that I feel like it had a slight leaning towards a female perspective. There was more focus on motherhood and the protagonist's rival sister that I (a male reader) was especially interested in. However that did not detract enough from the book to result in my dissatisfaction of the whole.I love historical fiction, I've read most of the work by Conn Iggulden and James Clavell, as well as some by Bernard Cornwell, Robert Fabbri, Jane Auel and Ken Follett. I am not educated in Egyptian history, so I cannot judge the actual accuracy of Ironside's details (though they all seem legit as far as I can tell). However I can say she did as good a job of making the reader truly experience the historical setting as any of the those authors did. The story itself was also great, and the writing itself was too.

This was a wonderful book! I’m so happy it’s part of a series so I can keep following this excellent and well written tale of the incomparable Hatshepsut, fifth pharaoh of the eighteenth dynasty Egypt!

3rd time I've listened to the series. Narrator portrays the characters well with out over doing it.

Valley Girl of the Kings

The narrator spoke with a downward lilt that turned every sentence into a sardonic, sarcastic statement. The presentation was so annoying that this was the first time I ever listened to a book imagining it as a written page in order to determine which was worse, the writing or the delivery. I highly recommend reading this rather than listening to Ms Miller. While the main character was not much of a sympathetic character, the reading made her even less likable.

This book was well thought out, and well written!!! Then to top it all off it was FLAWLESSLY performed!!!! I highly recommend this book!! But as a 90's kid I will say this "You don't have to take my word for it!"

I loved this novel. Great depiction of the beliefs and trials of the Egyptian Royal Family. Compelling story all the way through.

ive listened/read it multiple times. it keeps me entertained even when i know whats coming. the descriptions are vivid enough to be able to visualise the scenery but not so detailed you get bored. the characters are living and believable. i highly recommend.