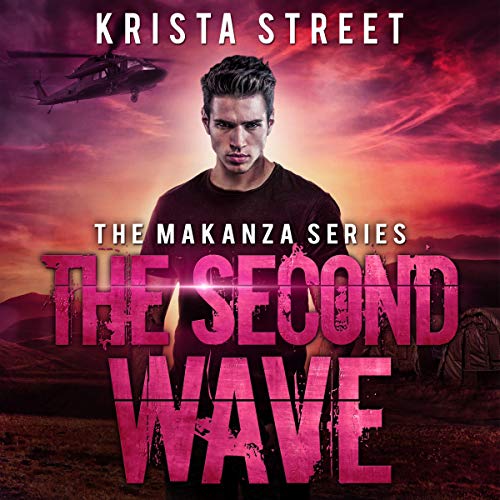 By: Krista Street
Narrated by: Zachary Johnson
Try for $0.00

He thought the danger was past, but it was only the beginning....

Two years ago, the Makanza virus was eradicated from the public. Now, everyone thinks they’re safe - including Davin. As the oldest among his siblings, Davin plans to leave for college after a short visit with his divorced father on the Cheyenne River Reservation.

But then the Makanza sirens go off, and everything changes.

The warning alarm splits the soft April skies over the vast South Dakota prairie. Against all odds, the virus has returned, and the outbreak is only a few miles from his father’s ramshackle home.

Davin can only watch, helpless, as his family succumbs to the virus, and when coughs rattle his chest, he fears death is inevitable.

But a different fate awaits Davin. As his body fights the virus, it isn’t dying. It’s becoming something different. Something that will leave him with strange new powers...and make him a hunted man.

The Second Wave is the first installment in a complete series where fantastical powers collide with modern science. Dive into this imaginative and romantic series today!

What listeners say about The Second Wave

This story shattered my heart for Davin and his family. The telling of how he and his family came to contract the virus is heartbreaking. The things he went through as an 18 year old were horrendous. The author's writing brings the story to life and places you right in the middle of the world she's created. The narrator does an amazing job of bringing Davin to life.

Victoria's Review of The Second Wave.

An awesome start to an awesome series that I Can't wait to read and hear on audible. this is a refreshing and exciting new Author and production team that I can't wait to follow. Thank you for the opportunity.

This was such an explosive book. I was rooting for Davin and his family the whole time.
Zack did such a great job narrating the story that i cried multiple times when big things happened.
You will love the story of Davin

This is a heartbreaking tale about a family torn apart for a virus ravishing the country. Davin, 18, and his 4 younger siblings were visiting their dad when it happened. Follow along Davin’s story as he has to take make difficult decisions to maintain and care for his family to try and survive. The narrator did a good job also.

This was an interesting start to the series. It shows a lot of promise. I just wish the other characters were shown in more depth, but since the book wasn't that long, hopefully the next two will flesh everyone out. :)

Krista does a great job of getting us to care about what happens in this book even though I already knew from reading the other books. It was great though to see how it unfolds as well as better understanding Davin's anger and resentment for anyone associated with the government. I couldn't help but feel some fear as I could easily see this happening to our own country. I felt for all of the family and found myself tearing up in parts. I can't wait to read more from Krista and hope she writes more about the other Kazzies.

I also received the audible version for free and leaving my honest review of the narration. While I loved the book I found the narrator a little harsh and gruff which impacted my enjoyment. I enjoyed the book a lot more than the audible because of that.

The Second Wave: The Makanza Series, Book Zero by Krista Street was a great read. Two years previous the Makanza virus seemed to be eradicated from the public and they think that their safe. That is until the sirens sound while Davin and his younger siblings are visiting his dad at the Cheyenne River Reservation. The virus has returned and the outbreak seems to be close to their dad's house. Davin had to see all of his family succub to the virus, when he gets a cough. He knows that he will die to the virus, but his body fights it and he gains strange new powers.I enjoyed reading this first installment in The Makanza series.

Wow this is a fantastic listen if you love a fast paced heart pounding listen, that gets the adrenaline pumping this is definitely that. Davin is wanting to go to college but everything changes. The Narrator does a fantastic job. and the Author has done an amazing job bringing this story to fruition. I definitely recommend this audiobook. I felt like I was right there with the characters going through all the twists and turns.
Shauna Joesten

Omg this novella was heart wrenching! I did not read book one before this so I had no reference as to how this story would play out. That being said I was on edge the entire book and in tears for the last half. Honey Moley it was intense. The narrator did a wonderful job portraying the emotions and differentiations between characters.

I really enjoyed listening to this book. It is about Davin and his siblings visiting their father when a virus outbreaks. This is the second wave of this virus. by the end of the book Davin's entire family has caught the virus. But but some miracle Davin changes and survives the virus. The government takes him to Compound 26. Can't wait to see what happens next. If you enjoy Dystopian type books I highly recommend this book.

Great insight into how it all began

I had read the Makanza series and loved them. Krista has don’t a great job filling in the blanks in this. A must listen to either before or after the rest of the series.

What an emotional story!

I have already read this book and I was offered a free code by the author for an honest review. These opinions are my own.
I wasn't sure about Zachary's voice to begin with as he sounded older than I imagined Davin to sound.. However the emotion he put in his narration was brilliant and I actually cried at several times throughout the book,
Makanza has already plagued the earth once. Davin and his brothers Lars and Elliott and his sisters Aurora and Mina are at at the reservation visiting their dad when the second outbreak begins.
This book is a prequel to Compound 26 and it gives you an insight to what Davin goes through with his family. A heartbreaking story by brilliant.

This is a magnificent new series! This storyline had my emotions all over the place. I felt so much from the story. This is an extremely heart wrenching story. It’s so good that it a definite must listen.
The narrator does a great job with the characters and voices of each. It took me a little while to get used to his voice but after the first few chapters, I couldn’t stop listening.