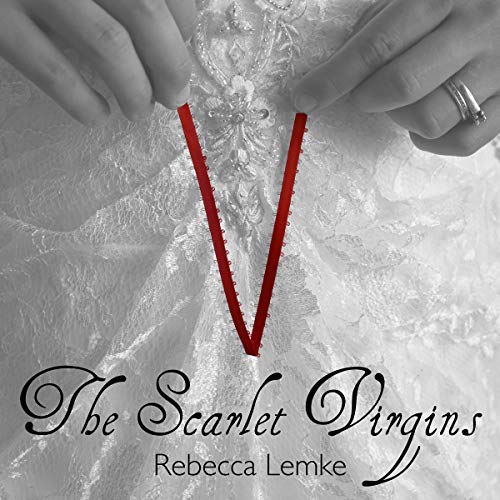 By: Rebecca Lemke
Narrated by: Thomas J. Lemke
Try for $0.00

The youth of my generation know these phrases by heart.

These were the labels placed on you if you didn't follow the rules.

The rules were these:

They wanted to safeguard our sexuality. Instead, they broke it.

They wanted us to be spotless before God. Instead, they drove us away from him.

The Scarlet Virgins is a memoir of one woman's journey through the Christian Purity Movement. It wrestles with the experiences and temptations of her and her peers, including the temptation of apostasy, addiction, alcoholism, anorexia, depression, self-harm, and suicide. The author seeks to restore the truth to broken souls: It is Christ who makes us pure.

What listeners say about The Scarlet Virgins: When Sex Replaces Salvation

We may not agree on everything but...

This book is an excellent look at a type of religious extremism from the inside. The author sees that there are inconsistencies in what she had been taught and takes a step back to examine, question and rebuild her faith. Listen to how she went from blind faith to an educated, thoughtful choice of faith. I can't say I completely agree with some of her conclusions or assertions but I can respect that she used her intelligence to her right path.

This starts off sounding like it's going to be one long extreme-right indictment of the sexual revolution, but please hang with it. It does turn around after several chapters. It is still told from a very traditional Christian viewpoint, but it does a good job of illustrating the unhealthier parts of certain sects' beliefs and explaining all the ways those beliefs can backfire and cause harm. I disagree with a lot of what was said regarding modern views on sexuality, but I also think it's important to hear the "other side" out and understand their viewpoints. My only complaint is that the description would lead one to believe that the story revolves around the sexual assault and the community's horrible reaction to it, but it doesn't. That event is really just touched on about halfway through the book and not really fully explored before the book moves on to other things. Do not expect this to be a secular look at certain Christians' attitudes on sexuality; rather it is one woman's description of her spiritual journey and how her upbringing had lasting effects on how she and her friends lived their lives. It really feels as if it's written by a Christian for other Christians.

I was given this book for free and have voluntarily left this honest review.

Definitely meant for people of faith

When chosing this book I hadn't realized it was written for other Christians in mind. Being someone not of any faith myself, I found some of it eye-rolling, but figuring I wasnt the intended audience I didn't factor it into my review. For the review I asked myself, did the author have a point to make, and how well was it made? On that scale, i feel the author was fairly sucessful.

Two major qualms I had with the book. First, the choice of narrator was odd to me. Not to say the narrator did a bad job - quite the opposite, he did rather well - but I felt it odd to chose a male narrator to voice the biography of a female author. Second, while the author deftly describes the problems and flaws of purity culture, I felt that the end where she describes switching from a life of abstinence to married life was glossed over a bit. It wasnt the point of the book, but it still felt like there was one more chapter that we didn't get to read. As I say, it wasnt the point of the book, so I didnt rate it too harshly because of it.

Overall, this book has a strong statement to say about purity culture and was told rather well, but it is a book about Christians for Christians.

I think this is a good book for those who struggle with intimacy as a result of spiritual teachings. It's message is definitely geared towards a particular audience. If you have been affected by the"Purist" teachings this book will most definitely help shed some light on your struggles.

First, let me say this author is brave to speak out about her pain, and while she didn’t divulge too much detail about the abuse she and her fellow purity survivors suffered, it appears to have left a scar on her heart. While I don’t agree with some of what she says, namely I don’t believe sex outside of marriage is a sin, and while I think that abstinence among youth should be practiced, mostly for the reasons I’ve represented in my own book, Twisted Faith, I do not believe that sex between two, mature, consenting adults is wrong. I do believe that casual sex should be avoided, even among adults. Some may consider me a heretic, but I also don’t believe same-sex partnership is wrong. after all, we are created by God and if God thought it was wrong, why did He make them that way? I know many same-sex couples who are better marriage partners than heterosexual partners.
While I consider myself a strong Christian and try to live my life and parent my children and grandchildren in the ways God would want us to live our lives—clean, honest, and helping others, I do not believe the Bible is completely infallible. And the reason I believe this is that the Bible is written by human hands with tales handed down generations. As with any story told years after its occurrence, facts and events tend to get twisted. Simply put, humans are subject to err. Otherwise we would call ourselves perfect, which we are not. I do believe the Bible should be used as a strong guide to history and to what God wants from us.
My father was a kind man and would give someone the shirt off his back if they needed it. However, he was also an alcoholic and would get belligerent and angry when he’d consumed too much alcohol. He never spoke to us about church or God and, to the best of my knowledge, never stepped a foot inside a church except at the marriages of my two sisters. Despite this, when he passed, and I had difficulty accepting his death, God allowed my father to cross the spiritual realm and hug me goodbye. Others might consider him a sinner, but I considered him a man to look up to. He taught us to be honest, look out for others, and be moral people. I know that despite all his sins, he has found a place in heaven with Jesus.
What all that said, I have not let these differing opinions influence my review. I’m rating this with four stars because the author has put a lot of thought into what she believes. The book is well-written, the context flows well, and her thoughts are clear. Even though I do not completely agree with what she says, she is steady in referencing the source of her belief. At the end of the book she has listed reference materials that sound interesting. I’ve written them down and plan to check them out further.
The book is narrated by the author’s husband, who does a great job. His voice is strong and clear and he reads with confidence. The only problem I had with the narration is that most of the story is told in first person. In a few portions of the book, having a male narrate as a female voice in a non-fiction story got confusing, and I had to remind myself this was a female’s story. **I was provided a free copy of this audio book for review purposes, which in no way influenced my opinion.

I didn't not enjoy this

It's okay to have your own beliefs but i think you do people and yourself a disservice. When you don't back them up with reasonable logic.