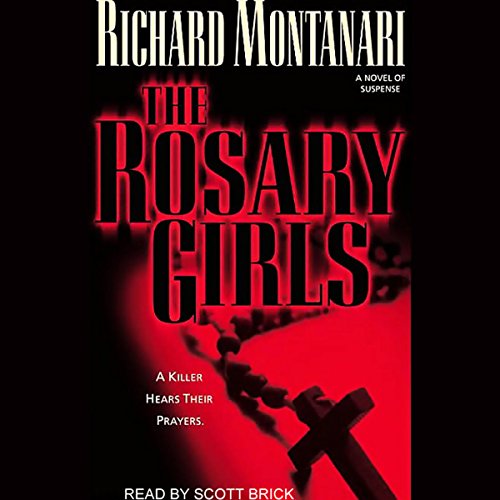 By: Richard Montanari
Narrated by: Scott Brick
Try for $0.00

In his sleek, visceral novels Deviant Way, Kiss of Evil, and The Violet Hour, Richard Montanari slammed into the suspense field like a force of nature. Now, Montanari has written an astounding novel that pits two besieged detectives against a fiercely intelligent serial killer.

Sprawling beneath the statue of William Penn, Philadelphia is a city of downtrodden crack houses and upscale brownstones. Somewhere in this concrete crazy quilt, one Catholic teenage girl is writing in her diary, another is pouring her heart out to a friend, and yet another is praying. And somewhere in this city is a man who wants these young women to make his macabre fantasy become reality. In a passion play of his own, he will take the girls - and a whole city - over the edge.

Kevin Byrne is a veteran cop who already knows that edge: He’s been living on it far too long. His marriage failing, his former partner wasting away in a hospital, and his heart lost to mad fury, Byrne loves to take risks and is breaking every rule in the book. And now, he has been given a rookie partner. Jessica Balzano, the daughter of a famous Philly cop, doesn’t want Byrne’s help. But they will need each other desperately, since they’ve just caught the case of a lifetime: Someone is killing devout young women, bolting their hands together in prayer, and committing an abomination upon their otherwise perfect bodies.

Byrne and Balzano spearhead the hunt for the serial killer, who leads them on a methodically planned journey. Suspects appear before them like bad dreams - and vanish just as quickly. And while Byrne’s sins begin to catch up with him and Balzano tries to solve the blood-splattered puzzle, the body count rises. Meanwhile, the calendar is approaching Easter and the day of the resurrection. When the last rosary is counted, a madman’s methods will be revealed, and the final crime will be the one that hurts the most.

Relentlessly paced and vividly told, The Rosary Girls is a smart, emotionally complex, fiercely gripping thriller from an author who takes chances, breaks new ground, and leaves listeners haunted and moved long after the last moment.

"The Rosary Girls is a well-written, fast-moving thriller with twists and turns galore that will keep you guessing until the end." (Phillip Margolin)
"A relentlessly suspenseful, soul-chilling thriller that hooks you instantly." (Tess Gerritsen)

What listeners say about The Rosary Girls

This is perhaps my favorite audiobook so far. It has a complex plot, likeable characters, and offers great insight into the mind of a serial killer. The last two hours are unequaled in suspense. It's been a long time since I've been frightened by a book; this one does the job in aces. Also, once again, Scott Brick rules! It's as if he is living the book as he reads it. The Rosary Girls couldn't be better.

Richard Montanari has a talent for exceptional character developement. His writing flows like poetry. Although the plot is not unique... "Cops look for weirdo", I could not stop listening till the very end because of the extremely well written story. The reader adds to excellent entertainment by brilliantly "acting" the story rather than just reading it. If you like insite into characters as well as good prose, don't miss this one.

I am now on book #4 in this series, and I tend to be stingy with stars. First off, let's take care of the category. Some reviewers cry "not believable". Sure, but these books are not about solving crimes with dogged police work. Again...these are not police procedurals. Yes, they have crimes at their core, but only to hang the many characters, the twisted plot, the parallel story lines, and the suspense on. Think Charlie Huston meets David Koontz (some clues even come to our heroes psychically through Byrne's battered brain). Few of us would complain about the lack of "believability" in many of the movies we see; it's a movie--pure fantasy.

Yes, there are the cliches of Jessica Balzano, tough female detective who boxes, and her tough but much damaged (natch) older male partner Kevin Byrne, both of whose main vulnerabilies are their children, and their good hearts. In each book so far, Balzano and Byrne, regularly find themselves (or their friends and loved ones) at great physical risk, and in very tight life-threatening spots which require miraculously well-timed rescues. And yes, as a number of reviewers have pointed out, Montanari's writing seems to be of the school of "Why use two or three words when an entire paragraph, or better yet, a long interior monologue will do--we can just suspend the intense action for a few minutes". But hey, for those of us who can enjoy highly fictionalized crime thrillers replete with melodrama, Montanari does it quite well, and with a more than reasonable command of the English language, which is not always the case at this level of literature. All of the above add up to why it was brilliant to use Scott Brick to narrate these books (so far). As one reviewer remarked, he could make the phone book sound dramatic. Montanari's and Brick's styles are a pitch perfect match.

There is some violence, and the crimes are gory even though we are not usually present when they are committed. The language is medium; what you'd expect in an adult cop story. The unfortunate part of this series is that if you get hooked, and if you get to numbers 5 and 6, not only are they not available on Audible, they are also not available as ebooks on either B&N or Amazon. And, in fact I can only find hard copies of them in two places in US; most are from UK. The last(?) two, 7 and 8, are here at Audible. Go figure.

Great Beginning to a Series with a Great Narrator!

Would you listen to The Rosary Girls again? Why?

Yes, the characters are complex. I like that Burns is not your ordinary detective. This book had a lot of twists and the end had me at the edge of my seat.

What other book might you compare The Rosary Girls to and why?

Maybe similar to the John Lutz novel, only because both killers are twisted however "the rosary girls" can stand on its own as creepy.

I can't say enough about Scott Brick, he could read me the dictionary. I chose this book because Scott was the narrator and I'm delighted to see he is the voice for the rest of the series. I will be listening to the second book in this series next.

****SPOILER***** The ending in the basement during the storm was intense. That's all I'm going to say.

Great book, I highly recommend it.

Always enjoy Scott Brick, my favorite reader. This is my first book by this author and I certainly plan on reading more. Excellent book,
nice twists and turns. Great character development. Highly recommend!

I found this book, because I listen to all books read by Scott Brick. Well, having been born and bred in a small suburb outside of Phila....what a treat this book was! For me, the city of Phila became a character in this book and I loved that I could actually visualize the settings, because for the most part, I had actually been there at one time or another. But fear not, even if you are not a Philly native, this story's great, and Scott Brick as always is AMAZING! I found the story so intriguing, I went out and bought the hardcover for my husband who could not put it down.

Not realistic or believable

I was terribly dissapointed by this "cliche"ridden book. In an effort to build suspense, the author over-uses red herrings to the point that he creates characters just to be a red herring, then they dissapear. Coincidences abound. Seems like everybody in the book drives the same car as the killer, several people meet not just some, but all of the characteristics of the killer. To top it all, if the police need to be late to the scene to build suspense, traffic jams magically appear. The killer abducts girls in broad daylight, in busy areas, and nobody ever sees him. There is even a "dark and stormy night". The police are so inept that I found myself wanting to yell: "Don't lay down your weapon before you go into the dark basement'you idiot!" Not believable.

Just finished this audio.... my first Richard Montanari book... and it will not be my last! I was ready to give this a 3 star rating, as just an average thriller.... thought I had the case solved within the 1st quarter or so of the story... then Blam! Huge twist I didn't see coming. Nicely done. Very solid character, plot, and setting development. Of course, Scott Brick did an excellent job with the narration. I am going to see what else Montanari has to offer right now:) Enjoy!

I liked the plot and characters of this book. Had some real excitement and unique "murders". Only had two small annoyances, the reader had such a gravelly voice that took some getting used to but never really felt right and the author threw in some "copspeak" lingo that wasn't familiar and felt ostentatious and was unnecessary. Would recommend this to anyone.

I've read Richard Montanari books before and loved them, being gripped from start to finish. This Audible was hard to follow and the most un gripping book I've ever read/listend to. Disappointed!!

Certainly not the best...

As a prolific reader of US crime fiction I often find myself irritated by the errors made by some American authors when describing UK locations, buildings, customs etc. Mr Montanari certainly falls into that category by his repeated reference to Berwick-on-Tweed being in the Lake District. That, along with his tendency to over-explain his characters and their backgrounds, detracts from what would otherwise have been a decent storyline. Sadly, too, on this occasion the usually excellent Scott Brick was not up to the mark ... perhaps he, too, was not convinced by what he was required to narrate. Not an author I would read again, I’m afraid.

Great writing and suspense from Richard Montanari. Will definitely be listening to the other books in this series.

I have my favourite crime authors (Lehane, Coben, Crais, Connelly) but had exhausted all their books and was desperate to find a new author to enjoy. Step forward, Richard Montanari!

I actually listened to the third book in the series before listening to this, the first in the series. Like his other books, this moves along at a cracking pace with a couple of nice sub-plots and chock-ful of likely suspects. Never yet guessed the perp before the denouement, though. Always the sign of a good author!

If I have any criticism, it is that all his villains are always devilishly clever which gets a little formulaic after you've read several books.

However, that apart, I strongly recommend this book to all fans of Amercian crime fiction. His latest is already on my wishlist