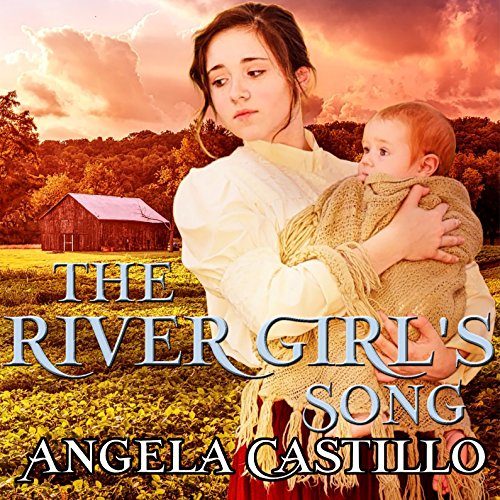 By: Angela Castillo
Narrated by: J. Grace Pennington
Try for $0.00

Zillia Bright never dreamed she would be orphaned at 16 and left to care for her baby brother and papa's farm. With only a mule and a 100-year-old shotgun, she must fight to protect what's hers. Countless dangers lurk on the Bastrop, Texas, riverside. Zillia must rely on the help of her best friends, Soonie and Wylder, to hold her world together. With Zillia's struggles come unexpected miracles, and proof that God might just listen to the prayers of a river girl.

What listeners say about The River Girl's Song

A fantastic story woven into the Texas countryside

What did you love best about The River Girl's Song?

The characters and their relationships are stellar. The story line is realistic and very satisfying. I just finished with a huge smile on my face, and I'm going straight to the next book!

My favorite scene was when disaster struck at a lumber mill. I had already decided in my mind what would happen, but I was totally wrong. The unexpected twist made the book that much better!

Don't mess with Texas. It'll mess you right back.

wonderful story of love, terrible loss of dear loved one, cruel stepfather, daughter struggling to run farm, care for her baby brother..,..and finally accept marriage proposal ........will not reveal more.. this was worth the money I spent for it......yahoooo...no illicit sex. I highly recommend this book!!

Would you listen to The River Girl's Song again? Why?

No. I didn't find the narrator engaging enough - I'm a fast reader, and I found the narration made the novel seem slow.

Would you be willing to try another one of J. Grace Pennington’s performances?

If you could take any character from The River Girl's Song out to dinner, who would it be and why?

I listened to The River Girl's Song as an audiobook, and I think I would have enjoyed it more if I'd actually read it. The audiobook felt very slow—I'm a fast reader, and could have read it much faster than it was being narrated. The narration was clear, although there were a couple of words I had trouble picking up because of her accent (which Americans probably wouldn't even notice, but I'm from New Zealand).

But the story was lovely. Zillia Bright is orphaned at the age of sixteen, and left to care for her newborn baby brother. Her stepfather leaves the two of them alone on the farm, taking with him everything of value, leaving Zillia to struggle with the farm, and with raising her brother.

She has the help and support of her some of her neighbours, especially Soonie and Wylder, the half-Comanche sister and brother who live on the next farm over. As well as befriending and helping her, they show God's love, and teach her that God will listen to the her song and answer her prayers.

A sweet Christian romance with a real feel-good ending. And there is a (free on Kindle) sequel, which follows Soonie's story. I'm looking forward to reading it.

Thanks to Angela Castillo for providing a free audiobook for review.

Overall I enjoyed the story. Not too long, not too short. The story seemed well thought out, though the plot did jump around a bit. Other commenters noted that it was sort of sporadic but it was almost charming in a way. Much like looking into shadow boxes of the different scenes described. The plot lines were nicely rounded out like an iron to wrinkled clothes.

As far as the narration goes I thought that Grace had a good grasp of intended inflection of tone and convenience of character. My only critique would be that her voice is quite soft and airy. It has a very nice timbre and flow but oftentimes the softness conveyed more of the wary uneasiness that the main character had into the other characters.


Summary:
I must have a thing for stories with kids being abandoned. This is the second book in 2 days with that beginning. Zillia Bright ends up caring for her baby brother and a farm when her mother’s good-for-nothing husband high-tails it soon after the kid is born.

Additional Comments:
• 3/5 stars Performance: It’s decent. I’ve heard a lot of books read by this narrator. She has a nice, clear voice and good reading instincts. She does not have a very wide range of character voices though. She has 3-4 solid female voices and 1-2 solid male voices. She does a credible job with songs, though it is startling at 2.3x speed.
• Normally, this kind of series can be read out of order, but I accidentally reversed books 1-2, and I believe they would have been much better read in order. The parts of book 2 featuring this character seemed very odd without having heard her story first.
• Typical clean historical Christian fiction. I did like the very small taste of action near the end. Other than that, it’s pretty much 4 hrs of this woman’s daily life. Nothing earth-shattering, nothing terrible.
• There aren’t many in-betweens in stories like this. The characters are either paragons of light and purity or complete jerks.

Conclusion:
If you like clean, historical Christian fiction, this is a decent series.

*I got the book on a free code site. I understand I do not have a set-in-stone obligation to share my thoughts but have freely chosen to do so anyway.

This is not my usual genre, but I thoroughly enjoyed this story. The hardship was realistic, the family ties heart warming, and the friendship that grew into love was at the heart of it all. I searched for more stories of these lovely characters and will happily continue to invest in their story.
The narrator did a great job with her intonation, voice variations, and interpretation of the story. Her voice was pleasant to listen to and allowed the listener to be swept away by her telling of the tale.

I really enjoy this author!

I have now listened to four of this author's books. Some contemporary some historical. I have enjoyed every one of them.

This book was amazing. It had a great storyline. Full of heartbreak and love. It talked about God but it wasn’t preachy. I loved the characters and was happy with how the book ended. The narrator was awesome- I loved her voice and her singing.

A hard life gets even harder for this 16 yr old girl! But with God’s grace and the love of good friends, she’s not alone! Can she ever have hope for a better future? This was a story that truly touched me! Beautifully written. The narrator was excellent and I enjoyed the singing parts! Often times the narrators just speaks songs!!

A sweet story of a girl coming of age during trying times. I really enjoyed listening.

A lovely book I enjoyed listening from the start to the end.

It is set in the outback of Texas in the early ranching days, of lawlessness and cowboys and indians.