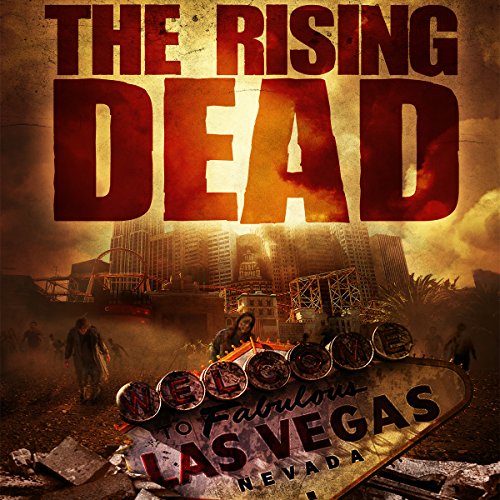 By: Devan Sagliani
Narrated by: Michael Pauley
Try for $0.00

Chaos breaks out when a virulent new strain of biological warfare is unwittingly released into the general population, causing all who are infected with it to turn into flesh-hungry monsters driven by a hive mind that yearns to feed.

Gunner, a paranoid war veteran and the head of security at the Biotech lab where the designer virus was created, knew this day would eventually come. That's why he spent nearly every day since his return from Iraq preparing for the end of the world. It's up to him to save the residents of Thunderdome, a run down apartment complex in Northern Las Vegas.

Max hosts a live show as Asphyxia Stardust, a semi-nude cosplayer with a love of all things horror who is hosting the city's first ZombieCon.

Travis is a computer nerd-slash-borderline stalker obsessed with zombies and Gemma, a misunderstood party girl everyone thinks is a tease. His roommate Parker is a star athlete gone bad who spends his days partying and chasing skirts.

Holt is a stereotypical frat boy who finds new meaning in the apocalypse as a warrior for God with a crowbar sent to kill demons from the pit of hell. Together this unlikely band of college students and burnouts fight their way through a zombie horde in search of somewhere safe to take refuge, encountering every horror imaginable along the way.

Is this an inescapable global pandemic or can they find a safe zone outside of Sin City and away from the endless sea of rotting monsters with razor-sharp teeth trying to infect and kill them?

What listeners say about The Rising Dead

This is my favorite of Sagliani's books. I was apprehensive about listening to the audio because I'd enjoyed the ebook version so much. I'm glad I did, though. This audiobook is unlike any I've listened to. Narrator, Michael Pauley not only gave a wide range of characterization but also scored the book with sound effects.

At first, I'll admit I was on the fence about the sound effects. After about 30 minutes of listening they weren't such a novelty and fit in with the story well. If you loved the 'We're Alive' audio drama, then you'll definitely appreciate The Rising Dead in audio.

I'm a massive zombie fanatic, and pride myself in boasting a collection of close to a thousand undead titles. It's a huge undertaking to 'scare' me at this stage in the game...for books at least. But when I heard those zombies moaning, it freaked me the hell out! So much so that at first I had to turn the lights on while listening in bed. Finally I had to resort to putting the volume down so low that I could barely make out even the voices. If I couldn't hear the moans then I couldn't have nightmares.

First things first, I have to talk about the performance and sound effects!! It was freaking awesome!! I started listening to what I thought would be a normal zombie book, but was so surprised to find this had sound effects (I didn't read any reviews prior to starting it). Now initially it distracted me because this is my first audio with sound effects, but that quickly went away and I found myself eagerly awaiting more. The sound the narrator used for the zombies was, without a doubt, truly frightening. Listening to them munch and moan was super creepy and scared me!!! The sound of the heartbeats made mine go faster and the extra effects like footsteps, bangs, knocks etc, just made the whole experience amazing.

Now even apart from the effects, the narrator himself was excellent. He truly knows how to bring the story alive. He gave each character their own tone and was able to ramp up the tension when needed. I started this and had to keep listening because he drew me right in. I will say though, that I didn't listen to this at night because the effects scared the daylights out of me!!! Bravo to the narrator for making this book that extra bit special.

Now onto the story itself. We are brought into the action straight away and its pretty much non stop the whole time. From the start of the outbreak, which is explained perfectly, to the last page we are brought on a terrifying journey with a cast of misfits, who you can't help but like. Each character has their own tale, yet each intertwine to make a well developed and action packed plot.

The setting was another positive for the story. This isn't the ritzy part of Las Vegas, this is the seedier side where even the cops wont venture. Since this is the down and dirty, bloody, gory kind of Zombie book, I think the setting was perfect!!

In all this was an amazing experience. The sound effects and narrator made this audio a must listen. No matter if you are a hard core Zombie enthusiast or just someone looking for a great listen, this is something you need to check out. The world the author has created is bleak and deadly yet you can't help but want to dive right in. This is my first book by this author but it won't be my last. He really captured my attention with his writing and ability to weave a darkly delicious story. Can't wait for the next one because that ending was killer, literally ;)

*I received a copy of this in exchange for an honest review. All thoughts and opinions are my own.*

I found it just "OK"

The first few chapters is about a campy scene with a couple on holiday near the wilderness somewhere and it actually scared me. The sound effect was a surprise, just breathing, but it terrified me. I was listening while cross training at the gym and hope nobody saw me grimacing.

Unfortunately I think that was the best part of the entire story. We then get taken on a ride with many different characters with too much background story. Parker is like the main character in the story, but he is so annoying, constantly complaining on Gunnar who saves his life all the time while Parker himself is useless. Then there are just a lot of weird bits in the story and doing of weird things. Holt was completely weird and inexplicable. Holy warrior; what? Sewer civilization; really?

There are some recording issues; the volume seems to go up and down. It was generally too low. Even on max volume it could be difficult to hear when I am out and about or at the gym and then it would suddenly switch to a higher level, or the sound effect would be much higher. At one place the recording abruptly cut off and even repeated. Sometimes the sound effects were appropriate, sometimes it felt it was too much. The actual narration on the other hand was very good.

Hard to put my finger on it...

I was hoping, when I read a review that stated there were special effects, that I would like this better. After just one listen, I doubt I will listen a second time. Too many clichéd character types. Silly and inconsistent actions by the characters. Just not an enjoyable work as far as I'm concerned.

I made it through a torturous 34 minutes. The sound effects are so terrible. Why they felt that all of the sounds were needed is beyond me. At one point I fast forwarded through five, yes FIVE minutes of narration that couldn’t be heard over the police sirens. I wish I could return this book but because it’s one of my stockpiled ones from over a year ago I am out of luck. I hope this review saves you the credit.
Horrible. Just because of the awful sound effects.

Love the story had lots great zombie auction and gore . I was not sure on the sound affects some times it went on to long and it took about from the reading of the story. But even with that it was a wonder full story and i would listen to it again and have already recommend to friends Had a few twist and some different take on the normal story

I had previously read this book but wanted to check out the audible version and am so glad that I did. The sound effects are amazing! I am not easily scared, but the excellent narration along with the sound effects had my heart racing. The characters are so well done that I found myself interacting and yelling at them a few times. If you like zombies, this is a must listen.

I enjoyed the story and the narrator's performance but I found the sound effects to be distracting.

really confusing from start to ed