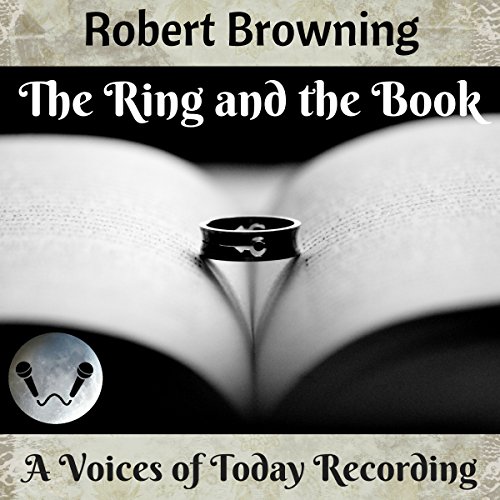 The Ring and the Book

The Ring and the Book, by Robert Browning, presented by Voices of Today.

The Ring and the Book is a verse novel of sex, lies, and murder, authored by Robert Browning, and it is widely considered to be one of the greatest literary works of the 19th century. It’s a “true crime” story based on the proceedings of a Roman murder trial held in 1698.

Each of the 12 books consists of a dramatic monologue in the voice of a different character involved in the tale, a wide range of personalities including: Pompilia, a beautiful young bride, unhappy in her marriage; the cruel Count Franceschini, her older husband; Caponsacchi, a handsome young priest who helps her escape from her husband’s tyranny; two lawyers; and the pope, who renders ultimate judgment.

“It is the great epic of the age, because it is the expression of the belief, it might almost be said, of the discovery, that no man ever lived upon this earth without possessing a point of view.” (G. K. Chesterton)

What listeners say about The Ring and the Book

This recording by volunteer speakers, is available for free on Archive.org. Why does Audible.com sell this for profit? A very deceptive and unethical practice, and every month Audible 'publishes' new recordings which are public domain, and free of charge online.
Shame on you, Audible.com

Available only via Audible

Another reviewer who charged that this production is available free on Archive.org is dead wrong. This production is unique to Audible and is not available for free anywhere else. This is a "full cast" recording, where each character is voiced by a different actor. It is also complete and unabridged.