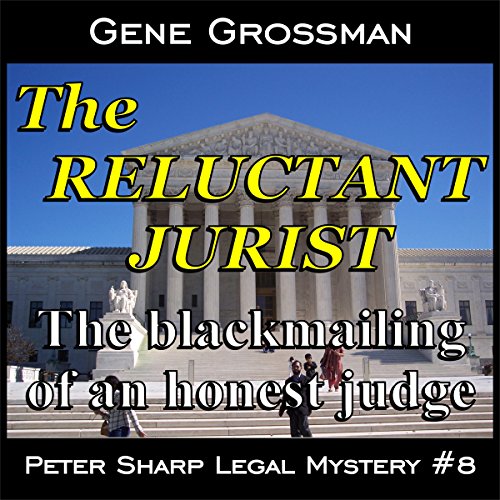 The case involved in this Peter Sharp adventure is a dramatic escalation of the jury-tampering attempts made by organized crime back in the roaring 20's when one of their leaders' freedom was in jeopardy, in that it goes a step higher and threatens not a juror, but the judge hearing the case.

It doesn't matter to these criminals that the jury will determine guilt or innocence of the accused, because this defendant on trial is also an attorney, and he is aware of the fact, that in this jurisdiction, a judge has the power to set aside a jury's guilty verdict, and find the defendant innocent.

The usual warnings are given as to bringing the authorities into this threat, and the judge takes them seriously enough to follow that demand, leaving very few choices for a safe, favorable solution, that also brings justice to the culprits.

The clock is ticking and time is running out as the conclusion of the trial is rapidly approaching, so attorney Peter Sharp is forced into drastic action to defeat this hostage situation, and its attempt to extort an acquittal of the attorney on trial.

Thanks to assistance from an unbelievable source, Peter may have found the clue to where his plan should be put into effect so that the situation might be resolved satisfactorily, but you'll be sitting on the edge of your seat as this thrilling adventure come to an end, complete with an undercover operation, the FBI, and Peter Sharp, unexpectedly armed and dangerous.

This is surely one the most exciting of all the cases in this series of 20 books that Gene Grossman has written, that chronicle the adventures of attorney Peter Sharp, his 13-year-old computer-genius legal ward Suzi, and Peter's bitter ex-wife Myra - the top District Attorney prosecutor of Los Angeles County.

I had never read or listened to any of the other Peter Sharp Legal Mysteries, but even if I had, I would find it difficult to imagine that it would have made a difference as to my level of interest and enjoyment of this title. I found both the story-line and character development to be very shallow (perhaps said characters are fully developed in earlier installments) which prevents this work from being a standalone listen. Aside from that, I certainly would not classify this as a legal thriller and/or mystery as the outcome was pretty transparent and, despite a kidnapping of sorts, I found little I would consider thrilling in the story.

The one redeeming quality of the title was the narration of Richard Rieman, whose work I previously enjoyed in the Joe Rubinstein Story of Auchwitz. In this case Rieman did what I thought was a great job in trying to add some enthusiasm to a rather unimaginative story. In fact, if not for the narration, I probably only would have given this overall listen 1-star.

I do not think I am one to be overly critical, but I was asked to submit an honest review and, with some reluctance, here you have mine. A review copy of this audiobook was provided by the author, narrator, or publisher at no cost in return for this unbiased review. My hope is that this review helps in your decision to obtain this book.

Legal Thriller, it is not.

This is a far cry from a legal thriller but more of a flop.
I made too many notes to include them all here, and it's not even worth the time.
Within the first hour, we learn more information about staged accidents and how it benefits crooked physicians and lawyers than necessary.
The MC, the supposed reluctant judge in the juvenile system, goes on a power trip with how to run his new, temporary courtroom.
Oh, and he thinks a delinquent sixteen year old who can't read (who comes from an illiterate family as well) will miraculously be able to read to his age/grade level within a year.
How the hell *ANYTHING* in the legal system could be used in the same sentence with the word 'kosher' leaves one thinking either the author is an illiterate simpleton or the character is. Possibly both.
Does he really think another judge will talk about a sexual encounter in chambers? He's obviously watched too much porn.
This has been hands down the most disappointing letdown I've encountered and a waste of an Audible credit. BTW, disclaimer: &quot;I was given this free review copy audiobook at my request and have voluntarily left this review.&quot;
Except I enjoy listening to Richard Reiman. He has brought many books to a more life-like pulse, but this one has decomposed ... I would still second guess picking up another book from him, simply because he narrated though.
I would not recommend this book, series, nor author.

"You're in for a real treat. What a novel! It takes your breath away and doesn't come back until the book (or case) is closed..Dynamic action and suspense collide with intellect in this psychological thriller."

We finally got there!

Peter Sharp is a relaxed lawyer. He is the guardian of a brilliant 8-year-old who helps run his business. It took quite a while to get to the meat of the story – what comes before seems to be kind of a mis-mash of information but all made sense at the end.


*I received this book in exchange for my unbiased review. If you found the review helpful, would you take a moment and select – yes –below? Consider following me on Audible too.

Corruption doesn't win all the time

Yes, a good story with twists and turns

Good diction, easy to listen to

Got tense when they kidnapped Susie

"I was given this free review copy audiobook at my request and have voluntarily left this review”.

I don't know how I missed this series but I'm glad that I know it exists now! What a great Saturday afternoon listen.

I loved the light humor in the writing and the self-deprecating nature of the main character. He was endearing.

This listen didn't get bogged down with minutia. It set up a good story with likable characters and then wrapped it up.

The narrator was the perfect choice and delivered just the right amount of snark.

There were some references to earlier books and now I have to go hunt them down because this listen was perfection.

A real insight into what can happen to good people. A real interesting book to listen to. The narrator is great. I received this audio book for free at my request and voluntarily reviewed.

I loved the narrator, he was brilliant. He made this audiobook very easy to listen to. I liked the main character and his pre-teen ward Suzi. I thought that they were well written and characterised.

I think that the plot was a bit lacklustre, which was a letdown because the blurb made it sound really interesting. And it was interesting if you like random facts, which this was full of. I did learn about how staged accidents benefits crooked doctors and lawyers, which wasn’t altogether relevant.

The rubber chicken tasted as expected.

Peter Sharp is a laid back lawyer who lives, with his pre-teen ward, Suzi, on a houseboat from which they also run his legal practise. Yes, they run it, because Suzi is something of a legal whizz kid. When, during an outbreak of influenza, Peter is asked to serve as a temporary judge, he is flattered but reluctant. Rightly so, as things turn out...

Written as in the first person, Richard Reiman is very good at portraying the comfortable but cynical legal man, out thought by his young ward and his high powered ex-wife, Myra, now the District Attorney. As well as being the voice of Peter, Mr.Reiman's vocal interpretations of the other protagonists is also distinctive. And the whole is an amusing, very human, telling of a slice of Peter's life. Easy to listen to, this is an endearing but also thrilling little tale mixed with assorted snippets of information.

This is the first time I have encountered this series of stories by author, Gene Grossman, and I have to thank the rights holder of The Reluctant Jurist for gifting me a complementary copy of the book, via Audiobook Boom and thus introducing me to them. In a small way, they are reminiscent of the wonderful Lady Justice stories by Robert Thornhill, which I love, and I will certainly be looking out for more of the Peter Sharp legal mysteries.