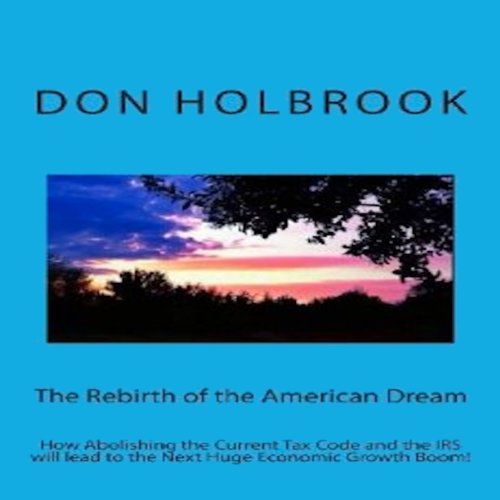 The Rebirth of the American Dream

How Abolishing the Current Tax Code and the IRS Will Lead to the Next Huge Economic Growth Boom!
By: Don Allen Holbrook
Narrated by: John LoPrete
Length: 1 hr and 38 mins
Categories: Money & Finance
4 out of 5 stars 4.0 (1 rating)

The Rebirth of the American Dream

The greatest American economic development stimulus policy to create prosperity and renewed growth and much needed jobs would be the abolishment of the current tax code in favor of a new hybrid flat and fair tax code. Holbrook demonstrates how this new tax code would be equitable and fair to all Americans.

His argument is that with the elimination of personal taxes and a new three layer tax code built on the pay as we go principal of consumption taxes, corporate gross revenue taxes, coupled with excise, import and licensure fees the U.S. would have the lowest tax environment in the world with the greatest revenue. It would also balance the budget to current costs and all us to pay off our longterm national debt to become fiscally the envy of the world. This would create the greatest economic boom in United States recent history as companies would flock back to the United States for new investments and thus create much needed jobs for Americans!