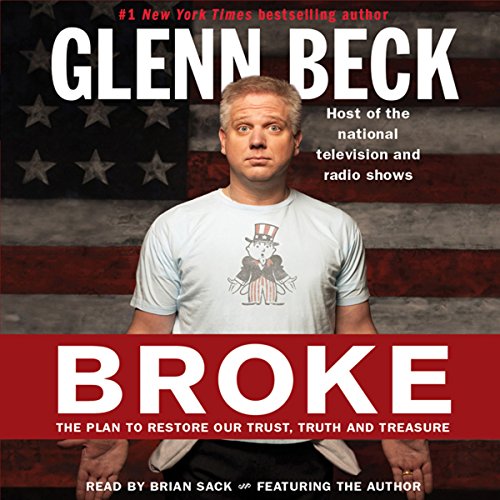 The fight to fix America - before it's too late.

In the words of Harvard economist Niall Ferguson, the United States is “an empire on the edge of chaos.” Why? Glenn Beck thinks the answer is pretty simple: Because we’ve turned our backs on the Constitution.

Yes, our country is financially broke, but that’s just a side effect of our broken spirit, our broken faith in government, the broken promises by our leaders, and a broken political system that has centralized power at the expense of individual rights.

There is a lot of work ahead, but we can’t move forward until we first understand how we got here. Starting with the American Revolution, Glenn takes readers on an express train through 234 years of history, culminating with the Great Recession and the bipartisan recklessness of Presidents Bush and Obama. It’s the history lesson we all wished we’d had in school. (Did you know, for example, that FDR once made a key New Deal policy decision based on his lucky number?)

Along the way, you’ll see how everything you thought you knew about the political parties is a lie, how Democrats and Republicans alike used to fight for minimum government and maximum freedom, and how both parties have been taken over by a cancer called ��progressivism.” By the end, you’ll understand why no president, no congress and no court can fix this problem alone.

What listeners say about Broke

What did you love best about Broke?

I really loved how in the beginning of the book Beck talks about the Romans and there government. How the policies of finance lead to fall of a great empire. Then to detail the fiscal policy, in short, of each president from the first to the last; a great relation.

Again, it was the beginning.

Which character – as performed by Glenn Beck and Brian Sack – was your favorite?

This book definitely gave me a better insight to the polices of President and how debt really is crushing America.

No one likes to hear the truth, especially from a polarizing figure like Glenn Beck, but here it is! The narration of this book is great. The facts presented are thought provoking and the conclusions and Mr Beck's ideas are sane and rational. But, we live in an insane, irrational world so good luck.

What did you love best about Broke?

This book gives a good over view of the mess we are in now and how be got here.

Did Glenn Beck and Brian Sack do a good job differentiating all the characters? How?

yes, their voices are not similar

I found it informative. I already knew to cry, I work each day.

The book covers a ton of detail, and it explains just how far we have come. The entire system is unbelievably broken and is not what it is advertised or designed to be by our founding fathers. Very educational with great history lessons which are then brought forward to show their relevance and application today. Read it or continue to be quietly led to bankruptcy by our progressive system.

Glenn Beck is always a good narrator. although I don't always agree with him, I always enjoy listening to his perspectives.

Glen Beck is very informative, clear and issues our country a challenge to fix what has somehow went off our rightful path. Simply put and easy to understand. Though the truth isn't always pleasant to hear, it does open one's eyes to possibilities. Thank you

This guy does not know economics or the history of economics. He needs to do a lot more studying on the subject before he writes or speaks on the subject.

Throw the politicians out before it's too late!

Oops we already tried that.
Great history and great recommendations about what to do from here.
This is a very worthwhile read/listen. Given our political landscape and the calibre of our politicians and electorate I believe we have ten to twenty years before our currency collapses and/or we default. Our nation is on an unstoppable downward spiral. Nice job on the book though.

There are lots of historical references (I did not verify), but it seems some of the opinions expressed were a bit off the wall and incomplete. Being fiscally conservative and anti-big government, the book is a good read (listen) but doesn't ring well with the conclusions. Question government motivations and question the thought processes and conclusions of this book.

the topics that Beck hits upon make you realize how close to the edge we are. enjoyed it, worth a listen.

Well written but far fetched argumentation – at least from a European perspektive. Religion is the start and the end of any discussion.