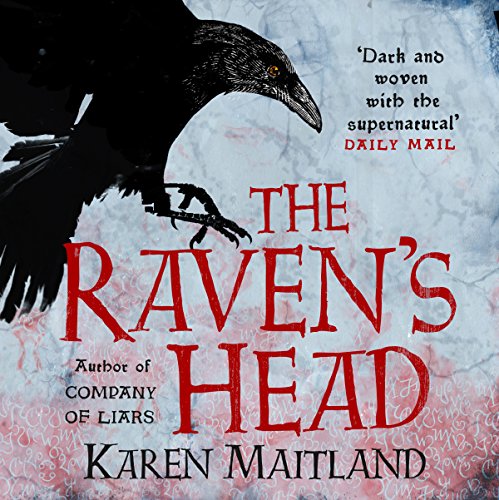 By: Karen Maitland
Narrated by: Jonathan Keeble
Try for $0.00

The Raven's Head by Karen Maitland, author of the bestselling and much-loved Company of Liars, will delight fans of Kate Mosse or Deborah Harkness seeking a new, dark fix.

Vincent is an apprentice librarian who stumbles upon a secret powerful enough to destroy his master. With the foolish arrogance of youth, he attempts blackmail but the attempt fails and Vincent finds himself on the run and in possession of an intricately carved silver raven's head.

Any attempt to sell the head fails.... until Vincent tries to palm it off on the intimidating Lord Sylvain - unbeknown to Vincent, a powerful Alchemist with an all-consuming quest. Once more Vincent's life is in danger because Sylvain and his neighbours, the menacing White Canons, consider him a predestined sacrifice in their shocking experiment.

Chilling and with compelling hints of the supernatural, The Raven's Head is a triumph for Karen Maitland, Queen of the Dark Ages.

What listeners say about The Raven's Head

This is a nice story Brilliantly read. Not really Black Gothic but entertaining until the end.

Darkly medieval - not for the faint hearted!

Would you try another book written by Karen Maitland or narrated by Jonathan Keeble?

A little less cruel. Many of the scenes were very upsetting and hard to listen to. It spoiled an otherwise good tale. Caution advised.

Caution advised. Scenes of great suffering involving children. It took me out of y comfort zone.

Enjoyable enough tosh but rather obvious twists in the plot made this less enjoyable than it might have been. However the author is really good at writing within a historical context.

the best Karen work of Karen yet! absolutely spellbinding, loved every second of it as I do all her work but this tops the lot!!

We listened to this book on the back of company of liars. But it is defiantly no where near as good as that book. There are huge gaps in the plot and way too many unresolved issues with in the narrative.

Some interesting characters in this novel, but the plot meanders and it is unclear what or who the author really intends the story to be about. Struggled to get into it and to finish.

As brilliant as ever

I very much enjoy Karen Maitland's book, the stories are exciting and, with the historical facts, informative. The narration by Jonathan Keenle is excellent. This story breaks your heart as you realise just how worthless life could be considered by some.

A really interesting story, must have took a lot of research, typically Karen mainland, great!

I read a review that said boring story and poor narration. this could not be further from the truth, both were brilliant. my favourite Karen book so far 😍👌

I have read/listened to all of Karen Maitland’s incredible books including her most recent A Gathering of Ghosts which was fantastic, but this one returns back to East Anglia and to Langley in Norfolk to tell the stories of the several protagonists in this richly dark tale.
Yes it does deal with unpleasant subjects such as child murder and yes the picture is bleak but Norfolk in medieval England WAS bleak for the most part, certainly the rural areas around the wash.
For anyone reading Maitland for the first time, please be aware she doesn’t paint a pretty Hollywood picture of life in Medieval Europe - because it wasn’t like that, when I read her novels I feel fully transported back in time and as horrible as some events transpire to be the stories are believable even if magical!
So if you don’t want to read about the real horrors that happened back then including practising the dark arts and murdering children then don’t read this. If however you love history, appreciate excellent writing and a wonderful story- this is a book for you!