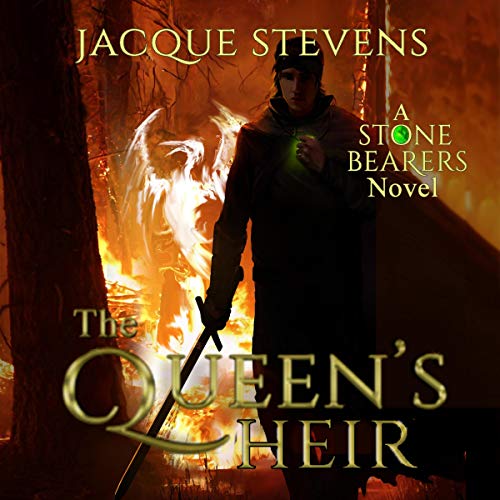 By: Jacque Stevens
Narrated by: John Pirhalla
Try for $0.00

The portal is open. The war has begun. The third installment of a coming-of-age fantasy series perfect for teen and young adult fans of Terry Brooks (Shannara), Cinda Willams Chima (The Demon King), Christopher Paolini (Eragon), and other works of epic sword and sorcery.

After being hunted by humans and transformed into a demonic creature called a drow, Drynn believes his family will be safer in the forest. Problem is, more drow are waiting for them there.

When his brother is taken by the same drow who burned his home, Drynn is told that he needs the ashes of the phoenix to defeat them. It only would require him to return to the human kingdom and all the dangers he thought he left behind.

But when he discovers that his brother has been forced to join the ranks of the drow, it seems they may have already run out of time.

Clean story. Fantasy violence, light innuendo, and a few darker themes. Recommended for young adults and teens 12 and up.

Other Books by Jacque Stevens:

Please Note: The Queen’s Opal is Book One. The Stone Bearers is a standalone novel that can be listened to before or after the full series.

The short story, The Frog’s Princess, can also be listened to in any order. Find it in The Fantastic Worlds Anthology (2016) or have a free digital copy delivered to you after signing up for my email list at sjacquebooks.com. Those on my email list will receive monthly emails with updates on deals, review opportunities for new releases, and other exclusive content.

Winter Falls: A Tale of the Snow Queen

Depths: A Tale of the Little Mermaid

What listeners say about The Queen's Heir

From the beginning, the author has created a detailed world and interesting characters. we learn a good deal about major characters and can understand why they make choices. This continues here and our heroes go through more trials and adventure. It was an interesting and engaging read throughout. My only wish was for a bit more of a climax. Something to leave me with a bit more of a reaction than "Oh, ok. Until the next one." Though I am starting to think perhaps this is meant to be more like a single book written in parts (i.e. LotR) than separate books in a series. Either way, this is an enjoyable tale and I look forward to seeing it continue. Narration continues with the same quality as the first two books. It is skillfully done, with good energy, emotion, pacing, and makes it easy to tell who is speaking. I received this audiobook for free in exchange for my honest and unbiased review.

Great addition to this series. Some Oh No's, Yes's and some revaluations! This is not a standalone, and should be listened to in order. So looking forward to the next. This audio was given to me free and I voluntarily gave this review.

I love this series! You definitely need to read them in order or you'll be lost. They do only a little recap. This series is an elven adventure, reminiscent of Lord of the Rings but I enjoyed these much more. The mystery and adventure continues in this installment and we learn more about the magic and the drow. It is clean and I would say it's really geared for middle grade to adults but I have let my 4th grader read it to and he loves them! The narration is top notch. John Pirhalla does a fantastic job with all of the voices, accents and acting-- it's really just a lot of fun to listen to! I HIGHLY RECOMMEND this series. Those who love fantasy, magic and adventure will not be disappointed. —I was given this free review copy audiobook at my request and have voluntarily left this review.

first I'm going to say this series gets better with each book leaving you wanting to know what's going to happen next. A must read and/or listen to series.