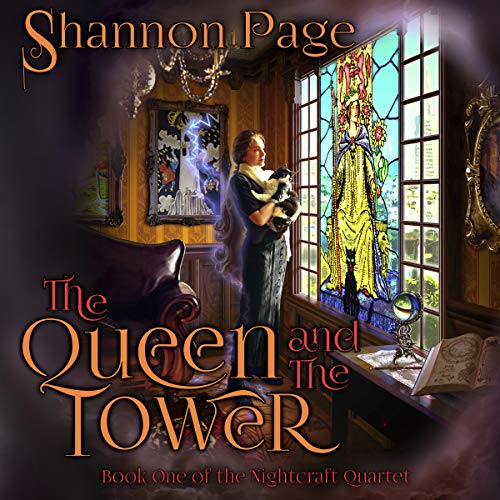 The Queen and the Tower

By: Shannon Page
Narrated by: Moira K. McKelvey
Try for $0.00

Calendula Isadora (Callie) is an uncommonly powerful witch with a mind for science. But her independent ways run afoul of her San Francisco coven house, especially when she creates life in the form of a massive golem. And her unseemly affection for her human boyfriend? Such things are simply not done among respectable witchkind.

Callie is settling into a new, more private home when the attentions of an enticingly sexy Old Country warlock complicate her relationship. Then Callie's best friend, Logandina, falls ill with a mysterious malady that causes her spirit to waste away before vanishing altogether. Worse yet, this illness appears to be contagious.

As Callie delves deeper into the mysteries behind her friend's departure, the witchkind powers-that-be try to keep her from searching for the cause - or culprit. But she defies them with help from her mentor, 800-year-old Gregorio Andromedus, and her mother, a "wild magic" witch with a talent for the tarot.

In this world of coven politics, witchkind parties cloaked with illusion, and devious warlocks, Callie finds herself embroiled in a deadly mystery...one that only becomes more complex the more she pursues its answer.

What listeners say about The Queen and the Tower

Not sure about this one

The Queen and the Tower by Shannon Page appealed to me in the book blurb and audio sample. Along the listen, things just got weird and I found myself easily distracted. The storyline was difficult to follow and I just couldn't get captivated by the listen. I requested this review copy audiobook and have voluntarily written this review.

Save your time, money, credit. I’ve lost mine.

I listened to the sample on audible as I read the sample. It sounded (and read!) intriguing and promising.
A witch creating a golem out of dirt? Naming it, too?! A mystery/thriller and supernatural/paranormal that screamed it was unique and captivating.
Yeah. That lasted to the third chapter, when she moved out, was involved in a ‘sex triangle’ - cuz she doesn’t know what love is. Juggling her human not quite boyfriend and her recently deceased friend’s love interest was just ... gross. In the same 24 hrs. They could have been cut from the same mold - or doormat. Wimpy, whiny, wheezy geezers.
Callie turned out to be TSTL, much less have a book built on her skank. None of the characters were solidly built. My pet peeve is books written in first person POV BUT gives information about characters or ‘reads’ as if it’s third person, because the MC wouldn’t know or think like that.
The magic system failed to make sense.
One moment, she can’t be alone, the next, she’s been abandoned. Like, huh?

I listened to the end simply because I had a couple very long days and I tried, tried, tried to figure out what/how/if I was missing a diamond in the rough. It kept me alert although I looked just as frazzled as my 12-14 days made me feel.
My final conclusion? It’s coal, folks. Stick it in the stocking of the person you like least. Or skip it. You aren’t missing much and you’ll gain extra hours to find anything better. Or play on social media and save the heavy thinking to composing witty memes.

A good hook into a collision of worlds

The tension the author creates kept me engaged. Relationships get complicated when a “young” witch tries to balance these two worlds that must forever be kept apart. There was a lot of old world backstory hinted at throughout, and I hope that will be explored in later books.

The performance/production quality was a little choppy.

This is a wonderfully written and narrated book, and I'm very much looking forward to the next one in the series! Callie is a very engaging, likable witch dealing with a very complicated life. The creativity that went into creating the world and all the rules that go along with it was very impressive. There was an expression that will always ring in my ears when I think about this book. At one point, Callie is ruminating, and she mentions how Jeremy is Warlock-splaining to her. It's all the little gems sparkling brilliantly while tucked into an engaging, satisfying plot that make this such a great book. The writing is top notch, and very well edited. The narrator is also a great way to enjoy the book. I originally started reading the kindle version, then got the audio version and switched back and forth between the two (which seems to be my preferred method of reading these days. All hail Amazon's WhisperSync!) I'm ready to read the next book, please!

Excellent. When is the next one coming out?

I bought this entirely on spec; I'd never read anything by this author before, but the blurb looked appealing.

It entirely justified my decision. The story is fun, the setting well-thought-out, the characters sympathetic and believable.

The reading is to my taste a little flat--I do personally prefer the kind of reading that is a performance, with voices and a little more emotion, the way I read myself--but I understand that that is a matter of taste and some prefer books to be read "straight."

My wife and I will be waiting impatiently for the next volume.