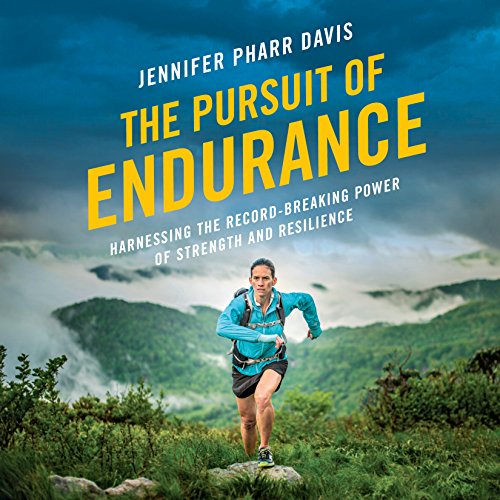 The Pursuit of Endurance

Record-holding endurance hiker Jennifer Pharr Davis explores what makes women uniquely successful in the growing sport of endurance hiking and how those lessons can allow women to push themselves past their limits and to challenge their body, mind, and life.

Unlike many sports, endurance and extreme sports record-holders are not separated by sex; there is no record-setting male and record-setting female - there is only a single record-holder. The more the sport requires endurance, the less significant the gap between women's capabilities and men's capabilities becomes. What is it about women's bodies and minds that gives them an advantage in endurance sports that they don't have in other areas? And how can women harness the power of that endurance and use it to excel in all areas of their lives?

Jennifer Pharr Davis, the former record holder of the FKT (or Fastest Known Time) on the Appalachian Trail, tells the story of her meteoric rise in the world of endurance hiking and, in doing so, unpacks key traits that make women uniquely suited to endurance. With a storyteller's ear for fascinating detail and description, she takes us with her as she sets the record on the Appalachian Trail and introduces us to the mentors who helped her to identify and unlock different facets of her endurance capabilities. She reveals and investigates just what it is that gives women the ability to excel at endurance sports in ways that men cannot. She empowers women to delve deep into their minds and bodies to find the variables that will unlock phenomenal endurance in each individual, and inspires listeners to take that new-found endurance and use it to hit new personal records in everything from sports to the boardroom.

“Nothing short of inspiring . . . A must-read for anyone wanting to start working at the big dreams they have up their sleeves.” (The Trek)

“Jennifer Pharr Davis is an understated hero who matched the speed and endurance of some of the country’s best male ultrarunners - professional athletes with corporate sponsorships and well-financed expeditions - all on her own and with relatively little fanfare. A fascinating read, and a testament to the fortitude of an extraordinary woman.” (Dean Karnazes, ultramarathoner and New York Times best-selling author)

“There’s no better guide through the scientific and psychological tangles of extreme hiking than Jennifer Pharr Davis. She knows because she lived it.” (Ben Montgomery, author of Grandma Gatewood’s Walk)

What listeners say about The Pursuit of Endurance

I waited a long time for this to come out. I thought this was going to be more about herself and more inspiring, uplifting and inspirational, but it was not... it was a lot of history and so much about everyone else. There was no character in the narration it was hard to stay awake. I really wanted to like this book.

Not What i Expected

In the audible description it states "She empowers women to delve deep into their minds and bodies to find the variables that will unlock phenomenal endurance in each individual, and inspires listeners to take that new-found endurance and use it to hit new personal records in everything from sports to the boardroom." Which made me think it was going to be about her racing experience and what she learned. It sounds as if it will speak to women specifically perhaps or even talk about the actual variables she experienced while racing.
Instead it was the history of the FKT... this wasn't clear. I was very disappointed as a trail runner. This is a niche she could use to share her knowledge and really highlight her different experiences from other male racers. The history is great to know if you are at heart an ultra runner, but the entire marketing of this book she be rewritten to state this. I was listening to North by Jurek at the same time - equally excited to buy these books on the same day. North was exactly what i was hoping to hear - personal experience, trials and tribulations. Also, the narrators voice - though very upbeat and positive, was unsettling. It is nice to hear people smile in conversation but not for an entire book. It sounded like every sentence ended on an upnote- the inflection was off which made it difficult to get into the vibe. If you are describing a difficult situation or troubling time, your voice should reflect this;

I wasn’t exactly sure about the content of this book by the title. I knew it would be about long distance hiking but that is about it. So it was a pleasant surprise as the story unfolded, to learn about the different trail record holders from JPD. JPD is so much more detail focused than I am, and the flow of her conversations with her fellow record holders was very interesting. I think she did a good job to tell the whole story on each person, in a fair way. So at the end of the book I think I have a balanced view of these remarkable people.

I’d recommend this book to anyone who wants to read a true life adventure story.

A great listen for road warriors of all kinds

This was an excellent and inspirational book. Jennifer is a great story teller whose kindness and experience provided her with the unique ability to tell the stories of endurance athletes and record breakers from an insiders perspective. Her humility in sharing her own story was genuine. The lessons learned are applicable to life for non-athletes, wanna-be athletes and couch potatoes alike. She did a terrific job of narrating the book. Her voice was friendly and comforting. The book inspires me to see beyond my own limitations and fears. Her love of nature, and especially the Appalachian Trail make me want to lace up my hiking boots and get out there!

I belong or what I end up saying “stay strong and do the work!”

I have read Jennifer’s previous books on my kindle, “Becoming Odessa”, and “Called Again”. I have enjoyed following her journey and watching her writing style change over the years. In “Becoming Odessa”, she writes about her first experience through hiking the AT right out of college. I was inspired and swept away in the wonder of her words as she describes the fear and adventure of being on the AT alone. I was impressed with her determination to finish and her bravery at doing this alone.

In “Called Again” she is married and hiking the AT with her husband. I read this book while I was training for my first full marathon. Listening to her drive and motivation for the hike I felt a kinship with this woman who felt compelled to hike the AT, as I felt compelled to run that race.

When I was scrolling through Facebook a few weeks ago, someone in one of the trail running groups I’m connected to mentioned Jennifer’s new book. I was so excited I went right away to check it out. I’m training for my second Ultra marathon now and decided I didn’t have the time to read the book, the same way I did her first two. I purchased the audible version. I was a little skeptical since audible books like this can have less than great narration. In my opinion, this can ruin the experience of the book. I was presently surprised to find that Jennifer does the narration herself. It has been a delightful listen!

A story I thought would be more personal from start to finish was more than I expected. It was the stories of many of those who came before us in distance racing. Not just the training they put in or the nutrition they consumed, though that was there too. Jennifer got the story behind the person. She answered a lot of the why’s in addition to the how’s. As an endurance athlete, I felt so connected to so many of these men and women who have gone before me to create this sport into the popular and accessible heights it’s reached. They truly paved the way and modern technology has offered the ability to collect and relay those stories on such an easy platform to absorb the tales.

My search for a book about inspirational women outdoors lead me to this read, and I’ll admit that early in the book I was concerned by all the discussion of the accomplishments of men. However, the wholistic view of endurance athletes actually provides a better story and makes the feats of the author and Heather even more inspiring. I will be recommending this read to my Women Outdoors Facebook group and other female hikers I encounter.

It was enjoyable and interesting to get an insider perspective of some of the AT record holders. Thank you Jennifer, once again home run of a book.

Jennifer Pharr Davis is a gifted story teller. I loved the thought she put into sharing the stories of other FKT record setters in this book. This will probably be something I listen to again. Her husband, Brew's, song at the end was a nice touch as well! This is motivating and inspiring to not just live the typical "American Dream".

This book hit me at a point in life that was really in need of something. What it was I didn’t know but endurance is defined within the pages of Jennifer’s writing in so many different ways that, if searching for it, one can find the way or combination of ways that, at least for me is profound.

This is a great book to listen to. Not only for the personal story, but also for the history of the AT & PCT. I normally listen when I am running but I found myself turning off the radio and also listening in the car. It was that good. Go get it , read it and HYOH.