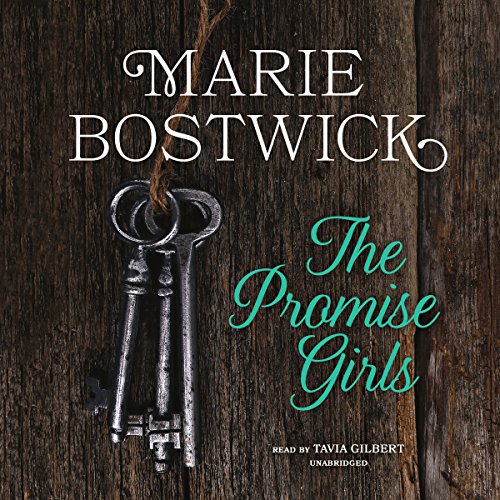 By: Marie Bostwick
Narrated by: Tavia Gilbert
Try for $0.00

Every child prodigy grows up eventually. For the Promise sisters, escaping their mother's narcissism and the notoriety that came with her best-selling book hasn't been easy. Minerva Promise claimed that her three test-tube daughters - gifted pianist Joanie, artistic Meg, and storyteller Avery - were engineered and molded to be geniuses. In adulthood, their modest lives fall far short of her grand ambitions. But now, 20 years after the book's release, she hopes to redeem herself by taking part in a new documentary.

Meg, who hasn't picked up a paintbrush in years, adamantly refuses to participate, until a car accident leaves her with crushing medical bills. While she recuperates in Seattle, the three sisters reluctantly meet with filmmaker Hal Seeger, another former prodigy. Like them, he's familiar with the weight of failed potential. But as he digs deeper, he uncovers secrets they've hidden from each other and a revelation that will challenge their beliefs, even as it spurs them to forge their own extraordinary lives at last.

What listeners say about The Promise Girls

this story was very boring. It was tough to listen to completion. I found the entire experience painful. I'm not even sure why I finished the book. It was not worth it

...can ruin even the best story - and make a lesser one almost impossible to endure. The narrator infused every line with drama and feeling, which is OK when warranted, but not as an overall narrative style at which point it simply becomes pretentious and tiring to listen to. Whew - like listening to a Drama Queen! I enjoyed Marie Bostwick's Cobbled Court and Too Much, Texas series (audiobooks), but even after 45 minutes of Promise Girls, I couldn't get into the story or care about the characters. I'd be willing to give this book another go - in print - but would not choose to listen to this narrator again.

I don't know about these negative reviews.

A very enjoyable listen. I would encourage others to try. I will be looking for more books by this author.

Couldn't even get through it

This story was waaaaaay too long. I tried so hard to stick with it but only made it a bit over half way. There was no excitement and nothing to keep me interested. Character development was not good. The writing itself was dull and the dialog between the characters was unimaginative. I am not usually so critical and I appreciate the author's effort in writing but I have more patience than most....despite that....I couldn't bring myself to waste any more time on this book. I'm so disappointed I wasted the money.

I wish someone had warned me

I picked this book based on the overwhelmingly positive reviews. Early in the book someone experiences a traumatic brain injury (TBI). Since I study TBI's in my profession, I was especially intrigued. The author's description of medical care for TBI's was nothing other than cringe worthy. And the recovery process for this person was like no other that I have experienced or heard about--unrealistic. After verbally confronting the inconsistencies within my own car, I pushed past my annoyance to enjoy the book like so many other people have. But it was just one falsehood after the next, and anybody who has experience in counseling should be horrified at the take-home messages in this book. Below is a list of the glaringly problematic themes/messages.

1. personal boundaries are wrong and should not be respected by others
2. Listen to other people over your own intuition.
3. It is ok to manipulate, force, and coerce in order to get someone to do what you want
4. your life will magically improve when god is discovered
5. CHILD RAPE IS OK!! (yes, this is in there, and celebrated as a beautiful relationship between a 16 year old and a 60 year old).
6. The book also layers in tons of sex shaming

At one point the husband withholds physical intimacy because his wife doesn't remember enough of their initial marriage vows; forcing her to choose to renew her vows or end the relationship. This was after she expressed her own personal boundary. Manipulative much?

Ugh. I only finished the book in order to write a review. I would never recommend this book.

I think I have found a new favorite author. Complex, witty, funny, sweet and satisfying.

storyline was ok. but story got alittle airline at the end. I can understand the reunion of mother and daughters at end...but the father and son thing kind of quarkie!!!

i really enjoyed this book. I Enjoyed both the story and the narration. Definitely recommend it.

So many little bits of information that helped me relate to people in my life. Also to understand the reasons sometimes behind their unusual actions. Loved each character! Well done!