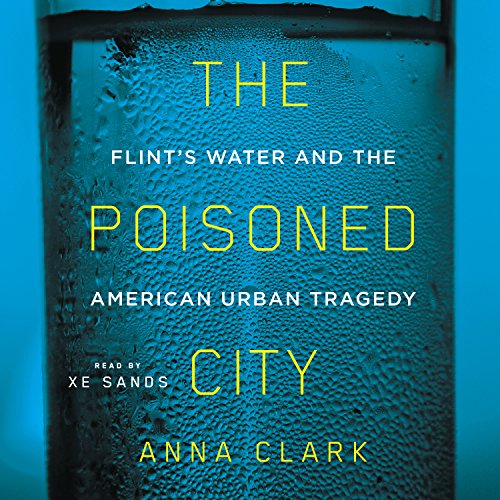 When the people of Flint, Michigan, turned on their faucets in April 2014, the water pouring out was poisoned with lead and other toxins.

Through a series of disastrous decisions, the state government had switched the city’s water supply to a source that corroded Flint’s aging lead pipes. Complaints about the foul-smelling water were dismissed: the residents of Flint, mostly poor and African American, were not seen as credible, even in matters of their own lives.

It took 18 months of activism by city residents and a band of dogged outsiders to force the state to admit that the water was poisonous. By that time, 12 people had died and Flint’s children had suffered irreparable harm. The long battle for accountability and a humane response to this man-made disaster has only just begun.

In Anna Clark's full account of this American tragedy, The Poisoned City recounts the gripping story of Flint’s poisoned water through the people who caused it, suffered from it, and exposed it. It is a chronicle of one town, but could also be about any American city, all made precarious by the neglect of infrastructure and the erosion of democratic decision making. Places like Flint are set up to fail - and for the people who live and work in them, the consequences can be fatal.

What listeners say about The Poisoned City

Living only 30 miles from Flint, I have heard a fair amount about the “Flint water crisis”. This really opened my eyes to exactly what has gone on over the last several years and just how severe the issue is. Great read if you’re looking to learn more about this crisis.

Riveting retelling of the Flint tragedy. All of the small details not told in national news leaves you asking even more "How does this happen in America?"

What a well written book. it was easy and interesting to read while learning the important story of how the Flint water crisis came to be and what we all need to do to help other cities create healthier spaces for their residents.

Absolutely fantastic. A very informative read, without being dry, or even overly political. As a water resource engineer, I was very impressed with the technical aspects (and received a personal thrill at the mentions of the AWWA, as a member). This should absolutely be a book that everyone reads.
The narrator's voice was wonderful (I am normally partial to male narrators but thoroughly enjoyed Sands' performance), and I believe kept the pace of the novel well.

This book was very Informative and makes you think!
The narrator read a little fast sometimes though and it was hard to keep up at some points.
Overall great and recomended to everyone!

this was an interesting book. as a water operator the situation in Flint is and was a hot button issue with me

a must read for michiganders

reads like a text book. but important. guess Nestlé is sending the only drinkable water out of state

The story this is about is very interesting but I found myself getting bored with too much information. I think if they edited and reduced the content it would be great.