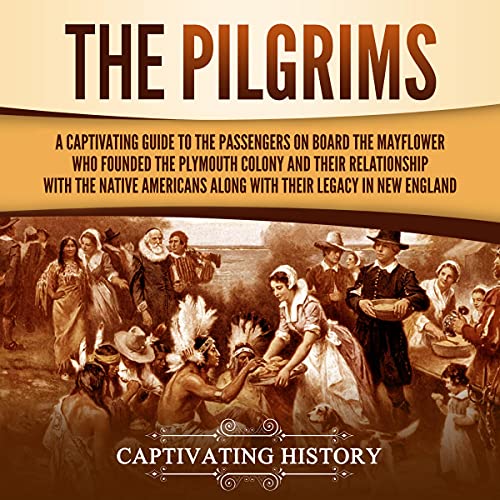 By: Captivating History
Narrated by: Colin Fluxman
Try for $0.00

Did you know that Plymouth was named by the explorer John Smith in 1608?

Twelve years later, in 1620, the Pilgrims started their journey from Plymouth, England, and were blown off course, landing in Plymouth, North America. As if it was a sign from God, the Pilgrims decided not to continue their journey but to settle right where they landed, starting one of the earliest American communities.

This audiobook traces the journey of the Pilgrims before the Mayflower even set sail. To understand what drove the Pilgrims into a form of self-exile, one must look further back to when King Henry VIII of England ruled. Religion was very important to the American settlers, and when they were not allowed to practice it the way they wanted, the Separatists emerged, demanding their religious rights and freedoms.

Listen to The Pilgrims and find out:

So if you want to learn more about the Pilgrims, scroll up and click the "buy now" button!

What listeners say about The Pilgrims

Hummm, alot of interesting facts or is this ideas of what happened? The parts about the Mayflower was very interesting and some other parts was as well.
Very good read. Narrator did a good job but at times was hard to know when a sentence ended and another began, but the ideology was there.

I admire the Pilgrims and all they went though but it amazes me they came to the New World to escape religious intolerance just to inflict religious intolerance on other. All the hardship and warring they went through you think we would have learned something from it but it seems we still deal with most of the same situation in today’s society. Great overview of their voyage and how it was in the beginning of living in the new world.

this book covers so much information that I never learned about when I was in school.

They didn’t teach this in high school!

A full recounting of the struggles and hardship of the pilgrims starting with what motivated them to leave England. Describes the courage and perseverance of these early settlers in America.

Very entertaining and chock full of facts not covered in school!

What an amazing look into our heritage

I absolutely loved the detail and the way in which it was presented. Narration great

This is an excellent audiobook about the Pilgrims. I would recommend this title to others