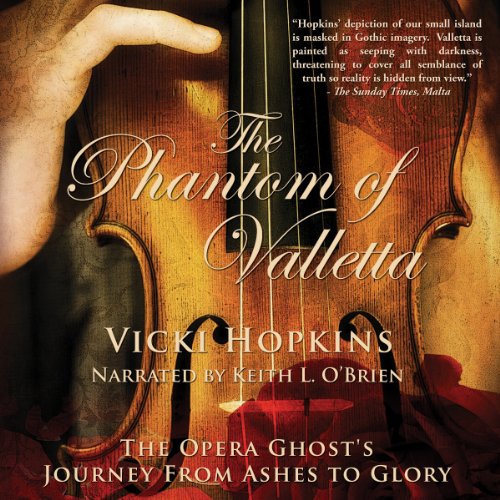 The Phantom of Valletta

Another chapter in the life of the infamous Phantom of the Opera, as penned by Gaston Leroux, continues when he leaves Paris and moves to Malta in search of a new beginning. Clothed in secrecy, he purchases The Royal Opera House in Valletta, which has been destroyed by a devastating fire. In an attempt to bury the pain of his past, the burned-out shell becomes his new obsession. He is determined to resurrect the structure from ashes and return it to glory.

To raise funds for his task, he holds a masquerade and encounters a strange woman who prophesies his destiny of undoing and death. Her words haunt the Opera Ghost, but he continues on his path of restoration. After years of hard work, the gala reopening occurs. The Phantom is convinced he has reached the pinnacle of success in his life. He rests in peace over his accomplishments.

For sheer amusement, he takes on a new student, which leads him down a path of romance, mystery, and danger. His fortune unfolds before him, and he discovers he cannot hide from those who seek retribution for his former sins. He is forced to reap the consequences and comes face-to-face with his darkest demons and fears. In the end, his insatiable hunger for beauty is challenged to the core. Will he survive the obstacles he encounters or will this finally be his undoing and death?

What listeners say about The Phantom of Valletta

I am a huge fan of The Phantom of the Opera, and as such I tend to return time and again to the story in its various forms. Much like Dracula (yet another favorite of mine), it's the story that launched a thousand "Phan-fic" sequels, as it seems that few people ever accept the open-endedness of the original tale. The problem with most of these sequels is that they all tend to fall into a very similar trap. The author becomes enthralled with the original or one of its many retellings (why else would you write a sequel?), but instead of bringing the menace and complexity of the Opera Ghost to the pages... many of them become slushy wish fulfillment. This book is one of those sequel offerings, and I'd like to say the author has avoided the slush, but no. If you're not looking for this sort of thing, put on your goulashes before wading in. The slush is a bit thick.

In the author's defense, if a romantic healing of all wounds from the original are what you're looking for (and you know who you are), this will likely be a must-read for you. The story begins with some serious promise, and the big reveals toward the end do tug on the heartstrings. If you like a cuddly and sympathetic Phantom with overtones of Scooby-Doo level creepiness, you'll probably like this version.

But I am more horror-minded, and I prefer my Phantom in the manic, Gothic glory that made the legend stick in the first place. I have no need for character revisionism. I need to feel the madness, the despair, and that ray of hope right before it's snatched away again to drive his next horrific deed. That's the Phantom as I understand him, not some temporarily insane guy with a heart of gold. He's an obsessive murderer. I need a story that sells that. It's not on Audible, but my benchmark for all stories regarding the Opera Ghost is Susan Kay's Phantom, which tells the entire lifespan of Erik, remaining true to ideas of the original and expanding upon them. Audible, if you're listening, Phantom deserves a full-cast treatment like you did with Dracula. It's tailor-made for that! Back to this book...

The little thing that bothers me to distraction is the historical setting. Knowing the Phantom's tale as I do, it's distracting that the book takes place in in the mid-1870s. It's accurate to the setting of the Valletta Opera House and its history, but the Palais Garnier in Paris where the original is set wasn't completed until the time of this book, making this story... a prequel sequel? The original novel is generally accepted to take place at the time of its 1910-1911 publication, with other versions going back as far as 1881, but the Opera House is open at that time, so it works in the historical timeline. It sounds pedantic to some, but any historical fiction enthusiast will tell you literary license is no excuse. It's just forcing the story to make sense in the hopes that nobody will notice. Again, to be fair, this book is more of a sequel to the 2004 movie version of the musical, which is set in 1870, and that bugged me for the same reason, the Garnier Opera House is unfinished, so the story can't happen yet. A little fact checking in the age of the internet won't kill any writer. I'll also suggest the musical has a superior sequel in Love Never Dies, which you can also find in its original novella form as The Phantom of Manhattan.

I've already remarked on the warm and fuzzy Phantom treatment. We're told how dangerous he is and reminded of his past at all turns, but he's not scary in the least here. There's a secondary romance with Madame Giry and the original manager of the Paris Opera. I'm not against romance where it serves the character development, especially in a romance novel, but this seemed a bit forced and unnecessary to me. Still, both characters do offer a good counterpoint to Erik, so others may find this more to their liking. The Phantom's latest focus, the young would-be violinist Desiree, comes across as a bit of a jumble at first. She's mousy one second, brave as a lioness the next. I think my perception of this character has two issues, both of which are sorted out by book's end. The first is that, well, she's not Christine, so that takes some getting used to, and the second is the narrator. A narrator can make or break any reading with their performance (or lack therein), and this guy comes across as canned ham. He's having fun with the material, but it lacks that gravitas that might have made the whole story seem a little more sinister than it did.

All in all, you probably already know if you're the audience for this one. If you're part of the crowd that can't get enough of the romantic side of the Phantom, dive in and enjoy. If you're looking for something with more bite, this one's a good short read (maybe too quick in places) with a solid story arc, but it won't ultimately satisfy the way the original classic does. Even so, there's still a heart to the story that makes it worth it. I think the author has a genuine love of the character and the story, and that love does much to carry the story. I'm sure it'll serve the target audience of swooning Phans. But what she wanted and what I wanted were ultimately two different things. I knew that going in and gave it a shot anyway. It still gave me a smile in the end.

A TREAT FOR PHANTOM LOVERS

This audio book definitely rates in my top three favorites.

What was one of the most memorable moments of The Phantom of Valletta?

Vicki Hopkins knows how to weave a good story. Her portrayal of Erik the Phantom is one of the best that I have read. It is believable and well researched. The minor characters can stand on their own. The Phantom of Valletta will always be a true favorite of mine.

What about Keith L. O'Brien’s performance did you like?

Keith L. O'Brien's voice gives life to the character of the Phantom. It is melodic and carries feeling of foreboding. It will capture your attention immediately and carry you through the story with a suspenseful yearning for more.

The combination of an excellent storyline and a talented voice definitely makes this an audio book that you resist stopping. Forget answering the phone. Forget using the restroom. You will be hooked.

Even if you have never been exposed to The Phantom of the Opera, readers will certainly enjoy this book on it's own merits. Hats off to Vicki Hopkins and Keith L. O'Brien for a truly enjoyable roller coaster ride that is The Phantom of Valletta.

Aweesome book to read and listen too

What did you love best about The Phantom of Valletta?

It has a happy ending unlike the Phantom of the Opera and it's believable and had you hooked to see what happens next.

To see the slow transformation of Eric from a recluse to a grouch to a teacher to a lover.

Just one? The roof scene at the end, it was truly romantic. The time when her heart was so broken and so played the violin and Eric stepped in.

Great plot that keeps you guessing from the start!

This was my first, which was a wonderful introduction to the world of audiobooks.

What other book might you compare The Phantom of Valletta to and why?

"The Phantom of the Opera" by Gaston Leroux, since this was a continuation of the story. I loved the originality of the plot which turned in directions I didn't see coming. The story was intriguing, and I enjoyed the introduction of new characters, along with those from the past, in a fresh and beautifully described setting. Ms. Hopkins explores the roles with depth and imagination which ultimately touches the heart.

He gave the characters life, and in particular I enjoyed his rendition of the phantom.

There were several interactions between the characters I found moving, but to be too specific would give the plot away.

It can be a challenging task to advance a famous story in an enticing and unique way, and this one fits the bill!