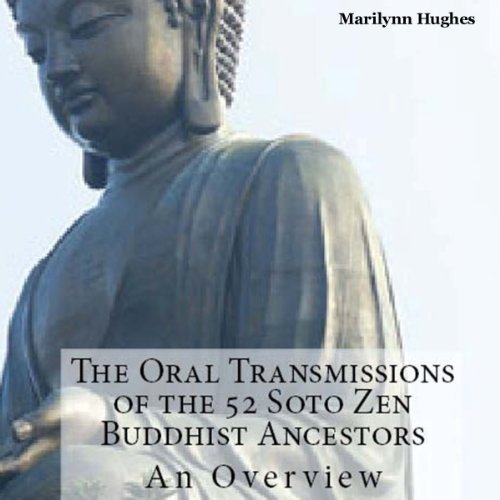 The Oral Transmissions of the 52 Soto Zen Buddhist Ancestors

By: Marilynn Hughes
Narrated by: Dave Wright
Try for $0.00

Shakyamuni Buddha founded the path of the successive 52 Soto Zen Ancestors when he awakened to the Way. The transmissions of the teachings to the 52 Ancestors in Zen Buddhist Tradition were never meant to reach the eyes of laymen. The Denkoroku: The Record of the Transmission of Light was originally written only for the eyes of Zen monks.

Shasta Abbey's late Abbess, Jiyu Kennett, who translated the text into English often said that the long sentences used in Zen would likely annoy Americans. But she made the decision to share some of the deeper teachings of Zen with the lay public even if they were unable to penetrate into the deeper meaning of the words. This audiobook gives you an overview and insight into a subject otherwise only understood through lengthy study. (For more info - www.outofbodytravel.org)

Maybe I should have read in Marilynn Hughes biography that she founded 'The Out-of-Body Travel Foundation.' The Denkoroku is foundational Zen literature and many excellent translations and commentaries are available. I assumed that the somewhat sensational description of the audiobook would not be a negative - because it's Denkoroku. How could you mess up the Denkoroku?

Well, it started with the mispronunciation of Shakyamuni Shake-ya-mani and it went downhill from there. Repetitive, missing the point, mispronounced. I was not able to finish listening to the audiobook. This is the worst I ever bought from Audible.