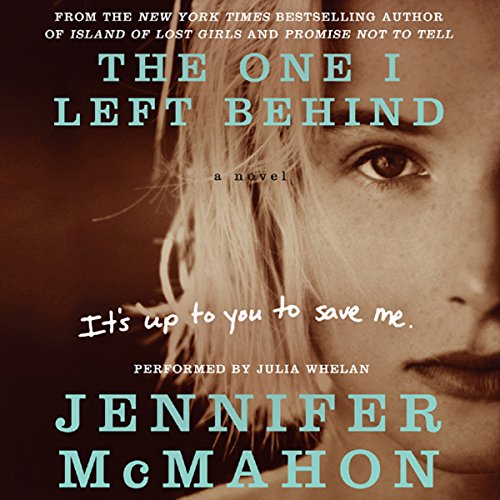 The One I Left Behind

By: Jennifer McMahon
Narrated by: Julia Whelan
Try for $0.00

The summer of 1985 changes Reggie’s life. An awkward 13-year-old, she finds herself mixed up with the school outcasts. That same summer, a serial killer called Neptune begins kidnapping women. He leaves their severed hands on the police department steps and, five days later, displays their bodies around town. Just when Reggie needs her mother, Vera, the most, Vera’s hand is found on the steps. But after five days, there’s no body and Neptune disappears. Now, 25 years later, Reggie is a successful architect who has left her hometown and the horrific memories of that summer behind. But when she gets a call revealing that her mother has been found alive, Reggie must confront the ghosts of her past and find Neptune before he kills again.

What listeners say about The One I Left Behind

Completely Sucked Me In!!!

What made the experience of listening to The One I Left Behind the most enjoyable?

This story is told both in the present and the past so you get all the details. It sucked me in and I was hooked. I listened to it in 2 days. Really kept me on the edge of my seat wanting to solve the mystery.

What other book might you compare The One I Left Behind to and why?

I guess I would compare this to Shiloh Walker's Ash Trilogy because both have a serial killer that is killing women in a town that doesn't have crime. And both keep you changing your mind about who you think the killer is.

Have you listened to any of Julia Whelan’s other performances before? How does this one compare?

The narrator did a good job. I don't think I've listened to anything else she has narrated to compare but she fit this story well. I can say I wasn't a big fan of the voice she used for the girls mother, Vera, other than that I liked how she narrated this book.

I couldn't stop listening until I knew what had actually happend!

Definitely worth the credit. I will recommend this to my friends. If you like mystery/suspense (with no real romance) you'll enjoy this.

This came up in my recommendations, and I'm glad I gave it a shot. The author alternates between 2010 and 1985, telling the story of architect Regina "Reggie" Dufrane and her flaky mom, Vera. Vera's a washed-up former model who asks everyone she meets if they knew she was the Aphrodite Cold Cream girl.

In 1985, Vera disappears, taken by a serial killer. Her body never turns up, though...at least not for a while.

The alternation between timelines adds to the suspense. It's hard to guess what's going to happen next, no matter which year you're in! I have to admit it didn't keep me guessing all the way until the end--but I was still in the dark for much longer than I would have been with a typical mystery.

Going back and forth was also the source of my main issue with the book: some of the characters came out a bit cardboardish. It seemed that with their timelines split, none of them had the chance to become whole. That feeling carried over to a few characters who existed only in one of the years, too. It felt like they just didn't get enough page time to fully develop.

Still, the problem was small in a story that moved so fast, taking so many interesting twists and turns. The ending did not disappoint. And I can't say enough about the narration, expertly provided by Julia Whelan who did such a fabulous job on "Gone Girl."

Recommended for anyone who enjoys a good, creepy serial killer yarn!

ONLY mystery is why many others liked this book!

This was a depressing, dreary story. Think of a rainy, gloomy day and this would describe this book. There was absolutely nothing which was dramatic or suspenseful at all. Every character was made to be flawed, unlikeable and unrelateable. The story kept flipping from past to present and at times, it took a bit to know which was being read. I particularly didn't like the self mutilation cutting - it was almost glorified - which it definitely is not. The whole premise of the book just didn't sit right.... without giving a spoiler, the 'one I left behind' should have just gone to the police!! By the end, I could care less who lived, who died and who the murderer was (and why). My recommendation would be to skip this book and LEAVE IT BEHIND!!

Would you try another book from Jennifer McMahon and/or Julia Whelan?

Julia Whelan is awesome, that is why I chose this book since she was the narrator.

What could Jennifer McMahon have done to make this a more enjoyable book for you?

Couldn't Stop Listening ~ Sucked Me In!!!

I really liked how the author told the story, alternating between 1985, 2010 and excerpts from the fictional book within the book about the case. Doing it this way not only added suspense to the story but wonderful background, clues and was a great way to tell us important info in a creative way. There are a lot of sub plots as well which were very entertaining. She also describes scenes in a way that is realistic and easy to visualize. Great story, great ending.

What does Julia Whelan bring to the story that you wouldn’t experience if you just read the book?

I actually bought this book BECAUSE Julia narrated it. I clicked on her name to see what else she has done after I heard her in Gone Girl. I think I'll keep selecting books this way. Not only did she go to college in my hometown (side note) :) but she has an amazing ability to capture any character with a different voice no matter if they are old, young, male or female. It's all believable. Her natural voice as a narrator is confident, has an excellent cadence and very easy to listen to. It never sounds like it's the first time she's reading the book (unlike other narrators).

YES! I listen to books in the car during my commute. With this book I found myself listening at home with headphones during any free moment!

The narration makes this book

I really liked this book. When I read the synopsis it sounded intriguing and the story was very well written and even better told. Jennifer McMahon lets you get to know the players and writes in a way that you can do that without getting bogged down. Julia Whelan does an exceptional job bringing all those characters to life with her fantastic performance, I didn't even cringe that much when she portrayed the male voices. So she made this for me. Think I might have bent the other way if someone else had read it. Its a good listen. Not a disappointment.

Could not get through it

Perhaps this is my fault, but I could not get past the pathos. The characters leave such incredibly depressing lives (the ones who didn't have it that bad felt that they did)...and, quite frankly, I did not feel that McMahon was going to make the ending worthwhile. There were too many implausible "twists" already. Too many relationships that simply did not add up. A better listener might have struggled on and gotten to the ending that other reviewers are praising, I couldn't. Listened to about two thirds of the book and gave up.

Overall another great mystery by McMahon

I loved this book! I am a huge true crime fan, and it really felt like this was a true crime novel. I had to remind myself that Vera and Reggie weren't real people! Some of supporting characters were never fully fleshed out, but overall the story was just fascinating!

Excellent narration as usual and one of my favorite new authors! Do yourself a favor if you like mystery, suspense, true crime or just a good old fashioned yarn, you will like this book...maybe love it!

Intricate but I was bored

This was a nicely woven story with all the makings of a dark mystery. For me though, the author didn't delve into the real heart of darkness I feel the story required, especially given the rich material in the relationships between girls and their mothers. So much rich potential there yet emotionally, motivationally it all fell flat. Too often if felt Nancy Drew meets Judy Blume and even then it felt very surface. Seemed McMahon was reaching for something deeper with the different subject matter but didn't get there. I liked Whelan's narration in other audible books but here her 'voices' went sideways sounding more like cartoonish mimicry when not reading the part of the main character and there are a lot of different characters in this. I only finished it because I bought it, but from about a third of the way in, the ending was no surprise. I wish I could be kinder with this review.

It is rare that I don't have the villian all figured out by 2/3 of the way thru the book. But this story is so well written and I didn't have it figured out until the author wanted us to know. I love the way the story jumps from Reggie's childhood to adulthood to tell the story. I highly recommend this story to anyone who loves a good mystery. But beware, there is some cursing in the book. But not enough to turn an average reader off.