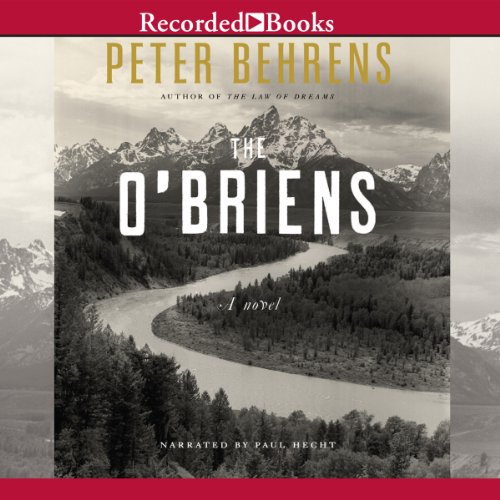 Peter Behrens' eagerly awaited second novel is The O’Briens. In the character of Joe O’Brien - ambitious railroad magnate and industrialist, fiercely loyal family man, brooding troubled soul - he gives us one of the most compelling and complex characters to come along in years. A brilliant follow-up to The Law of Dreams, and yet standing masterfully on its own, The O’Briens is a tragic, romantic, and ultimately hopeful epic of great heart, imagination and narrative force.

I loved this story about a family's struggle to succeed in a new world , all too human, with love prevailing thru heartbreak. Mostly, I went to bed with it every night set on a timer and never failed to have a good night's sleep.

I am still reading this book but I am so sorry I got it as an audio book as I don't like the reader. He does not enunciate "she," it sounds like "he" and it's very confusing when you think one character is being discussed only to hear "he" instead of "she" and you can't turn back the pages to see if you missed something. I will be sure to remember this reader, Paul Hecht, to make sure I don't get another book he has read.

Not much to this one

What would have made The O'Briens better?

There just wasn't much to the story. My wife liked it okay but wasn't wowed by it. I, on the other hand, kept waiting for something interesting to happen or some character in the book to make me like them. Maybe had the author focused more on fewer characters he might have been able to create more interest.

Would you ever listen to anything by Peter Behrens again?

I'm not at all sure. I am hesitant to say that I would never listen to a book by a particular author after just one try. But if The O'Briens is typical of Berhens books, then I would not be very likely to listen to another one.

It could have been good. The sweep of time covered, the interesting locales, the memorable events portrayed all were redeeming qualities. The problem is that Behrens did so little with them.

A Family Saga of Three Generations

The O'Briens is a family saga that extends from 1887 through 1960 covering three generations of the O'Brien family. As the novel starts, Joe O'Brien is a second generation Irishman living in rural Canada with his mother and drunken stepfather. Joe has served as a parental child since his earliest years, taking care of his siblings due to his mother's fragile state of health and his desire to keep his brothers and sisters protected from his stepfather. At one point, when he finds out that his stepfather has been acting inappropriately with his sisters, he nearly kills him.

Joe is the patriarch of the family throughout this novel. "He knew how to hold himself within himself. A fellow needed a good hard shell to survive." Joe has this shell along with the desire to better himself. He wants power, money and a well-bred wife. His first chore is to see that his siblings are taken care of. He sees that one of his brothers is enrolled at Fordham to become a priest, his two sisters enter a convent to prepare for the nunnery, and his other brother travels west.

Joe has grown up on the railroads and he knows how the system works. He wants to become a railroad magnate and by the time he's in his early twenties, he has succeeded. He now only needs a wife. "A house was just a house. He had a railroad, mountains. He was making something of himself." "Alone was no good". He meets Iseult, a young woman of independent means and quite spirited. They begin a passionate and lifelong ambivalent relationship, marrying a few months after meeting. Iseult is searching for herself but also also wants family and children.

Gradually, Joe's business increases to the point that he becomes very rich. His prime interest is his business. "All that mattered to him was getting the work completed and on schedule. It didn't matter who survived or who didn't." He runs into some problems with unions but he prevails. Iseult, in her existential angst, thinks of Joe, her husband as the man who once "promised life, connection, children, meaning. But really, people were alone. Even in marriage - perhaps most of all in marriage - they were alone.

Joe and Iseult have four children, three daughters and a son. One of the daughters dies after living only two days. The O'Briens have homes in Canada, Santa Barbara, and Maine. Joe owns land up and down the west coast. As the book propels towards World War II, the children grow up and the war plays a large part in the novel.

One of the problems with this novel, and it is a good novel, is that it is just too short at 386 pages to cover so much time and inform the reader about all of the family members. The reader becomes very familiar with Joe, Iseult, Joe's borther Grattan, and the first generation to some extent. However, the grandchildren are just glossed over.

One of the most poignant parts of the novel are Joe's alcohol binges that nearly bring the marriage to an end. Every so often, Joe leaves his home and goes to New York City where he takes a room at some luxury hotel. There he stays and drinks for days until Iseult is called and asked to pick Joe up. At one point, Iseult leaves Joe and takes the children to Santa Barbara where she and Joe remain separated for nearly a year. Joe continues to binge but it is never discussed between them again.

Another very significant aspect of this novel is the acknowledgement of post-traumatic stress disorder although it is never given a name. Grattan returns from World War I a changed man, virtually crazy and wild. He has been in the trenches but he does not speak of what he has experienced. A similar situation occurs with Joe and Iseult's son Mike after he returns injured from World War II. He has lost his health, his love and his grounding in the world.

Iseult's ambivalence about Joe occurs throughout their marriage. She states that Joe "had occupied her life like a foreign army. But was that really true? Wasn't it just as true that they has created a life together?" Joe, on the other hand, has implacable faith in himself to the point of narcissism. He takes it for granted that his life with Iseult is a necessity and that he needs her to make a home. "Selfish, Frankie thought. Hard-hearted. Her mother needed him, but he as usual was thinking of no one but himself."

The saga is quite interesting but at times I felt like I was just skimming the surface. The depths were too deep and too many to touch in this too short a book. Perhaps if it were 800 pages, the characters could have been more fleshed out. Another possibility would have been to limit the novel to just two generations and leave the third one out. Personally, I would have liked this to have been two books.

If you could sum up The O'Briens in three words, what would they be?

Would you be willing to try another one of Paul Hecht???s performances?

I found his habit of dropping "s's" irritating and confusing - especially with the word"she".