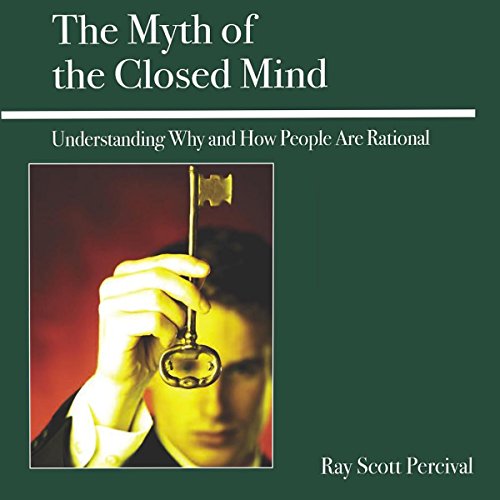 The Myth of the Closed Mind

Understanding Why and How People Are Rational
By: Ray Scott Percival
Narrated by: Timothy W. Bader
Length: 13 hrs and 1 min
Categories: Science & Technology, Psychology & The Mind

The Myth of the Closed Mind

"It's like talking to a brick wall" and "We'll have to agree to disagree" are popular sayings referring to the frustrating experience of discussing issues with people who seem to be beyond the reach of argument. It's often claimed that some people - fundamentalists or fanatics - are indeed sealed off from rational criticism. And every month new pop psychology books appear, describing the dumb ways ordinary people make decisions, as revealed by psychological experiments. The conclusion is that all or most people are fundamentally irrational. Ray Scott Percival sets out to demolish the whole notion of the closed mind and of human irrationality. A key aspect of Percival's approach is to identify "the persuader's predicament", the situational logic of the propagandist. Percival contends that a propagandist is faced with a trade-off between his message being closed to criticism and the message reaching and converting as many people as possible. It is possible to make a belief system more closed to criticism, but only by limiting the wide dissemination of the system. Percival illustrates the way belief systems adapt to criticism by an examination of two ideologies, Marxism and Freudianism, and by various examples drawn from the history of religion.

The book is published by Open Court.

"At last, a 21st century philosopher willing to stand up and argue for the power of sheer human rationality." (Paul Levinson, author of New New Media)
"If he were henceforth to write nothing else, Professor Percival has his classic." (JC Lester, author of Escape from Leviathan)
"His arguments are both ingenious and entertaining - and often point to unresolved issues in the theory of rationality." (James Fetzer, author of The Evolution of Intelligence and Render unto Darwin)