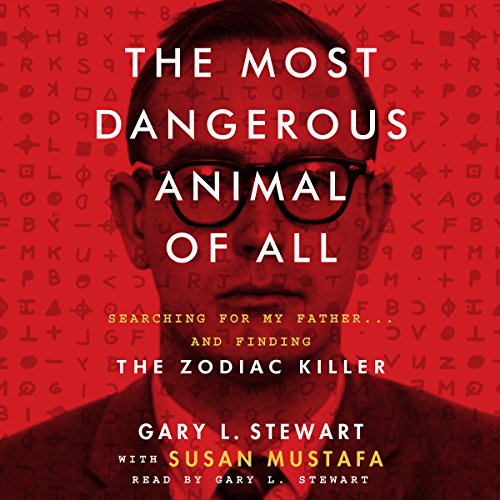 The Most Dangerous Animal of All

Soon after his birthmother contacted him for the first time at the age of thirty-nine, adoptee Gary L. Stewart decided to search for his biological father. His quest would lead him to a horrifying truth and force him to reconsider everything he thought he knew about himself and his world.

Written with award-winning author and journalist Susan Mustafa, The Most Dangerous Animal of All tells the story of Stewart’s decade-long hunt. While combing through government records and news reports and tracking down relatives and friends, Stewart turns up a host of clues—including forensic evidence—that conclusively identify his father as the Zodiac Killer, one of the most notorious and elusive serial murderers in history.

For decades, the Zodiac Killer has captivated America’s imagination. His ability to evade capture while taunting authorities made him infamous. The vicious specificity of his crimes terrified Californians before the Manson murders and after, and shocked a culture enamored with the ideals of the dawning Age of Aquarius. To this day, his ciphers have baffled detectives and amateur sleuths, and his identity remains one of the twentieth century’s great unsolved mysteries.

The Most Dangerous Animal of All reveals the name of the Zodiac for the very first time. Mustafa and Stewart construct a chilling psychological profile of Stewart’s father: as a boy with disturbing fixations, a frustrated intellectual with pretensions to high culture, and an inappropriate suitor and then jilted lover unable to process his rage. At last, all the questions that have surrounded the case for almost fifty years are answered in this riveting narrative. The result is a singular work of true crime at its finest—a compelling, unbelievable true story told with the pacing of a page-turning novel—as well as a sensational and powerful memoir.

What listeners say about The Most Dangerous Animal of All

Only listen if you don't mind pure fiction

Just about all of the evidence presented in this book has been debunked or proven to be fabricated. The co-author has distanced herself from the book.

If you could sum up The Most Dangerous Animal of All in three words, what would they be?

I thought this book was amazing. I loved the dry yet emotional voice of Gary, as he went over the story and facts. I got completely hooked and was fascinated the entire way through. I'd read about the Zodiac years ago and saw the Hollywood movie. This is by far the most convincing story I've heard.

very religious. not to my taste

the author talks about his grandfather's morality, equating religion and military service with goodness, all the while reporting that the same man believed in spare the rod, spoil the child, and that holding and being loving toward his son would cause him to be a"sissy." if in fact the author's father was the zodiac, it's no wonder, being raised like that. very simplistic and preachy, and a true conflation of the outward appearance of conformity with actual moral character. ugh

An interesting story, a bit laborious at times. Mostly it is a story of one man's dogged determination of personal discovery. Is Gary Stewarts' father really the Zodiac killer? Maybe.

Few authors ought to read their own books, with few notable exceptions, and honestly in the beginning Gary's reading annoying. But after awhile Gary's reading grew on me.

This is a deeply personal story and he conveys as much emotion with tone as does the words. By the end, I rather liked the addition.

Zodiac behind Big Blue Wall; the IRONY of it all

I found the book compelling, not only for revelations about the identity of the Zodiac, but for the interplay of SF politics on a murder investigation and later, a coverup. I think the author has nailed it, when I consider the credibility of the presenter and the publisher (HarperCollins), the support of a qualified handwriting expert of a definitive forensic handwriting match of a few documents written and signed by Van Earl Best, Jr. and those written by the Zodiac, Best's name is embedded in two (2) of the Zodiac ciphers, the fact that both the Zodiac and VE Best, Jr. had identical scars on the same index finger. The motive, means and opportunity also support the finding but aren't needed. The only thing missing for a slamdunk beyond a reasonable doubt finding is DNA. And, Mr. Stewart and his biological mother have offered DNA to an expert who now has the markers to match to the DNA of the Zodiac.

BUT, the Blue Wall of the SF Police Dept stalled it all and closed the investigation in 2004, the week the author began making inquiries for the Best file. Above all else, they must protect their own: a black police detective who married the Zodiac's former wife (the author's biological mother) and who was somewhat of a bit player in the whole investigation behind Toschi and Armstrong.

To hell with the public's interest and the families of the victims.

This book and the author's narration made me want to continue listening.

Can I find something to criticize? Yes. Some of the investigation part repeats what was already in the life story of Van Earl Best, Jr. and I thought there was much too lengthy a discussion of the relationship between the bio mother and her husband Rotea (the detective), presumably to bend over backward to appear that no one is pointing the finger at him.

I just hope to hell this puts continued pressure on the higher-ups in the SFPD to get off their ASS and stop looking out for numero uno!

Would you listen to The Most Dangerous Animal of All again? Why?

I am re-listening to the book already after just finishing it.

The compelling story and evidence.

I just finished the audio version of Gary’s and Susan’s book. They did a fantastic job of telling Gary’s life and research. The evidence is extremely compelling. Please seriously consider buying this book for your library as it will undoubtedly not only become a game changer of this long-standing mystery but a template of how to honestly research and present such important revelations. Kudos to the authors and for Gary to publicly reveal these difficult, personal truths.

Interesting take on the Zodiac Killer

Would you listen to The Most Dangerous Animal of All again? Why?

This isn't so much a tale about the Zodiac as it is about a man trying desperately to find his real father. He does make a compelling case that his father was the Zodiac, but it almost seems like he has become so invested in the chase, he needs it to be true. I think this book would be interesting even if it weren't about the Zodiac - the story of this guy's parents is nuts! There's a lot of self-reflection and the book drags in some places - I wouldn't read it again, but I do suggest it as an interesting book about adoption, birth parents, etc.

The Argument is Very Intriguing.

Yes - the ones that are into this type of thing. It's a very interesting look into a mystery that will probably never get solved.

For some reason, the scene where Earl and Judy are at the pool at the Hotel Corinto in Mexico City. All the onlookers are wondering why this man is with a young teenager. It just struck me as the epitome of this guy's depravity in a scene that was pretty innocuous.

More of a personal story....

Great personal story of an abandoned child's search for his biological family. The evidence and motive presented that his father was the Zodiac, though interesting, was not overly convincing.

This is really more of a story of self-discovery than it is an investigation. The story begins when a very ordinary everyman in his early middle age is contacted by his birth mother for the first time in his life. This starts the narrator down the road of tracing his roots and learning where he came from. A majority of the book is spent retelling the story of his father's life, as the narrator had pieced it together. His father, Earl Van Best Jr. (there's your first clue, so many serial killers go by their middle name), has a story that is itself very eccentric and weird. In a bizarre way, it kinda reminded me of Forrest Gump because you see an unknowing character weave through the modern history we in the present are all familiar with (and there are a surprising number of big, recognizable people whose lives intercepted Earl Van Best Jr.). There were also a bunch of odd diversions from the story. The author spends time discussing other crime events in 70's California (Charles Manson family, the zebra murders, the "Black Doodler") and the backstory of some inconsequential characters. The suspect does have the odd tertiary connection or two to some of those crimes and I didn't quite mind reading about them, but they seemed like odd things to include. I am fascinated with the Zodiac case, so I was a little impatient for the author to get to the actual Zodiac case. It seems I'm not alone in this respect; most of the 1 star reviews on here are from people upset with how long it took to get to the crimes and/or skipped ahead. However, this story soon had me hooked. Regardless of any final verdict, Earl Van Best was a disturbed and morbidly fascinating individual.

Now, as for the evidence...
Stewart peppers in a handful of interesting details as he recounts his father's life that will jump out to people familiar with the Zodiac case. At some point the story morphs into speculation though, where he just portrays the Zodiac Killer as his father. Granted, he has done such a good job at painting a portrait of his father as a sociopath, that it doesn't feel like a huge leap in logic at the time. It isn't until the book's final third where it follows the author connecting the dots. Almost all of the evidence is circumstantial, but it is compelling. Then it isn't until the very, very end when the author starts to come up with some real evidence (handwriting analysis, fingerprints, possible cipher solutions). The author basically says his inquiries were stonewalled by the San Francisco Police Department, so it ends on a bit of a question mark.

If you follow the book, he makes a case that can be very convincing. But, it should be noted, that he isn't the first person to come forward with a good argument on who Zodiac is (he's not even the first to make the case that they were the son of the Zodiac, not even the second or third actually...). The cipher solutions are interesting, for sure, but the degree in certainty he has in his answer seems a bit much. There are enough symbols and potential permutations in the cipher to see whatever you want.

Overall, the book is very compelling and worth reading, but be aware that it is mostly a personal narrative. If you just want to read a thorough investigation into Zodiac in obsessive detail, read Robert Graysmith's book "Zodiac" if you haven't yet. It became the basis for the excellent 2007 David Fincher movie of the same name. Either way, this book would make a great pairing to read after Graysmith's.