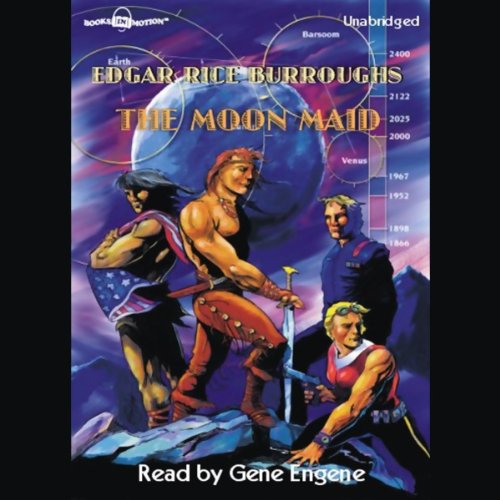 In the late 20th century, Admiral Julian 3rd can get no rest, for he knows his future. He will be reborn as his grandson in the next century to journey through space and make an ominous discovery inside the moon; he will live again in the dark years of the 22nd century as Julian 9th, who refuses to bow down to the victorious Moon Men; and as Julian 20th, the fierce Red Hawk, he will lead humanity's final battle against the alien invaders in the 25th century.

The Moon Maid is Edgar Rice Burroughs's stunning epic of a world conquered by alien invaders from the moon and of the hero Julian, who champions Earth's struggle for freedom, peace, and dignity.

What made the experience of listening to The Moon Maid the most enjoyable?

Totally in line with what's happening to our country today. Only this author wrote fiction.

All about how the world reverted back a few hundred years.

Which character – as performed by Rebecca Rogers – was your favorite?

From beginning to end.

The moon maid...and another 2 centuries.

The story was a lot longer than necessary. Also, if you’re looking for a continuation of the Mars series by Edgar Rice Burroughs, you’re going to be out of luck here. Barsoom is mentioned many times, but only in passing and Julian 9th is no John Carter. The narrator does a good job reading the story but, as I said, the story just keeps going and going. Not my favorite, but certainly better than most sordid sex novels published these days. The futuristic and interplanetary imaginings of Burroughs are creative and engaging to open-minded readers. If you like futuristic dystopia as well as steampunk science fiction, you’ve come to the right place. Not quite Jules Verne, but definitely in the same genre.

Very boring,it spends to much time explaining things, waste of $$$$$$$$$$ and I am a burrough fan.