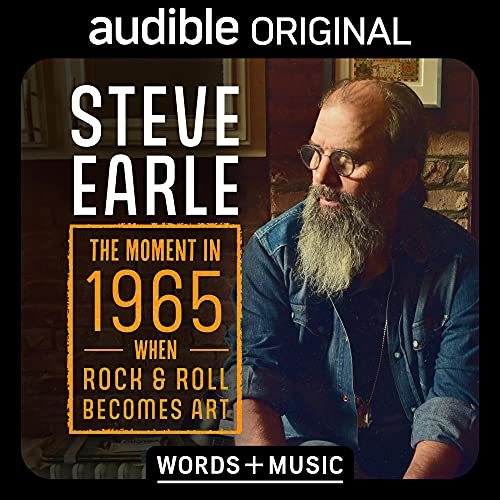 “This is a story about an idea that I have,” Americana legend and self-proclaimed “recovering folk singer” Steve Earle states early in his enthralling Words + Music performance. “This job of mine becomes an artform spontaneously in 1965 - when Bob Dylan wants to be John Lennon, and John Lennon wants to be Bob Dylan, whether either one of them would admit it or not - and in that moment, rock and roll becomes art."

Recorded in 2021 at Jimi Hendrix’s Electric Lady Studios in Greenwich Village, New York City, listen to the gravelly voiced consummate storyteller speak and sing from his beloved, adopted neighborhood - the birthplace of a musical revolution. Hear this rambling man map his personal journey through bluegrass, country, folk, and rock and roll alongside new recordings of Steve Earle favorites and never-heard-before renditions of songs by Bob Dylan, The Beatles, and more. Of himself and his heroic influences, he says, “We weren’t there to write hits, though a few of us accidentally did. We were there to create art.”

Steve Earle is one of the most acclaimed singer-songwriters of his generation. A protégé of legendary songwriters Townes Van Zandt and Guy Clark, he quickly became a master storyteller in his own right, with his songs being recorded by Johnny Cash, Waylon Jennings, Joan Baez, Emmylou Harris, The Pretenders, and countless others. In 1986, his record Guitar Town was released and shot to number one on the country charts. It’s now regarded as a classic of the Americana genre. Subsequent releases, like The Revolution Starts...Now (2004), Washington Square Serenade (2007), and TOWNES (2009), received consecutive Grammy Awards. Restlessly creative across artistic disciplines, Earle has published both a novel (I’ll Never Get Out of This World Alive) and a collection of short stories (Doghouse Roses); produced albums for other artists, such as Joan Baez and Lucinda Williams, and acted in films, television (including David Simon’s acclaimed The Wire), and on the stage. He currently hosts a radio show for Sirius XM. In 2009, Earle appeared in the off-Broadway play Samara, for which he also wrote a score that The New York Times described as "exquisitely subliminal." Earle wrote music for and appeared in Coal Country, a riveting public theater play that dives into the most-deadly mining disaster in US history, for which he was nominated for a Drama Desk Award. His 2020 album Ghosts of West Virginia was named as one of "The 50 Best Albums of 2020 So Far" by Rolling Stone. Earle was recently (November 2020) inducted into the Nashville Songwriters Hall of Fame, and released his 21st studio album, J.T., in 2021 as a tribute to his late son, Justin Townes Earle.
.
ORIGINALS

Extremely well presented. My husband and I always enjoy listening to Steve Earle , whether it be on Satellite Radio ; a CD; or TV. This presentation was enlightening about Steve’s life , as well as, rock n roll. We both grew up in the 60’s and learning the history of music as art , was interesting and entertaining. Thank you Steve and thank you Audible.

Steve Earle is dead-on in his recollection of the times...what an incredible period of music. Loved the last song Earle plays...kind of a Subterranean Homesick Blues vibe with Earle’s own spin on lyrics...very cool.

I first learned of Steve Eagle through his novel about Hank Williams' ghost, "I'll Never Get Out of this World Alive". For me, he's an easy guy to envy. Song Writer, fiction writer (probably non fiction, too [Duh! This Audible Original]), and all around story teller.
This autobiographical memoir about his musical development through folk, country, and rock-and-roll influences is a trip through music Americana in the 60's by a Texan/Southern good ol' boy. Reminds me of my youth since he's just a few years older than I am. Recommended, especially if you were born in the mid-50's. A Jack Kerouac type memoir.

Discovered Steve Earle the same way I discovered Dylan by hearing Joan Baez sing one of his songs at a concert, “Christmas Time in Washington.” Checked him out when I went home and have been a fan ever since.

Here Steve pulls together a popular music thread or two to make the case for a convergence of Dylan and Lennon that’s more than them meeting in a hotel room and Lennon copycatting Dylan’s hat. His lovely performance of “Norwegian Wood” seals the deal.

Still, I found myself wanting more. A strengthening of his main point. As this story’s told through an autobiographical lens, maybe Steve will take a flat in Liverpool and we can have more of the other side of the pond’s perspective. Let’s hope so, this was a great listen.

Painful, first time I have ever had to stop and mark as finished.

Between the “Sling-blade” throat clearing and liberal agenda undertones it was painful to listen to.

I could listen to Steve Earle tell stories for days. His ability to craft a compelling narrative makes his banter as interesting as his music, and that comes across here in spades. I only wish I could hear more.

I apologize for not knowing better, but I had no idea that Steve Earle was so 'in the know' about many things musical and not so musical. He is a very smart person and I enjoyed listening to his podcast. Thank you Steve. Good job!

Was there a point to this?

If you want to listen to smokers destroyed voice talk about nothing, then maybe it is for you.

worst words and music I've listened to yet.

worst words and music I've listened to yet. title makes.no sense doesn't even expand on it. starts with his life story ok tell that not some irrelevant title that doesn't even connect. then ended with American history that isn't even accurate or is out of context and missing key facts.

Steve Earle does an awesome job of reminiscing about the early days of rock and roll with an emphasis on folk music. His guitar playing and singing are nicely done with a lot of charm and character. It’s easy sitting back and getting lost in his gravelly voice and at times he’s picking a tune while relating a story that makes you want to dance. This is a recording I can easily listen to many times. Beware though, the language is adult, but that’s just his honesty, which for me was a welcome experience.