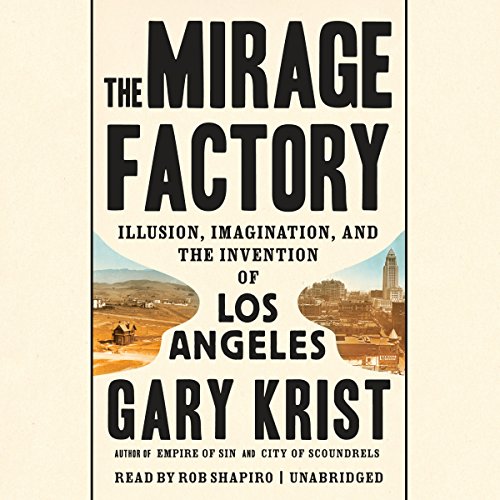 From best-selling author Gary Krist, the story of the metropolis that never should have been and the visionaries who dreamed it into reality

Little more than a century ago, the southern coast of California - bone-dry, harbor-less, isolated by deserts and mountain ranges - seemed destined to remain scrappy farmland. Then, as if overnight, one of the world’s iconic cities emerged. At the heart of Los Angeles’ meteoric rise were three flawed visionaries. William Mulholland, an immigrant ditch-digger turned self-taught engineer, designed the massive aqueduct that would make urban life here possible. D.W. Griffith, who transformed the motion picture from a vaudeville-house novelty into a cornerstone of American culture, gave LA its signature industry. And Aimee Semple McPherson, a charismatic evangelist who founded a religion, cemented the city’s identity as a center for spiritual exploration.

All were masters of their craft, but also illusionists, of a kind. The images they conjured up - of a blossoming city in the desert, of a factory of celluloid dreamworks, of a community of seekers finding personal salvation under the California sun - were like mirages liable to evaporate on closer inspection. All three would pay a steep price to realize these dreams, in a crescendo of hubris, scandal, and catastrophic failure of design that threatened to topple each of their personal empires. Yet when the dust settled, the mirage that was LA remained.

Spanning the years from 1900 to 1930, The Mirage Factory is the enthralling tale of an improbable city and the people who willed it into existence by pushing the limits of human engineering and imagination.

“[Krist’s] dramatic portrayals of politics, scandals, sabotage, and bombings make for a rich, rewarding read.... An entertaining, intertwined tale of triumph, hubris, and Manifest Destiny in the city of angels.” (Kirkus)

"[Krist] marshals his considerable storytelling skills to capture Los Angeles at a critical moment...expertly weav[ing] together the stories of Griffith, Mulholland and McPherson.... But above all Krist is a nimble scene-setter, and it's the indelible details he offers that give The Mirage Factory its mesmerizing pull." (The New York Times)

"As a writer, Krist is a dream-weaver...exquisite pacing and seamless shifting between the characters allow their stories to connect.... I've read dozens of histories of the Los Angeles Aqueduct, and none are as viscerally compelling or as clear in detailed descriptions of the complicated machinations as Krist's account.... Krist's book is so good that, like the best movies, it ends up inverting the genre." (The Washington Post)

What listeners say about The Mirage Factory

Must read for any Los Angeleno

The history of Los Angeles is told in this book through the lives of three larger than life characters. William Mulholland, D.W. Griffith and Aimee Semple McPherson, who helped made the city what it is. One of the great books of all time that tells the Mulholland story is Cadillac Desert by the late Marc Reiser. This audiobook tells the creation story of Los Angeles through the lives of Mulholland, Griffith and Aimee Semple McPherson, the tireless, and widely popular (at the time) Canadian-American Pentecostal evangelist who, Krist argues, gave birth to the spiritual side of the city, helping create the notion of LA as a place of spiritual awakening and fulfillment. The audiobook is an easy listen, the narrator has a very even but charismatic voice. The audiobook is strewn with fascinating details about how Los Angeles grew from the 35th largest city in the early 20th century to the second largest by the 1950s. It's a really interesting and enjoyable listen. Highly recommended.

The Mirage Factory grabbed my attention from the beginning with its discussion of the battle to bring water to L.A. It then segued to the nascent film industry of silent films in the Eastern U.S. and it’s speedy move to L.A. I found this all very informative and interesting. But when the author introduced Aimee Semple McPerson I felt the book came apart. Her bizarre story, though apparently important around the 1920s, might interest evangelicals but not me. It sounded like a fantasy story with too much detail. I wish the book stuck with water and film beyond the 1930s.

great story of the history of L.A.

Great narrative of the history of L.A. 3 stories intertwined together I thought it was only going to be Mulholland back story but three peoples story, The Artist, Evangelist, and the engineer

Way more interesting than I expected.

I found this book absolutely engaging and fascinating from beginning to end. Even though I have lived in Los Angeles for over 20 years and knew the names of the book’s major players, The Mirage Factory provided not just a detailed history of the city, but also the reasons why LA is unique among American cities. By using the framework built on three remarkable individuals, the book becomes personal, yet is still able to provide a broad view of LA’s dramatic growth. Well worth listening to.

My favorite listen on Audible...and I've listened to hundreds of books. I first got the book anticipating a nice diversionary listen to all the "serious and melodramatic" news that's been occurring the past year, and what I ended up with was an incredibly interesting book into the history of Los Angeles, film, and so much more. I listened to books as I walk, and I literally went from 3,000 daily steps to nearly 20,000. I couldn't stop listening.

The author wove a number of different but compelling stories into superb book. And certainly, the narrator, Rob Shapiro could not have been better. So good in fact that after I finish writing this review I'll search out other books he has narrated.

If you love a great story and/or have an interest in Los Angeles history, including it's founding, film and movie industry, water issues, this is the book to read. Heck, You really don't need to be interested in any of that but rather just love a well written, super interesting, and amazingly narrated book, this is it.

Great content and a narrator that kept it interesting and flowing. Early L. A. info

I enjoyed listening to this history of early Los Angeles in a recent trip to the city from my home in San Diego. It was on the 10 best books of 2018. It tells the story of three factors into its growth into America's second largest city: water, movies, and spiritual fundamentalism. Great read.

A great story about history

This book was pieced together so well it flowed from one topic to another. The research done to write this book was staggering. I really like the fact the story was told only on documented facts, no added impressions or guesses.

Superbly written and narrated. You will love it. Hands down, favorite book of the year.

Story was good. I had no interest in the evangelist story. The film part was good it goes deep. Maybe to historical on the surface. Overall a good listen.