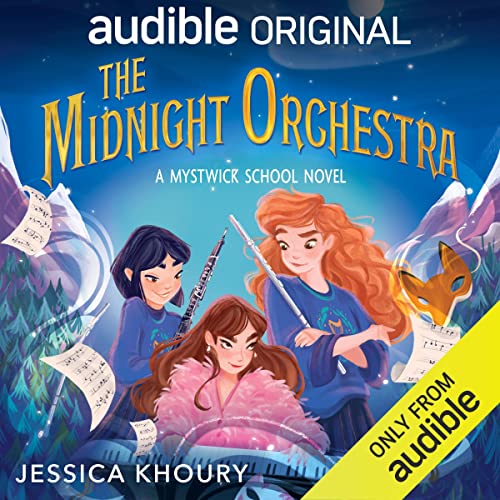 By: Jessica Khoury
Narrated by: Suzy Jackson
Try for $0.00

In this spellbinding sequel to The Mystwick School of Musicraft bursting with music and mystery, Amelia must master the magic of Composing to help her school win a magic competition - and save her friends from a mysterious evil.

Things are finally looking up for Amelia Jones: She's officially a Mystwick student, and she even has a teacher to help her learn how to use her rare Composing magic. When Mystwick enters an international magic competition, it’s Amelia's chance to Compose something that will help them win the day. The only problem is that she still doesn’t understand how her powers work. But then she hears about a super exclusive Midnight Orchestra - half performance, half magical black market - and Amelia is sure that’s where she’ll find the answer to her Composing problem.

But the Midnight Orchestra is far more sinister than it initially appears, and if Amelia can’t unlock her Composing powers, not only will Mystwick lose the musicraft competition, she won’t be able to rescue her friends from the danger unleashed in this thrilling adventure.

Jessica Khoury is the author of over a dozen books for young readers, including the Mystwick School of Musicraft and the Skyborn series. In addition to writing, she is an artistic mapmaker and spends far too much time scribbling tiny mountains and trees for fictional worlds. Her spare hours are spent video gaming, painting, or cooking badly. She lives in Greenville, South Carolina, with her husband, daughters, and sassy husky Katara.

Suzy Jackson is an actress and voice-over artist whose voice has been heard on numerous audio books, commercials, video games, and cartoons. Jackson won the AudioFile Earphones Award for Young Adult audiobooks in 2019. She is an Audie Award winner and SOVAS Voice Arts Award nominee. Her books have been recognized on the American Library Association’s Amazing Audiobooks for Young Adults list. Jackson is the proud executive director of Opening Act, a nonprofit organization that brings free theater programs to NYC’s most underserved public high schools.

What listeners say about The Midnight Orchestra

I was so excited to see Audible had an early release (it was scheduled for this June) for this!!

Okay, so, first things first- at first, I had more trouble getting into this one than the first, and I say that in case anyone else has the same issue, because you NEED to stick it out. The first few chapters were slow for me, but I kept going, and WOW, I'm so glad I did. I'm sure it won't be the same for everyone, it's all about preference, but just in case you DO find yourself in the same boat as me, PLEASE keep going!

I honestly think that despite the slow start, this one was better than the first. It goes a LITTLE darker than the last one (but still very much suitable for middle-grade readers as far as I can tell), so be aware of that if you're listening with really young kids, but it's definitely for the better! Another thing this book adds is just a little more description of the characters as far as how they look, etc, which is important because it really highlights the diversity this book brings. It was already pretty apparent just based on the characters' names, but a little added detail goes a long way, too!

I said it before and I'll say it again, I really hope this becomes a legitimate ongoing series. Jessica Khoury (the author) really has a gift for writing complex and memorable characters, both good and bad, as well as deep, thought-provoking plots, all in middle-grade book, which is a difficult combination to pull off. I'm hoping for a lot more trips to Mystwick in the future!

The sequel to our favorite music school does not disappoint. With new music, characters, surprising twist and revelations, and the official bad guy for the series you will be glued to your seat listening to the very end.

Exciting continuation of the Musicraft world

I enjoyed the narration, world and music of the first book immensely and the Midnight Orchestra is similarly on a very high level. I was waiting for the book release for months and happy that it's finally out! The story is simple and the twists are predictable, but it's a book for kids so I'll allow it to slip. It has lots of musical pieces performed professionally in the background without ruining the narration, so it was a pleasure to listen. Suzy is one of my favorite narrators and she did a fantastic job with this book with all the characters and their emotions. Highly recommend it, especially as a free listen with Audible Plus!

It was good but for me to intense

Is there anything more to be said?
I mean the rest was amazing!!!
but yah a bit intense.

All the stars must have aligned to create this production. It has a wonderful story, a talented narrator, and evocative background music that is always at the right audio level; this is the highest standard for an audiobook.
This is book 2 of the Mystwick series, so you definitely want to check out the first one. Khoury has already set up so much from the previous installment, yet still quickly sets up four (if not more) points of conflict right in the beginning of the book. Her pacing is impeccable. She never once forgets any of her narrative threads, and weaves them together perfectly. Every chapter took me exactly where I wanted to go in the story, and I didn't even know it.
The author gives enough clues so that you can guess some of the mysteries, but she still got me with some of her twists (which were of course perfectly set up beforehand.) As a reader, I felt like I was in good hands. What an excellent book. Can't wait for the next one.

It’s perfect I recommend it to everyone.
Especially if you liked the first 2 stories
I fond this one the best of the 3

This is such a good book! So many surprises and unexpected twists and turns. 😱 I loved it!