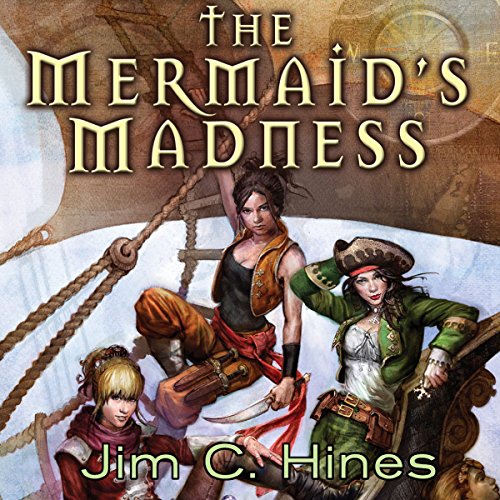 What would happen if a star writer went back to the darker themes of the original fairy tales for plots, and then crossed the Disney princesses with Charlie's Angels? What he'd end up with is The Mermaid's Madness, a whole new take on The Little Mermaid. And with Jim C. Hines penning the tale, you can bet it won't be "They lived happily ever after."

What listeners say about The Mermaid’s Madness

This is an endearing light fantasy series, like a Disney Princess adventure for grown-ups. Although billed as "the darker side of fairy tales," Jim Hines doesn't really get dark-dark, he just takes traditional fairy tales and treats them as stories about adults in a fantasy world.

In "The Stepsister Scheme," we were introduced to Danielle Whiteshore, aka "Cinderella," newly married to Prince Armand and just learning that her mother-in-law Queen Beatrice has a predilection for collecting girls in trouble with unusual gifts. Hence, Snow White and Talia, aka "Sleeping Beauty," both of whom come from their own tragic real-life fairy tales. The three women go forth to rescue Armand from malevolent faeries, and a buddy team-up fantasy series is born.

In book two, the threat is mermaids. Hines adapts the tale of The Little Mermaid this time. Lirea, the mermaid who fell in love with a human prince, has subsequently gone mad, killed her own sister and her father, and has taken over her tribe and is leading the Undines (merfolk) in a war against the humans. Danielle, Snow, and Talia discover trouble brewing on a diplomatic mission to the Undines that goes badly wrong. Lirea is apparently hunting for her surviving younger sister, convinced by the voices in her head that her little sister (and everyone else) is trying to kill her.

Hines is definitely writing in response to, though not in imitation of, the Disney versions we are all familiar with. Lirea is no Ariel (her sister is a little closer), but we do get a Sea Witch, far more complex than the Disney version (first she's evil, then she's not, then she is) and a more complicated version of the "mermaid and her human prince" story (they were in love - no, he was a cad who used and abandoned her - no, he was actually in love with her - they were married - no they weren't). There's also a lot of magic treated with some complexity as well, as the details of what really happened to Lirea, what her grandmother the sea witch is really up to, and how Cinderella, Snow, and Talia will save the day all depends on understanding how certain spells work.

Snow White and Danielle both "level up" a bit in this book, while Talia is still the same butt-kicking ninja she was in the first book, but what she gets more of is character development. We learn a little more about her background — specifically, how she came to the Kingdom of Lorindar and wound up under Queen Bea's protection — and her love for Snow, revealed in the first book, is revealed to more people in this one. I am not sure where Hines will go with this, since so far, Snow seems pretty heterosexual, constantly flirting, and, it's strongly implied, going well beyond flirting, with anything in trousers. I suppose for many fans it would be a "happy ending" if Snow reciprocates Talia's feelings, but an unrequited love seems more likely.

There is a bittersweet happy ending, a twist or two on the traditional ending of the Little Mermaid's tale, and generally things are wrapped up in a satisfying manner while leaving a few dangling threads (like Talia's so-far unrequited love) for the next book.

This isn't brilliant fantasy, but it's very enjoyable fantasy written with a thoroughly modern sensibility — the characters are living in a medieval fantasy world, and somehow they manage to act like enlightened people without outright spouting 21st century viewpoints. The presence of non-straight characters does not come off as gimmicky or an arbitrary checking off of diversity boxes, nor is there any hint of exploitation. And of course, this is a book with multiple strong female characters - in fact, a ton of them - but not all are in the Exceptional Woman Who Is Superior to Any Man mold. The men don't suffer for the formidability of the ladies, though they do tend to be more minor characters.