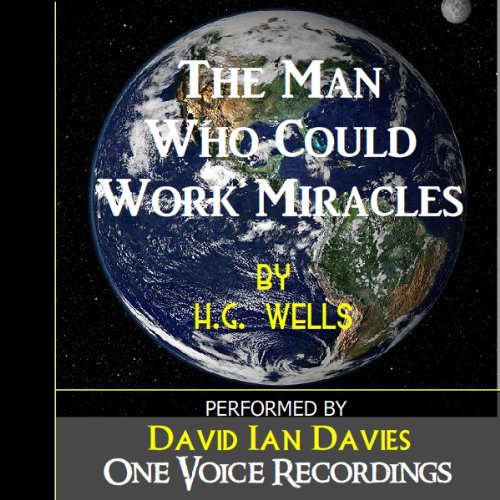 The Man Who Could Work Miracles

After George McWhirter Fotheringay discovers that he is able to perform miracles in a local bar after he professes not to believe in them, he experiments in his home with whimsical results. He seeks the advice of local clergyman, Mr. Maydig, who decides to begin a campaign of using Fotheringay's powers to reform the world. But with best of intentions, Mr. Fotheringay has little knowledge and less foresight. Before long a miracle backfires and he must use his power one last time to undo the cataclysm.
Public Domain (P)2009 One Voice Recordings

What listeners say about The Man Who Could Work Miracles

probably revolutionary in its time

This story may have been the first of its kind, and was probably a new and fantastic thing a hundred years ago; however, since then, it has been done repeatedly--and better. I especially disliked the ending; it's so irrational and idiotic, but I won't spoil it for those who haven't heard it.

I wonder what that nice police constable thought about the trip he got sent on. If you want to know where he was sent, be sure to read this incredible tale of mind-over-matter as told by H.G. Wells, the incredibly gifted author who gave us that wonderful novel, "The Time Machine". And be sure to read his other short stories as well. It should also be noted that David Ian Davies has a wonderful talent for voices.