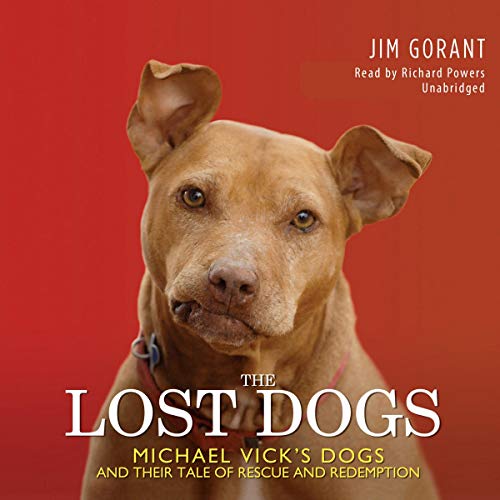 By: Jim Gorant
Narrated by: Richard Powers
Try for $0.00

This is an inspiring story of survival and our powerful bond with man’s best friend in the aftermath of the nation’s most notorious case of animal cruelty.

Animal lovers and sports fans were shocked when the story broke about NFL player Michael Vick’s brutal dogfighting operation. But what became of the dozens of dogs who survived? As acclaimed writer Jim Gorant discovered, their story is the truly newsworthy aspect of this case. Expanding on Gorant’s Sports Illustrated cover story, The Lost Dogs traces the effort to bring Vick to justice and turns the spotlight on these infamous pit bulls, who were saved from euthanasia by an outpouring of public appeals coupled with a court order that Vick pay nearly one million dollars in “restitution” to the dogs.

As an ASPCA-led team evaluated each one. They found a few hardened fighters, but many more lovable, friendly creatures desperate for compassion. In The Lost Dogs, we meet these amazing animals, a number of which are now living in loving homes, while some even work in therapy programs. Johnny Justice participates in Paws for Tales, which lets kids get comfortable with reading aloud by reading to dogs; Leo spends three hours a week with cancer patients and troubled teens.

At the heart of the stories are the rescue workers who transformed the pups from victims of animal cruelty into healing caregivers themselves, unleashing priceless hope.

“Beautifully written and forthright…The Lost Dogs should make some news; not just for animal lovers but for anyone pondering the human propensity for violence and goodness.” (Library Journal)

“You will come away from The Lost Dogs warmed by the knowledge that it wasn't only Vick who got a second chance.” (George Dohrmann, senior editor at Sports Illustrated and author of Play Their Hearts Out)

What listeners say about The Lost Dogs

Such an Important Book I'm Rounding Up

This would be a 3.5-star review because of textual flaws (and almost painful narration), but it's so important it really needs to be heard.
If you're an animal lover, don't worry: while brutal, it's not too terribly graphic, and... well, get a grip. This is what happens. This is why you love them and want to do something for their well-being. This is why you never want to buy a Michael Vick jersey. Seriously, I saw a documentary on him after this was all over, and he seemed so genuinely contrite that I thought, gee, maybe he really got it and regrets his actions (and I'm almost militant when it comes to holding grudges!)
But after listening to his actions prior to his court appearances? The many, many protestations of innocence? The rearranging of funds? The purchases he made while others were caring for the animals he brutalized? I'm not feeling that warm and fuzzy about him right now.
But let's go back to the book. The flaws. If you can get past the first part, you're golden. Because it does some plodding. And really. We don't need to have the "thoughts," the "feelings," stated for us. I believe that animals think and feel, but to have an author point out exactly what's going on in their heads is unrealistic and annoying. Go by their actions, their responses. Those are suggestive enough of the trauma they've suffered, what they must've endured. Those will haunt you and make you damned near cry because you'll be able to fill in the blanks very well on your own. The necropsy report on how one dog in particular died will appall and enrage you (if you have even one sensitive bone in your body).
The second flaw is the narration. Garcia isn't wretched, not the worst by any stretch of the imagination, but he delivers the text with such silences between sentences, such pregnant pauses, it's hard not to doze off if you listen after work, and you're kind of tired. (Fortunately, anger will rear it's head, and you'll wake up because of the story.) Also, it's not until the end that he slips in emotion or emphasis to what he's reading. And that's startling because really, it's unexpected at that point since he's spent most of your listening hours in something short of a monotone.
But, BOY! What a story! This is about justice. It's about fear. It's about overcoming fear and learning to trust, to love, to live and breathe. And it'll make you want to hug your dog (or cat, or hamster) and watch them as they enjoy the lives you've given them. Because some animals have never been able to run and play. Some have never known the excitement of a new smell. Some have never known the comfort of a soft hand or a kind word. And bravo to the rescue groups who step in here, most of them smaller and not so well-funded or well-known. Bravo to the foster people who really take their time and put their hearts and souls into doing whatever it takes, for however long it takes, to bring peace and joy into the lives of the abused.
Michael Vick flunked a drug test during his time before sentencing: said he smoked the marijuana because all of the stress "the ordeal" put him through. Too bad his dogs didn't have anything like pot... for what he put them through.

I was unaware of how many dogs were actually saved, I only heard of 12. I am so thankful that these babies set some sort of president to have each dog examined separately and not Just putting them all down. Frankly I think Vick should have had a worse penalty and should've never been able to own another animal ever!!

I was afraid of hearing graphic descriptions of the treatment of Vick's fighting dogs, but was able to get through the short sections (chapter 2 and some short mentions in other chapters). The chapters on the investigation, were enlightening and very interesting, but the majority of the book is about the rescue and rehabilitation of the dogs. The tales are informative, heart-warming, and really highlight that, above all of the hoopla and media attention, the real victims of the actions of Vick and his crew, were these loving, furry souls. The book has changed my view on the American Pit Bull Terrier, and I would happily adopt one when the time is right for my family. A must read for anyone who has an interest in the welfare of dogs.

This book really touched my heart, I am a advocate for pit bulls and this book will make you cry, but then be so happy for the dogs who found the homes they deserved. This book also reaffirmed my feelings for Michael Vick, he is a heartless dog killer who has no care for an animals life. After what I heard he did to the poor little red dog...no one with a heart could do such a thing to a defensless animal. I have absultly no respect for Michael Vick, I don't care how much he says what he did was wrong...he is only saying that to get back into the good graces of his fans. I use to be a fan of Vick's, but after what happened then I listened to this book, he is actually worse then I thought he was. Thanks to the people responsible for putting this book together, it shows a completely different light to Vick because it shows you just what his role was and that it was much more active in the pit fighting then he wanted everyone to think.

Where does The Lost Dogs rank among all the audiobooks you’ve listened to so far?

I loved hearing the story behind the story. So many books don't reveal all sides of a story, this one did. It never ceases to amaze me how government officials flaunt their power by disregarding complaints or attacking someone who has gotten on their bad side. The brave, dedicated, caring individuals involved in this case, from the beginning report and investigation, all the way through to the final aftermath have renewed my faith. Thank you so much Mr. Gorant for this heartwarming story.

What was one of the most memorable moments of The Lost Dogs?

When the book was describing the "antics" of the dogs after being rescued was so heartwarming. Each instance reminded me of my experiences with my own pits.

What about Paul Michael Garcia’s performance did you like?

He spoke slow enough to allow me to digest the story without having to listen a second time.

I would have loved to, but just didn't have that kind of time.

A followup "10 years later" would be wonderful.

Emotional rollercoaster . . . a must read!

Excellent narration of a wonderfully written book. There were some very sad parts, of course, but all in all, the book was uplifting as it detailed the efforts to rehabilitate the majority of Michael Vicks' canine victims. I could not stop listening. It certainly gave me a better understanding of the pit bull breed. The breed assuredly has more to honor than the evil Michael Vicks.

Love the book and the narration

I really loved this book. I never realized what happened with the Michael Vick dog fighting issue. This book really brought home the horrors of the incident, along with the challenges of the rehabilitation. Also, a lot of the specifics of the actual case and the people behind it. Once I started listening to this book, I had a hard time putting it down.

I hesitated before listening to this book because I knew I couldn't take a gruesome description of Michael Vick's dog fighting ring. Instead, the author shows the horrors of dog fighting by showing what these dogs went through when they were rescued. This is a moving story of good and caring people who make up for the heartless people like Vick and other dog fighters. It is also a story about how how we should not judge dogs or people in groups -- only as individuals. The narrator certainly enhances the story.

I wasn't expecting the character development this book has, not only of the people but of the dogs as well. It seems to be a thorough account of all the players involved in this tragic inhumane way of behaving. Heartbreaking and heartwarming account.

A Tale of Redemption

This is a troubling investigation into Michael Vick's dog-fighting operation. It will be of interest to dog lovers, sports fans interested in context will be informed, and people looking for an engaging story will not be disappointed. It is true crime "tail" with a twist. The last part of the book details what happened to each and every dog. This is the heart warming part. The stories of the the personal sacrifices that individuals made to rescue and rehabilitate these dogs is remarkable. Well written by Jim Gorant and expertly read by Paul Garcia. This is a jewel of a little book.