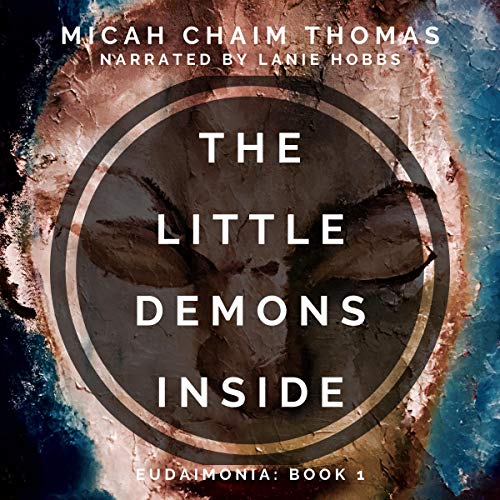 The Little Demons Inside

By: Micah Thomas
Narrated by: Lanie Hobbs
Try for $0.00

In 2017, something went wrong with the world. Or, at least, in 2017, everyone finally saw it. Henry needed to get off the streets to avoid the heat and volunteered for an experimental drug trial. The permanent side effects made his life dangerous and unpredictable.

Henry doesn't know what to do, doesn't know his place. He's a broken version of a wandering superhero. Then he meets Cassie. Their connection is brief and intense. These two lost souls are propelled together, apart, and together again in a mind-bending adventure that challenges them to face their demons.

Content Warning: This book contains vulgar language and depictions of violence and moral decay against humans, including but not limited to psychic possession and sexual acts under said possession.

What listeners say about The Little Demons Inside

A mind blowing story meant for your heart,

that you will feel it in your bones.

You've probably been through a lot of books in your life. Right now though, you're shopping for that next Audible listen. Do not let this be the one that got away. The Little Demons Inside is the beginning of my favorite series of all time. It's a book that will stick in your mind long after you've read the last page. It can be taken in on its own or in a series as a whole. I highly recommend finding the author's other works online. Micah Chaim Thomas has created hundreds of pieces of art to go along with this masterpiece. https://micahchaimthomas.com/ This is an audiobook filled with mysticism, philosophy, and metaphor but it's also an engrossing adventure the masses will love! The characters are some of the best ever written. Take the trip! Something is out there. Is it good or evil? Ask the good man. Hit play and spend time in this altered state. Get to know Henry and how he fits in with one of the sweetest yet strongest female protagonists I've read. Discover one of the most admirable characters of all time in Sanders.
I respect everything that went into this audiobook. The narration is spot on. It's a trip that every 90s kid should take but it's also a journey meant for you! This, especially so if you are somewhere in America in 2020.

Not badly written, just not my thing

A bit too political for my tastes in fiction, though at least part of it seems to have an interesting premise.