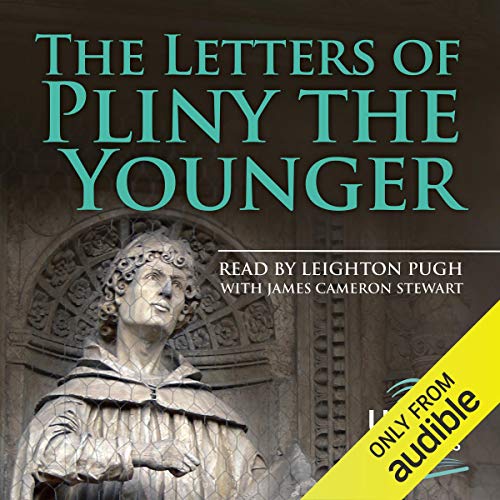 The Letters of Pliny the Younger

By: John B. Firth - translator,Pliny
Narrated by: Leighton Pugh
Try for $0.00

Pliny the Younger (61 CE-c. 113 CE) was a well-connected official in the Rome of the first century, and it is through his ten Books of Letters that we have one of the liveliest and most informal pictures of the period.

As a lawyer and magistrate, he rose through the senate to become consul in AD 100 and therefore corresponded with leading figures including the historian Tacitus, the biographer Suetonius, the philosophers Artemidorus and Euphrates the Stoic and, most notably, Emperor Trajan. The letters which flowed between Trajan and Pliny in the last decade of his life form Book X and are a remarkable glimpse into the relationship an emperor would have with an ‘imperial magistrate’. The letters are particularly well known because they touch upon key topics of the time. These include the eruption of Mount Vesuvius (in which Pliny’s uncle, Pliny the Elder, died) and his interaction with the early Christians, but Pliny also gives accounts of or comments on political events, trials, and social and domestic issues. These letters effectively allow us to meet and listen to a significant Roman of the time.

What listeners say about The Letters of Pliny the Younger

I took a long time listening to pliny's letters precisely because i think letters should be enjoyed a few at a time...like poems,epigrams...

The narrator is excellent, high praises for his performance. I wish he was contracted to do Cicero's letters...

It felt like I actually got to know Pliny as a person through these letters. The narrator was wonderful.

Pliny the Younger was born around 61AD and rose to become Consul in 100AD. His letters to his wife, friends and officials including the historian Tacitus and Emperor Trajan are full of detail, wisdom and humanity. They create a luminous picture of Roman life for a man of his wealth and stature. Leighton Pugh’s measured narration reflects the kindly thoughtfulness of Pliny’s writing. I never tire of his voice (even after over 12 hours!) - it’s as though Pliny is talking.

Famously, Pliny recorded the eruption of Vesuvius in 79AD in which his uncle with whom he lived was killed. Around 18 at the time, he was calmly reading Livy to take his mind off the tremors at the start, but was forced to escape as the sea ‘sucked into itself’, and all was enveloped in black ash and the air resounded with terrified screaming.

As an imperial magistrate, trials were his business and he comments on contested law suits especially concerning legacies, and also banishment, debating on questions such as the punishments of death versus banishment for various crimes including incest. It is striking how although nearly 2000 years separates now from then, his comments can sound uncannily contemporary. He criticises excessive expenditure by candidates before elections (sound familiar?) and pleads for a terminally sick man to be given an ‘easy death’ when he can’t be given life. It is partly Pliny’s grief which can ‘flay the heart’ at the death of wise and cherished friends and of children which makes him so real and human. One of the ghastliest deaths is that chosen by the wife of a man dying in pain from putrid groin ulcers. (She tied herself to him and jumped into the sea.) Another mental absorption is his writings and the constructive criticism which he offers to young aspiring writers.

Pliny is good to his slaves and shares the grief of ordinary people whose herds are destroyed by a tempest-flooded river. He appreciates his blessed life in his villa with its sea-views, heated pools, fruit trees and wells of crystal water which he describes in cinematic detail. Although he enjoys hunting, he never stops reading and thinking whilst out (he advises one correspondent to always take his writing tablet with him on these occasions). Too serious for Saturnalian activities, he hates extravagance and enjoys a dinner only if frugal, brief and accompanied by Socratic conversation.

This is another title from Nicolas Soames’s Ukemi Audiobooks who are brave enough to produce classic titles which you’ve heard of but have probably never read but have so much to offer us, particularly when so beautifully narrated and recorded.

Insight into the Ancient world