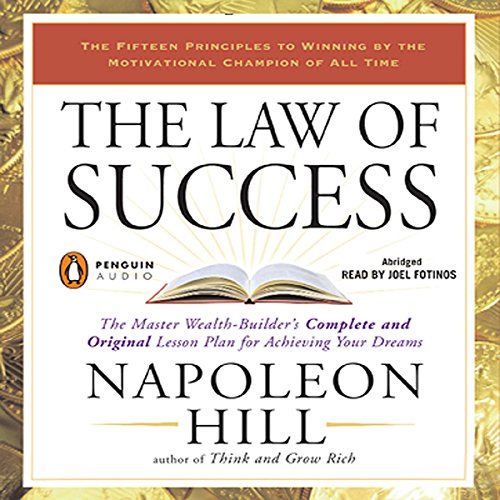 The Law of Success

By: Napoleon Hill
Narrated by: Joel Fontinos
Try for $0.00

Here is the Holy Grail of success philosophy: Napoleon Hill's complete and original formula to achievement presented in 15 remarkable principles - now newly designed in a handsome single-volume edition. This is the master volume of the extraordinary work that began the career of Napoleon Hill.

Originally produced by Hill in 1928 as an eight-book series, The Law of Success is now available to contemporary listeners. The Law of Success is the "golden key" to Hill's thought - his complete and unabridged mind-power method for achieving your goals. After interviewing dozens of industrialists, diplomats, thought leaders, and successful people from all walks of life, the young Hill distilled what he learned into these 15 core lessons, organized with an introductory chapter, "The Master Mind," that serves as a primer to Hill's overall philosophy. As Hill saw it, these lessons work as a "mind stimulant" that "will cause the student to organize and direct to a definite end the forces of his or her mind, thus harnessing the stupendous power which most people waste.

While future classics of Napoleon Hill would inspire millions of readers, there is no substitute for The Law of Success for everyone who wants to grasp the full range of Hill's ideas and tap their transformative power.

What listeners say about The Law of Success

A must listen/read !
Learn a lot from the book, really wish I came across this book sooner in my life.

The Law of Success

It was very informative wish to find more reads like it in the very near future. I will be listening to this book again.

This is not the whole book

This audio book skips parts that are in the book and completely reads things that are not in my copy. Forgive my assumption but I thought because the picture of the audio book matched the book I have that they would be the same.

will be purchasing physical book. audible is great

Great listen and read. i will be using audible regularly from now on! x x

A Must Read for Entrepreneurs

I have always worked 9-5 jobs . Now that I have changed careers and have to be a self starter..I have struggled. This book is like a window into my struggles. I know now where I go wrong.

This is my first time using a audio and I'd loved it. I plan on buying more books like this. This made my work week fly by.

This book was a very decent book, but it cannot be measured with Think & Grow Rich which was a master piece.

Great read. my second time reading it and there are things that make sense to me now that didn't before. Disclaimer : I like Napoleon Hill.

this is a great book. Don't just listen, Study these strategies and implement them into your daily routine!