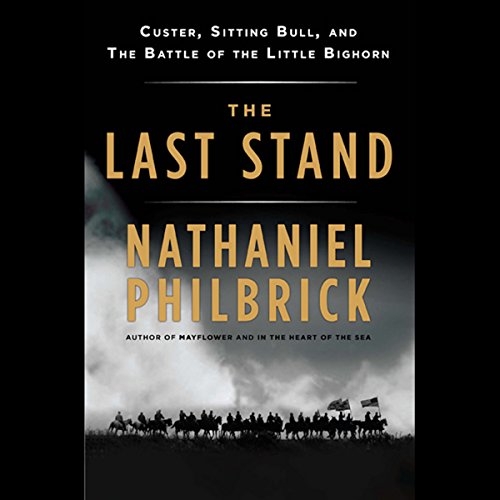 Custer, Sitting Bull, and the Battle of the Little Bighorn
By: Nathaniel Philbrick
Narrated by: George Guidall
Categories: History, American
4.5 out of 5 stars

The best-selling author of Mayflower sheds new light on one of the iconic stories of the American West.

Little Bighorn and Custer are names synonymous in the American imagination with unmatched bravery and spectacular defeat. Mythologized as Custer's Last Stand, the June 1876 battle has been equated with other famous last stands, from the Spartans' defeat at Thermopylae to Davy Crockett at the Alamo.

In his tightly structured narrative, Nathaniel Philbrick brilliantly sketches the two larger-than-life antagonists: Sitting Bull, whose charisma and political savvy earned him the position of leader of the Plains Indians, and George Armstrong Custer, one of the Union's greatest cavalry officers and a man with a reputation for fearless and often reckless courage.

Philbrick reminds listeners that the Battle of the Little Bighorn was also, even in victory, the last stand for the Sioux and Cheyenne Indian nations. Increasingly outraged by the government's Indian policies, the Plains tribes allied themselves and held their ground in southern Montana. Within a few years of Little Bighorn, however, all the major tribal leaders would be confined to Indian reservations.

Throughout, Philbrick beautifully evokes the history and geography of the Great Plains with his characteristic grace and sense of drama. The Last Stand is a mesmerizing account of the archetypal story of the American West, one that continues to haunt our collective imagination.

I could tell which way this book was leaning even before the first chapter. I finally got half way through the first chapter when I had enough listening to this liberal revisionist history. I nearly exploded when I heard the author say that General Custer overreacted in executing deserters during a military campaign. Don't waste your time with this book. There are much better history books available.

I expected to like this book more. It appeared to be well-researched, but the narrative itself was disappointing. Somehow I didn't engage. I listened carefully and found it somewhat interesting, but an episode in history that should have been truly exciting was instead a slog.

I felt the same about Mayflower by the same author, so perhaps my issue with the book is a matter of style. I was highly interested in both subjects so I'm sorry that I wasn't more enthusiastic while listening to it. The narrator was very good, but he wasn't able to overcome the writing.

I have, over the past several months, become an ardent fan of Nathaniel Philbrick. He has a gift for weaving astonishing amounts of information together in a way that is convincing, fascinating, and deeply human.

I had high hopes for Last Stand after Philbrick's spectacular work on Valiant Ambition and In the Heart of the Sea. Philbrick's talent for storytelling combined with one of the most famous stories in American history seemed like a perfect union. I'm sad to report that the book did not meet my expectations.

To start, the book does a poor job of humanizing George Armstrong Custer. While Philbrick typically develops his characters rather deeply by delving into often unknown areas of their pasts, Last Stand spends only a minimum amount of time doing so for Custer. There is little mention of his childhood, his time at West Point, or his experience during the Civil War. These things are mentioned, but mostly only in the form of anecdotes--thin snapshots of Custer's deeper story. In fact, the book does a considerably better job of humanizing Custer's (admittedly fascinating) wife, fellow officers, and opponent, Sitting Bull. I appreciated these efforts, but I would have liked to delve deeper into Custer himself. By the time Custer died toward the very end of the book, I still felt disconnected from him in a way that greatly lessened the climax's impact.

Speaking of the battle, Last Stand takes an extraordinarily long time to arrive at the titular moment on the banks of the Little Big Horn. That delay would be fine if the chapters leading up to the disaster were focused on setting the stage for an emotional punch, but, with a few notable exceptions, they are not. Instead, Philbrick, a man with an innate talent for distilling vast quantities of information into digestible morsels, seems to get strangely lost in minutia--and especially geographic and hierarchical minutia--that left me feeling lost, out of my depth, and somewhat frustrated. Perhaps this complaint is simply a function of my own ignorance, but it's a significant enough departure from Philbrick's usual flow to merit a mention.

The good news is that the last section of the book about the battle itself is spectacular. So spectacular, in fact, that it actually amplified my frustration with the book's slow, meandering method of arriving at the event itself. Here, in the dusty, blood-soaked hills of Montana, Philbrick is at his best. And his best is so good that I would still recommend this book to those interested in the Battle of the Little Big Horn despite its shortcomings.

As a final note, I found the narrator adequate. Not spectacular, but adequate. His voice and inflection don't fit Philbrick's writing as well as those of Scott Brick, who narrates many other Philbrick audio books, but he does a decent enough job to avoid being a distraction.

I enjoyed Last Stand in the end, but I had to work for that enjoyment more than I would have liked. It's definitely not Philbrick's strongest showing. That said, it's still a cut above the average historical tone. Western history buffs should definitely take a look.

Tough to follow due to a flood of dates, names, and locations on/near battlefield. Nearly 8 hours leading up to the battle, two hours detailing the battle, and the final two hours covered possible scenarios of what actually happened.

A filtered rehash for these more enlightened times

I think the author, with some prior popular and successful works behind him, took the opportunity to put a heartfelt socially-correct filter on a hash from the prior-existent books on Custer and the lead-up to the Little Big Horn. Material facts are just not related, or they are nearly dismissed - like, not of any relevance to talk about lest some wrong impression take form. Specifically, the relevant incident about the abduction by American Indians of a settler woman of the Kansas plains was ameliorated by rehearsing only that the Kansas City newspaper said that what she experienced "was unspeakable." But the length of her captivity in the tribal society and what she experienced there, is known - and *he* knows, because it's in the prior-existent books. The author apparently found it better to just not speak of it.

Not for a Novice

The book jumps back and forth through history. This is not a problem with a physical book in front of you, but is problematic on audio. I found myself lost multiple times only to learn that we had gone back 10 years. The last 5 chapters are fantastic and offer great details.

Excellent read on Custer and Battle of Little Bighorn!

I love history and recently moved to Montana; therefore, I wanted to know more about Custer’s Last Stand as well as the Native Americans involved in the encounter. I live about an hour away from the site and after listening to this book, am now ready to visit and learn even more! I highly recommend...

Aas they approached the Last Stand at Little Big Horn, Philbrick gives a new insight as to the misunderstandings and outright lies of the US Government to the Native American Indians. The book also tells a very different story about the death of Custer that I heard as a boy in school. I highly recommend this book.

The End Brought to Life


Knowing the ending when you start gives every sentence that writing-on-the-wall sense of foreboding. And when its history, you are looking to see how what you think you know fits with the facts. Philbrick structures this book by first giving the reader a look at George Armstrong Custer's military background, and some of his less than humble antics: though he was unarguably a brave and cunning soldier that instilled in his men allegiance, his arrogance and public appeal earned him many enemies among his superiors. The researched insights provided reveal the character of Custer, show the side of the man less written about. He also gives similar backgrounds on the other principal participants involved: Major Marcus Reno, accused here of being a drunkard, outspoken enemy Frederick Benteen (each a leader of two of the three columns of the 7th Cavalry), General Alfred Terry (Custer’s commander), Chief Sitting Bull of the Hunkpapa Lakota Sioux.

The book moves from these key players back and forth through the history, the politics leading up to the battle, and other events circling around the looming battle. I found this approach crisp and easy to follow rather than confusing, wonderfully executed by Philbrick. We know much of this history already, the great deceits that had already nearly destroyed the Indians, the many battles, but it was interesting to read how all of the events and personalities came together. Adding some credence to what we often have to take as speculation were the included interviews with survivors, and information from some of the archeological digs at the battle site in Montana, with the caution that there were no verifiable survivors of Custer's actual fall.

All I can add to the many reviews here is to say that an actual copy of the book is invaluable to this audio version -- the maps and photos are superb and put this on a scope hard to imagine. This was one of the best written books I've read on this monumental battle that was not only Custer's last stand, but the end of the Plains Indians.

the book was informative but a bit dull. would have liked more accounts from the Indian side.