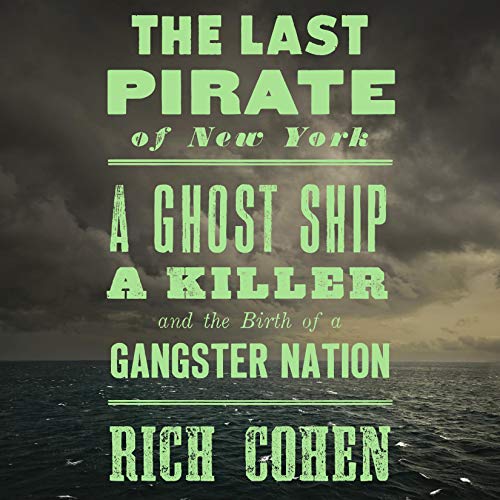 The Last Pirate of New York

By: Rich Cohen
Narrated by: Ari Fliakos,Rich Cohen
Try for $0.00

Was he New York City’s last pirate...or its first gangster? This is the true story of the bloodthirsty underworld legend who conquered Manhattan, dock by dock - for fans of Gangs of New York and Boardwalk Empire.

“History at its best...I highly recommend this remarkable book.” (Douglas Preston, number one New York Times best-selling author of The Lost City of the Monkey God)

Handsome and charismatic, Albert Hicks had long been known in the dive bars and gin joints of the Five Points, the most dangerous neighborhood in maritime Manhattan. For years, he operated out of the public eye, rambling from crime to crime, working on the water in ships, sleeping in the nickel-a-night flops, drinking in barrooms where rat-baiting and bear-baiting were great entertainments.

His criminal career reached its peak in 1860, when he was hired, under an alias, as a hand on an oyster sloop. His plan was to rob the ship and flee, disappearing into the teeming streets of lower Manhattan, as he’d done numerous times before, eventually finding his way back to his nearsighted Irish immigrant wife (who, like him, had been disowned by her family) and their infant son. But the plan went awry - the ship was found listing and unmanned in the foggy straits of Coney Island - and the voyage that was to enrich him instead led to his last desperate flight.

Long fascinated by gangster legends, Rich Cohen tells the story of this notorious underworld figure, from his humble origins to the wild, globe-crossing, bacchanalian crime spree that forged his ruthlessness and his reputation, to his ultimate incarnation as a demon who terrorized lower Manhattan, at a time when pirates anchored off 14th Street.

Advance praise for The Last Pirate of New York:

“A remarkable work of scholarship about old New York, combined with a skillfully told, edge-of-your-seat adventure story - I could not put it down.” (Ian Frazier, author of Travels in Siberia)

“With its wise and erudite storytelling, Rich Cohen’s The Last Pirate of New York takes the reader on an exciting nonfiction narrative journey that transforms a grisly nineteenth-century murder into a shrewd portent of modern life. Totally unique, totally compelling, I enjoyed every page.” (Howard Blum, New York Times best-selling author of Gangland and American Lightning)

“The Last Pirate of New York is an absolutely incredible true story. From the opening scene of a blood-drenched ship drifting in the fog, severed fingers lying on deck, to the evocative depictions of the New York waterfront teeming with murderers, mountebanks, and crooks, this is not a book for the faint of heart. Rich Cohen’s research is masterful, and he brings alive nineteenth-century New York in raucous and fascinating detail. This is history at its best, full of drama, crime, dogged detectives, curious characters, smoky taverns, and dark byways. I highly recommend this remarkable book.” (Douglas Preston, number one New York Times best-selling author of The Lost City of the Monkey God)

“The Last Pirate of New York is a riveting tale of Gotham City’s first gangster and most notorious serial killer. Rich Cohen, a superb writer and brilliant storyteller, delivers a chilling true-crime narrative - from murders to manhunt, courtroom to gallows. This book takes you to the darkest places of the human soul, and will keep you up all night once you start it.”(Linda Fairstein, author of the Alexandra Cooper crime novels)

“Rich Cohen has a knack for finding untold stories, and a talent for telling them exceptionally well. The tale of the murderous Albert Hicks is by turns upsetting, surprising, grisly, and peculiarly seductive - in other words, perfect material for this fine and original writer.” (Daniel Okrent, author of The Guarded Gate)

What listeners say about The Last Pirate of New York

Should have been a simple story of a murderer

This should have been a modest story of a common criminal, but the author fails on a few points. First of all, the writing is overly florid, with ridiculously extravagant similes, presumably to give a sense of importance on the story. Which leads to the second problem. This may have been a rather interesting story of a roguish criminal of the 19th century, but for the author's insistence to inflate the evil of the man to preposterous proportions. "He was a wolf, a predator, 'the worst man who ever lived'". The double quotation points out an additional problem. Only when I consulted the print version, did I see the last section of that quote was itself a quote. The listener never really knows what the author is stating or what he is quoting from contemporaries.

But of most concern is that the author seems more than willing to balance on a tightrope between being astoundingly gullible and being a eager huckster in the flummery. His frequent mention of P.T. Barnum in the story tends to suggest that latter. He freely acknowledges Hicks' confession as being enhanced by others, one time calling it baroque (which is a bit ironic, considering his own tendencies). Yet he presents the astonishing accounts of Hicks' legendary life of crime as if they were fact, without any substantial corroboration. Similarly, he introduces phrenology into the story, rightfully mocking it with a modern eye. But he uses the same phrenological assessments to support the idea that Hicks was evil, bereft of spirituality. (The subtext of spirituality and religion gets scarily close to proselytizing as well).

And finally, the connection to "the Birth of a Gangster Nation", is tenuous at best. He's the guy who gangsters said that gangsters who came before said the gangsters before them talked about. You get it. I admit, I gut sucked in by the title and the idea of a grand adventure. It's just not there. And if it were, the author would have drowned it in purple prose anyway.

not as interesting as it sounds

not reccomend move on

Great book. Highly recommended. Thanks for the suggestion Ben Shapiro. If you like crime books, this is for you.

An interesting story about a cold blooded killer but also a remarkable adventurer in a by gone era. As much as times have changed, it’s remarkable that people and the crimes they perpetuate haven’t changed much. We still have gangsters and pirates that act out against society as Albert Hicks did. I especially liked the historical information about New York. A good summer read!

A somewhat obscure story that really comes to life and paints a great portrait of the times. The narration by Mr. Fliakos is excellent, the narrative leaves you waiting on the next twist and turn.

Half fact, half fiction

This career criminal wasn't a member of a gang as we know the term. He was a regular pirate who became notorious for three grisly murders at sea. He'd get a job on a ship and look for an opportunity to steal, common at the time. If he was a gangster, all pirates were gangsters, and there were many pirates before him.

Of all the Rich Cohen books I've listened to, this is the only one I wouldn't recommend. Rich Cohen is one of my favorite authors and I most highly recommend: The Fish That Ate The Whale. Cohen can tell a story but it doesn't work when based on hearsay. This is the first book I know of where Cohen uses a fictional account as if it's been substantiated.

Now for this story, the three grisly murders at sea are the main subject. Other parts of the pirate's life where he supposedly lived in Latin America in great wealth are only supported by what the pirate said in the final days of his life when he was making money by selling his own biographical information in an effort to provide for his wife. In other words, a great deal of this book is based on pure fiction.

This book has no idea how to get out its own way. The language is gratuitous and distracting. The story, such as it is, has little to do with the supposed premise of the book.

The narrator knows no subtlety. Every sentence is forced. Everything sounds like it was written in italics and/or it was his first time encountering that text. The impressions when he's reading quotes aren't half bad though.

I loved this book and the narration! So full of research and told so well!

read this fascinating story that I'd never heard of before. bought his other book too

I loved this book. The history of NYC is fascinating. This was the fastest 7 hours!