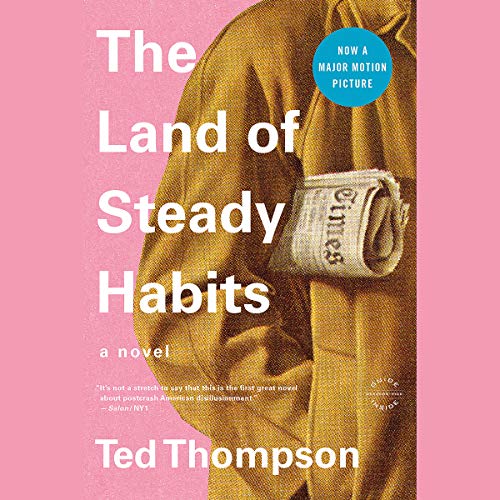 The Land of Steady Habits

By: Ted Thompson
Narrated by: uncredited
Try for $0.00

Coming of age can happen at the strangest times. For Anders Hill, long ensconced in "the land of steady habits" - the affluent hamlets of Connecticut that dot the commuter rail line - it's finally time to reap the rewards of a sensible life. Into his 60s and newly retired, his grown sons' college tuitions paid in full, Anders finds the contentment he's been promised is still just out of reach. So he decides he's had enough of steady habits: he leaves his wife, buys a condo, and waits for freedom to transform him.

But as the cheery charade of Christmas approaches, Anders starts to wonder if maybe parachuting from his life was not the most prudent choice. Stripped of the comforts of his previous identity, he turns up at a holiday party full of his ex-wife's friends, and sets in motion a series of events by turns comic and catastrophic. Before the year has turned, he has to face the startling possibility that the very world he rejected may in fact be the only one he needs.

Charting the arc of a 40-year marriage, this finely observed novel about a man deep in conflict with his community and his past brings into sharp relief the powers of memory, miscommunication, routine, and disappointment, to shape and define a family's mythology. The Land of Steady Habits introduces Ted Thompson as an auspicious talent with striking compassion for his characters and new insight into the American tradition of the suburban narrative.

"With impeccable prose, dry wit, and uncommon wisdom, The Land of Steady Habits combines Austen's shrewd mastery of domestic economics with Updike's compassion for the melancholy commuter to make something elegant, fresh, and brilliant." (Maggie Shipstead, author of Seating Arrangements)

What listeners say about The Land of Steady Habits

I believe perhaps, this was written by Eeyore. I listened to it and was glad when it was over...

Excellent....but who is the narrator ?

Well written and insightful examination of a mid-life crisis. Who is the narrator ? He did a great job ! ( especially for no credit )